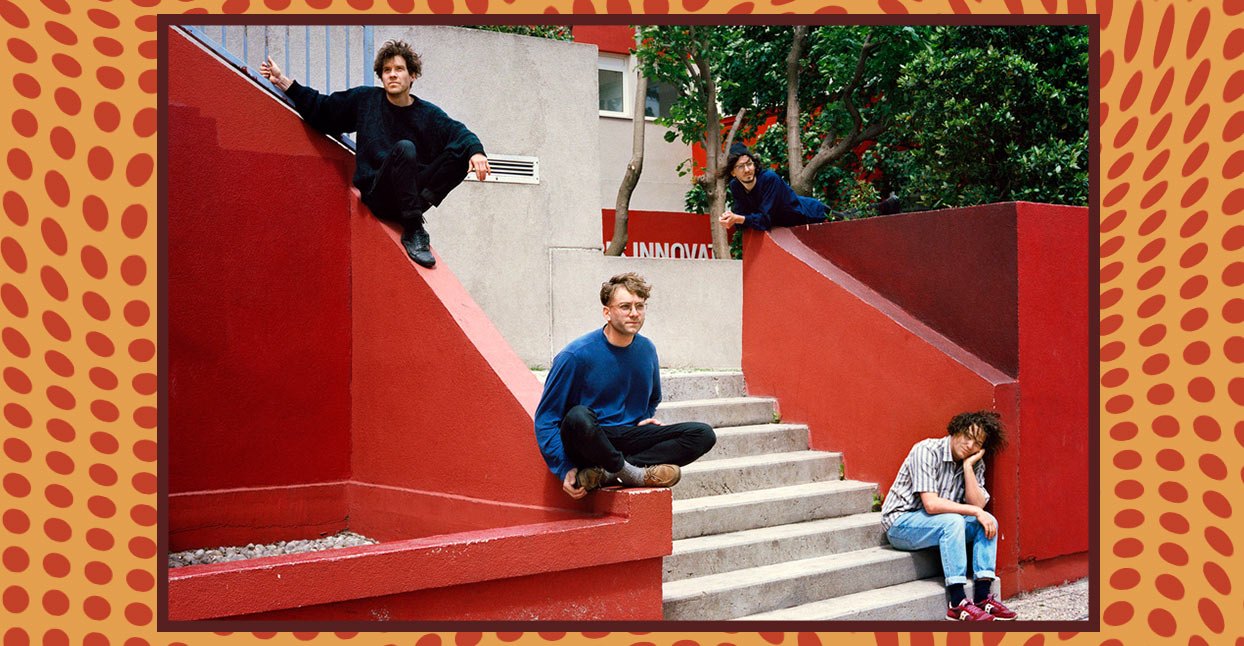 In the early days of 2019, the Montreal-based Corridor became the first Francophone act ever to sign to Sub Pop. For an independent institution known for its wide-ranging roster, an indie rock band that makes hypnotic rock music doesn’t necessarily seem like a novel addition. But for a DIY Québécois band that spent the majority of its lifespan playing shows within their home province, a record deal with a U.S. label, especially one as legendary and esteemed as Sub Pop, seemed unattainable.

“We wanted to grow as a band, but we never pushed it,” says Dominic Berthiaume, Corridor’s vocalist and bassist. “This was the first time that we actually pitched the album to some record labels in the U.S. Before that, we thought it would be putting too much energy into something that wouldn’t work.”

The band asked their recently hired manager Ouss Laghzaoui to send their new material to “anyone that could be helpful,” says Berthiaume. “Sub Pop said they were interested, and saw us in New York. A few days later we received a record deal in our email inbox. It was as simple as that.”

Getting to that moment, however, was not so simple. Despite the province having its own self-contained music industry, one where government grants, physical sales, and tireless local gigging help float careers, many of Quebec’s homegrown musicians only ever break into French-speaking markets, such as France and Belgium.

Corridor had gained some momentum in France, where they played some shows in support of both their debut album, 2015’s Le Voyage Éternel, and its follow-up, 2017’s Supermercado. Having their music available to sell and stream on Bandcamp was a factor in their audience growth.

“For our first EP we were relying 100 percent on Bandcamp,” says Berthiaume. “It was pay-what-you-can, and people actually paid for the music.”

In 2018 they decided to apply for South By Southwest, which changed everything. “We never wanted to go there because our friends’ bands said it was a waste of time and money for a French band,” Berthiaume says. “But we said we’d give it a try and see how it goes. We had seven showcases, some really good ones.”

It was in Austin where Corridor befriended some bands they’d never had a chance to play with previously. “We met Snail Mail. We met Crumb. Through Snail Mail we met Shame. The next time Shame came to the U.S., they invited us to play with them,” Berthiaume explains. “We are very grateful to these three bands, because they are literally the only ones that wanted us for support. After that, we knew we could play headline shows and it would be fine.”

They began to notice their own fan base was growing, and that people were coming out to see them play, not the headlining band. “You go to Nashville and you never expect to see people go crazy,” says Jonathan Robert, who also sings, plays guitar and synths. “A guy showed us his leg, and he had this tattoo of [the artwork from] our last album.”

Now with their third album, Junior, Corridor will introduce Francophone rock to a whole new audience, and hopefully open doors for their peers. With their strong melodies and propulsive rock structures, which reference everything from shoegaze and post-punk to Krautrock and psych, the band aren’t worried about any language barrier getting in the way.

“It’s not about the importance of the language,” says Robert. “We started to write in French because it was easier for us and we felt more comfortable with that. I think that was maybe part of the charm in the band for people. I mean, we don’t really get what the singer of a death metal band is singing about.”

“It’s always been our thing to sing in French and it won’t ever change. But even people in Quebec and France don’t really understand the lyrics,” adds Berthiaume with a laugh. “Hiding the vocals in the mix was part of the aesthetic that we wanted to bring to our sound. Even if they were French-speaking, people would have to listen to the album three or four times to really understand what we were saying. Our songs are not really about [singing] along either. For us it’s just natural that nobody sings when we play.”