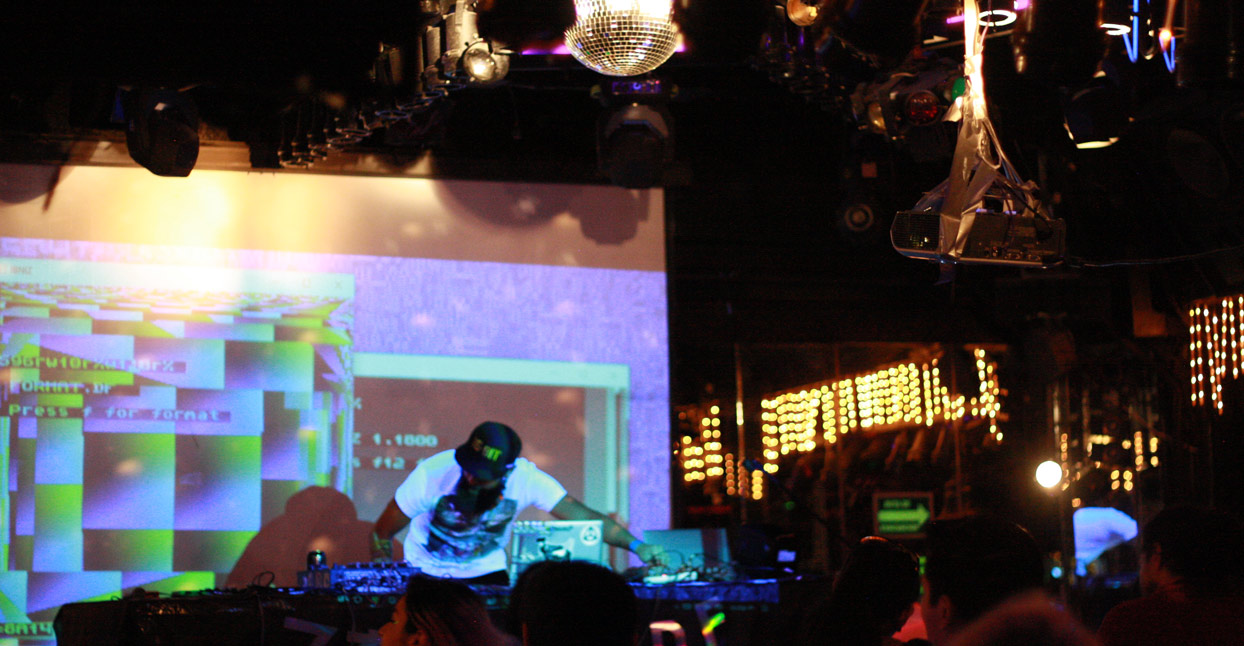 Chema64’s 2015 album Viziers is an unrelenting, video game-inspired assault of hyper-percussive blips, burps, explosions, and cheesy, retro, repetitive cranial misfirings. It’s like being trapped in Tron, if Tron were on fire. The opening track starts with a cascade of laser blasts before a jackhammer Atari march comes in. It keeps on like that for 35 minutes, without a break. It is brutal and ridiculous and glorious.

Chema64, aka Chema Padilla, is at the center of a small but inventive chiptune scene in Mexico. ‘Chiptune’ refers to music made through the manipulation of sound chips in early gaming systems—or, as Padilla puts it, “It’s like using a synthesizer, but instead of twiddling with knobs on a Korg, you use a Nintendo Game Boy from 1989.” It’s a time-intensive process. “Some songs flow very naturally in just, like, eight hours,” Padilla says, “and others take 16 hours to feel complete. And that’s counting only composing, not recording or mixing.”

Chiptune, in one form or another, has been around for decades. Yellow Magic Orchestra’s 1978 self-titled debut used video game samples extensively, and provided something of a sonic blueprint for the chiptune sound. Video game music has occasionally gone mainstream, as on Kesha’s 2009 hit “Tik Tok,”  and there are some relatively well-known indie artists who work in the genre, such as the Los Angeles-based 8 Bit Weapon. But for the most part, the scene has remained a niche interest, a secret language in electronic tones decipherable only by those with the inner software to hear its particular arpeggiated runs.

Padilla got hooked when he accidentally came across chiptune on the Internet back in 2006. He started making his own tracks in 2007. His early work is a bit more lyrical, though you can hear foreshadowings of the gloriously dense monstrosities to come.

“I guess chiptune really spoke to my personality, the possibility to tinker with electronics, music, and the video games from my childhood at the same time,” Padilla says. “With time, I understood that I really like the aesthetic. There’s a uniqueness in the sounds and graphics made from the choices of engineers. It shows you how much of our culture is driven by technology.” He adds, “I guess the main appeal, other than nostalgia, would be that chipmusic is an easily approachable way to get into music or art. It starts as a game and a challenge, and it teaches you to do things yourself, to share with other people. In my case, I’ve met wonderful people who have changed my life in profound ways.”

Chiptune for Padilla isn’t just music, it’s a community. One way that he’s connected with other chiptune creators is through his netlabel, 56KBPS. He started it soon after he began making his own tracks, and since 2007, the label has put out dozens of releases from Latin American chiptune artists.

One delightful recent release, by Plastic Dungeons, is a Star Wars tribute featuring chiptune versions of composer John Williams’s themes. If you’ve ever wondered who would win in a fight between Darth Vader and Pac-Man, wonder no more. Another recent release is Sangre, by an artist named analog from Valparaíso, Chile. The album mixes chiptune with grimy feedback noise and stuttering distorted beats. It sounds like all your video games have rusted over.

In 2012, Padilla was contacted by Estuardo Rendón, a chiptune promoter, organizer, and enthusiast. The two of them were among those involved in organizing Mexico’s first chiptune festival in 2012, called 1 Lengua: 8bits (“One language, eight bits”). It’s sparked a yearly event called Format.DF. “We try to showcase the best chipmusic artists from Mexico and from around the world,” Padilla explains. The festival includes free workshops and conferences. Chiptune legends like Goto80 from Sweden have attended.

Along with the festivals, Rendón and Padilla organized a permanent group of like-minded chiptune artists, Colectivo Chipotle, to do events year-round. The group hosts shows and workshops throughout Mexico, featuring video game art as well as music.

“One of the cool facts about the Mexican chiptune scene is that it is not restricted to one or two of the big cities,” Rendón says. “We have artists spread all over the territory, some from places you’d never imagine, like the mountains of Chiapas, some other city next to the Gulf, or far off north next to the border, in literally one-street isolated towns. I think this is all due to the Internet, and, to some extent, to the very principles behind chiptune music, that teaches you how to make more with less and to not expect any kind of tutorage. Currently, we have over 20 members from more than 10 states.”

Under Colectivo Chipotle/Format.DF, Rendón and Padilla have released a number of compilation albums over the years. One of the most inventive was Chipfolk, a 2013 anthology in which artists created tracks based on traditional Mexican folk songs. Eme7h’s industrial take on “Nopliche,” which sounds like a festival inside a malfunctioning factory, is a highlight, as is Noiseman’s maddening round robin “Sobre las Olas,” which U.S. listeners will recognize as the tune to “George Washington Bridge.”

To celebrate the five-year anniversary of Colectivo Chipotle, the group is organizing a third volume in their Chido-Chip (or “cool chip”) series (an official release date is still yet to be determined). “The scene and we are not the same as it was in 2012, and we want to offer a love letter back to fans and friends,” Rendón says. New tracks will include the menacing and surprisingly danceable “Laser Guided Democracy” by Josh Query and the 8-bit Exorcist demonic blip growls of “DEAR SATAN” by Brysamo.

Chiptune fosters community in part because it is about shared memories and a shared process, as well as a shared aesthetic. “What I like about chiptune music are the limitations to create it,” Néstor Ovilla, aka Crab Sound, an artist from Tuxtla Gutiérrez, Chiapas says. “I like exploring, and I see those limitations as a challenge—almost like a sport. I also love the fact that the old consoles are like a musical instrument, just like a piano or a guitar, that channels your creativity. It is up to you to be creative with what you’re given.”

Ovilla’s latest release takes that brief and runs with it: On Vapor Bodies, he teams up with Marla Micaela to form Sonido Calzeta!, a combination of chiptune, trap, and noise with actual vocals—an almost unheard of innovation in chiptune. “Mi Mama Es Dracula! (VIP)” sounds like cheerleaders chanting encouragement in an arcade, nicely encapsulating Colectivo Chipotle’s vision of retro-computerized bonding.

Chiptune is cheery music—fast, bright, and vibrant. But in Mexico, the folks behind the vivid blooping can struggle with isolation. “To pursue any kind of musical endeavor, let alone chiptune, in Mexico can be claustrophobic,” Rendón notes. “There is little support from the government and the private entrepreneurs are hardly interested in any form of expression that won’t turn the audience into passive consumers. These kind of problems, one way or another, crawl deep into the narratives and the very essence of the music created in Mexico by any sincere chiptune artist. I can tell you that, thanks to Colectivo Chipotle, I’ve met terribly talented young people, who, at the same time, are terribly forgotten, lonely, and underappreciated.”

Chiptune doesn’t have a huge audience worldwide, and even less of one in Mexico. But Rendón and Padilla have helped far-flung creators find each other, and put their laboriously synthesized sounds together.