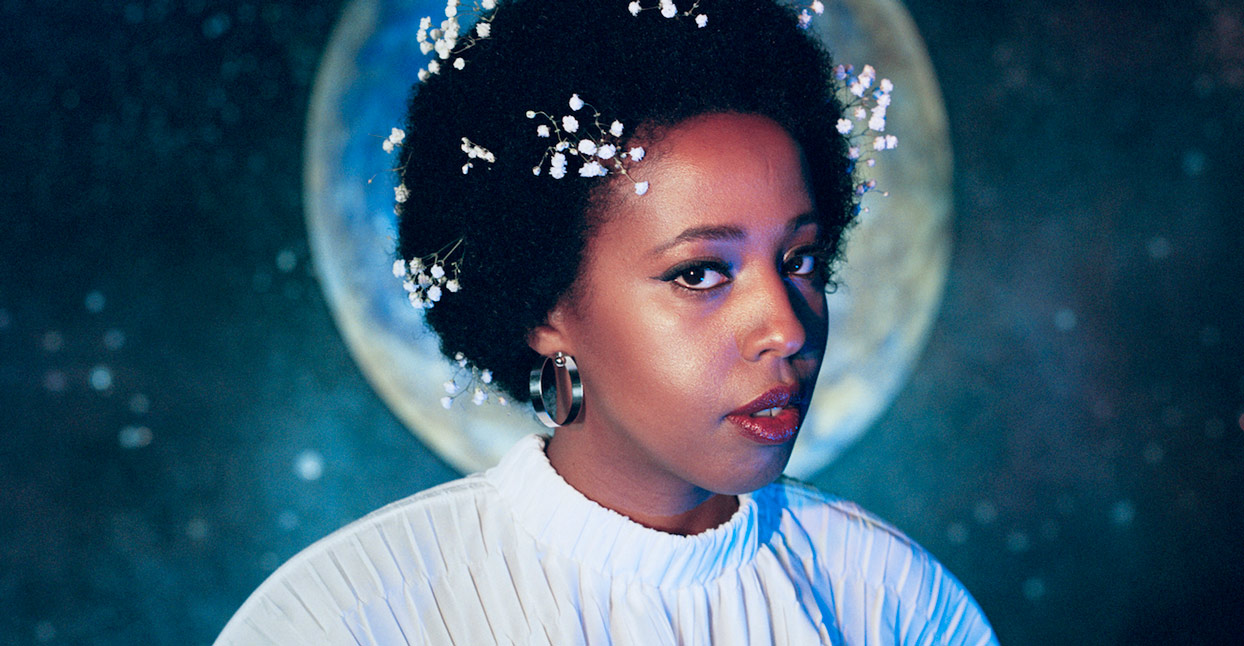 There’s an old Somali idiom that goes, “Kala garo naftaada iyo laftaada,” which loosely translates to mean, “Understand the difference between your bones and your soul.” Ladan Hussein, aka Cold Specks, sings this expression on her new album, Fool’s Paradise. She delivers the line in Somali, the first time she has sung in that language on record. This is not insignificant: Hussein was born in Canada to a family of Muslim Somali refugees, a fact she has kept largely under wraps—along with most details, small or large, about her identity—until now. Up to this point, Hussein has gone by the pseudonym “Al Spx,” a way to keep the world from knowing too much about Ladan Hussein.

But now, after a heaping dose of self-love and many hours spent watching footage from Somali VHS tapes on YouTube, she’s discovered a deeper understanding of and love for her heritage, and the way it impacts who she is. “I love myself endlessly,” she says. On Fool’s Paradise, she embraces all of the things that maker her who she is, in rhythmic, expansive music.

Hussein spoke with us from her home in Toronto about her family history, why she thinks she’s a pretentious lyricist, and receiving prayers on WhatsApp.

Let’s talk about your new record, Fool’s Paradise. On it, you sing in Somali for the first time. How did you decide this was the time to do that?

There’s one song, it’s the title track, ‘Fool’s Paradise,’ I sing an idiom. It just seemed like the most natural thing to do with that song. The themes lyrically, sonically—that song deals with my identity as a Somali Muslim woman, as a black Muslim woman in a crumbling world that’s out to get people who look like me. It just felt like the most natural thing to do. I didn’t analyze it that much. The idiom was something my grandmother used to say. It means to understand the difference between your bones and your soul. It was something I just kept singing to myself when the Muslim ban was put into place. Somalia was one of the seven countries, and I had to learn to detach and disconnect because it became far too much. I started seeking ways to self-care.

Do you sing in Somali to yourself when you’re alone?

Growing up, there was this shop in Toronto called the Somali Hall of Fame. It’s a music shop with cassettes and VHS recordings of old songs. My family has a huge collection from there, and we’d always play music. I always listened to Somali music growing up. I can sing a number of songs, and my dad and I would harmonize. It was always around growing up.

And your father was in a Somali band. Was that before you were born?

What was it like to find footage of his band online and learn about that other part of his life?

I’d always heard about it, but never really listened to it. It wasn’t a deep dark secret. It was something that was always mentioned, but that I didn’t care enough to research as a kid. When I found out more details a couple years ago and was digging into it, I’d always listen to the music because I felt way more connected to it. It was a wonderful and beautiful, yet strange, thing, going online and discovering images of my dad on YouTube. I found this old grainy picture of him from the 70’s on the Internet. I don’t have a copy. It’s beautiful, but wildly strange at the same time.

When you grow older, you become more of a friend to your parents, and they open up to you in ways that they didn’t necessarily when you were a child or teenager. We started talking about what his life was like in the ’70s, and the music scene there. He introduced me to a lot of wonderful singers, always female singers too, which was something quite nice. He introduced me to a number of musicians and singers, and we’d go on YouTube and watch their videos, like these VHS recordings of live performances, as well as really beautifully cheap music videos. I actually just did a music video recently based on that concept: VHS, old Somali imagery.

Who are some Somali musicians that have really inspired you?

I’ve been really inspired by a singer by the name of Saado Ali. I love her voice. Fadumo Kasim is another one. Hibo Nura. I grew up on all of that—but I also grew up on Destiny’s Child and Aaliyah. I am truly a child of the diaspora.

Are there any elements that are common in a lot of Somali music, like instrumentation or song structure?

There’s sometimes an oud, which is like a fretless lute, and there’s just this voice over this beautiful, warm, rich tone of an instrument. A lot of times it’s just these textured funk and jazz songs with these analog synthesizers and stomping basslines, and everyone is just incredible. There are so many skilled musicians from that time that it’s unbelievable. A lot of the focus used to be just on the female voice, which is really interesting. People worshipped these women, and they dominated the music scene [like Maryam Mursal—ed.].

How did all of this music influence your new album?

The new album was influenced by a number of different sounds, but I definitely was inspired by all these VHS recordings on YouTube. I spent a lot of hours going through many videos, analyzing them and dreaming of this place I’ve never known. All of that definitely seeped through to the recording process. I feel like young Somalis in the diaspora are doing quite a lot of corrective work, because the narrative of Somali people has been quite negative since the Civil War. People didn’t discuss the country until it fell apart. It didn’t exist until it crumbled. It’s very sad but I felt compelled that I needed to bring some kind of beauty and light, so that’s what some of those songs are about.

For some artists, lyrics are a huge deal, and some artists don’t pay as much attention to them.  What place does writing lyrics hold for you, especially in relation to the new album?

It varies every time. I used to be quite a pretentious lyricist. The title of the first album is so pretentious in retrospect. I Predict a Graceful Expulsion is far too long.

Neuroplasticity is my favorite of your titles.

That as well. I told myself I was going to go for one word, and I picked a stupidly complicated one. I’ve learned not to analyze it too much. Like a song like ‘Wild Card,’ for instance, I just started humming ‘I’ll be there for you. Don’t know why.’ I didn’t analyze it. Sometimes the simplest things are the things that work the best. Sometimes I can analyze it too much. The title track, for instance, ‘opened up like a torn-out eye.’ I sometimes spend a lot of time on metaphors and imagery and I sometimes don’t.

At the end of your song ‘Exile,’ is that you talking?

It’s a prayer from my mother on WhatsApp. She’s praying for me to have all the beauty and greatness I want in the world. It’s just a really loving, sweet message that she sent to me on WhatsApp. I just stuck it on the end of the album. I didn’t tell her until it was done.

Is the prayer something she wrote herself, or is it a pre-existing prayer she recited for you?

Now that you’ve watched all the VHS footage and worked on finding a way to cope with all the anti-Muslim sentiment, do you feel like you’re more in touch with your family’s life in Mogadishu?

I’ve always heard these stories of what their life was like before the war. I’ve always felt in touch and connected. I think I’m just more publicly speaking on who I am. Because people don’t know what Muslims look like. They don’t know what a refugee looks like, like my parents or my sisters. My whole family are refugees. When the Muslim ban happened, it was my birthday and I was about to fly to New York and my sisters couldn’t come with me because we were uncertain. Again, I feel like this is the case with a lot of young refugees, Muslim, black, there’s a lot of corrective work happening which is unfortunate but necessary.

In the past, you’ve said that you needed a stage name to keep yourself separate from your music. It seems like this album is more autobiographical and more intimate, and I think you were saying that was a conscious decision. Am I reading that right?

The first album was a brutally honest record. I toured that record endlessly, and it became very difficult for me. I had to, for my own self, separate myself from the music. With Neuroplasticity, I made a conscious decision to be vague lyrically, to write about things other than myself. There was no personal element. The last song, maybe, but for the most part, I had separated myself from the music. I have learned that I don’t need to do that anymore. I am also comfortable and happy and I love myself endlessly. There were a lot of self-love issues in the past as well. It was also, I think, analyzing it now, elements of erasure. There was a fear. I didn’t feel safe having a name like Ladan Hussein. People always misspell my first name. They assume there’s an ‘e,’ like Laden.  It’s been like that since 2001. I didn’t feel safe attempting to achieve success in this business and so I hid. I hid, and I think it was foolish, and there were a lot of self-love issues, but that doesn’t exist anymore. I don’t carry them. I am who I am. You can join me or fuck off.