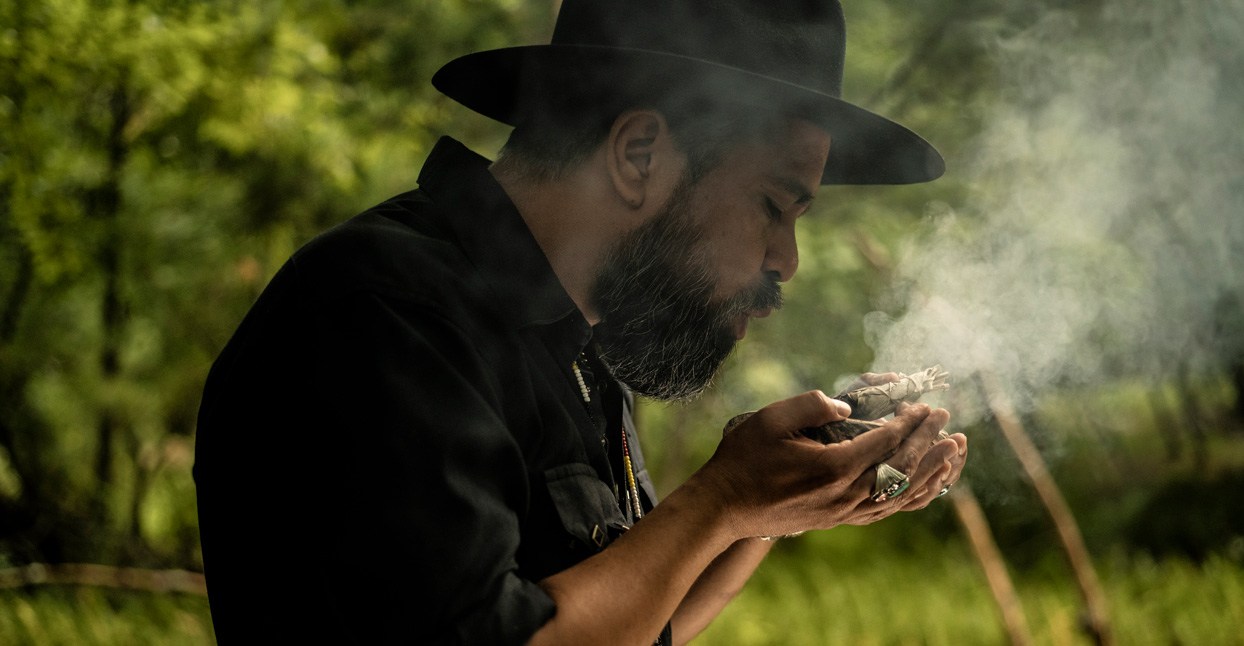 The C.V. of saxophonist Cochemea Gastelum runs deep and wide. As a 10-year member of the Dap-Kings, he’s toured with Sharon Jones and Antibalas, played for Amy Winehouse, and was a soloist in the Broadway show Fela! His latest project explores new terrain: A California artist with Yaqui and Mescalero Apache Indian ancestry, Gastelum uses his solo debut, All My Relations, to investigate his own personal legacy, one he once thought was lost to time.

Gastelum grew up in a musical family. His grandfather was a musician who taught all of Gastelum’s “aunties and uncles” to play instruments. It wasn’t long before Gastelum followed suit; he took up drums when he was in second grade, before becoming “seduced,” as he puts it, by the warmth of the saxophone five years later. Because he grew up listening to jazz, that genre became a natural starting point when he began making music of his own many years later.

But Gastelum’s Native background didn’t figure into his musical childhood. Though his mother was involved in the Native community, he grew up without knowing his Yaqui father, who was estranged from his mother, and had passed away when Gastelum was a child. He felt confused and distanced from that part of himself, despite bearing a poignant Yaqui name (Cochemea means “they were all killed in their sleep”).

“I grew up with this name, and knowing where I came from,” he says, “but it wasn’t too informed beyond that.” About two decades ago, one of his cousins located Gastelum while researching their family tree, and he was reunited with his father’s siblings and their children. “It’s almost like I was a forgotten part of history,” he says. Gastelum’s mother had always told him that his father was a celebrated figure in the family, a gifted sculptor, carver, and versatile guitarist. But Gastelum’s father had also passed on many Native traditions to family members, who then shared some of those traditions with Gastelum. While he had always grown up aware of his father’s legacy, his extended family shared with him the way his father had touched their lives. “Everything came full circle,” he says.

All My Relations began taking shape as Gastelum began further exploring his Native roots. At the same time, he and fellow Dap-King Gabe Roth were diving deep into the music of jazz percussionist virtuoso Sabu Martinez while on the road with the band. Gastelum and Roth (who produced and plays on All My Relations) began discussing a possible album born of these twin influences, taking melodic information normally conveyed by chordal instruments and, as Gastelum says, “putting it into the drums.”

Gastelum centered the album around the philosophy of “all my relations,” a phrase used in many First Nations gatherings to refer to a universe where everyone and everything has a purpose, and deserves respect. In the spirit of that philosophy, Gastelum and Roth recruited a stellar ensemble of New York musicians, and the group began improvising and writing together, bringing all of their musical and cultural backgrounds to bear in the final product. (For the first session of two, which produced about “60 percent of the record,” the musicians arrived without any songs, instead recording an almost 24-hour improvised jam session.)

For the title track, Gastelum specifically wanted the feeling of pow wow drums. Roth added rhythm from the three-stringed Moroccan gimbri—a lute used by the Gnawa people—and the song is topped with a simple, gang-chanted phrase: “Ain’t gonna build no wall.” On “Mitote,” Sonny Jain, from the acclaimed bhangra/hip-hop/jazz ensemble Red Baraat, provides the ricocheting sounds of tabla and dhol, and Reinaldo De Jesus, the master conguero from Antibalas, complements it with the steady, percolating rhythm of the South Indian frame drum kanjira.

Gastelum rounded the album out with three new compositions: the Gato Barbieri-inspired “Seyewailo” (“Flower World” in Yaqui), which manages to be both meditative and swinging; the bossa nova-flavored “Sonora,” which is named for the northern Mexican state that is homeland to the Yaqui; and “Mescalero,” inspired by the Mescalero Apache heritage of his great-grandmother, as well as the folkloric beats of the Mexican huapango. On these songs, Gastelum specifically “delved into roots, imagery from my background,” focusing on the concept of “all my relations” to tie the contents of the record together.

The album marks the beginning of a journey for Gastelum, incorporating his connection to Native spirituality and his ancestors in his music, as those beliefs keep him “grounded and centered.” He’s now a participant in the pow wow that his family hosts annually in California, and says, “Going into my roots—there’s an endless amount of inspiration there—and to use music as a vehicle for that discovery has opened up a lot of doors and different pathways.”