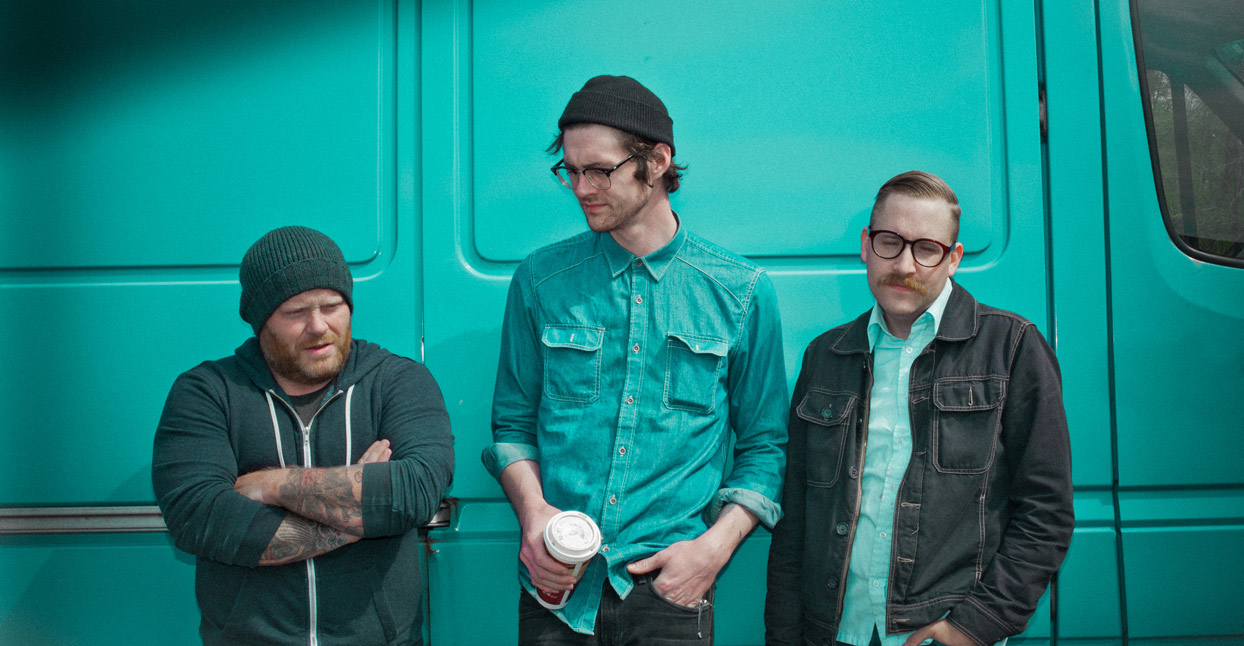 Since their inception in 2012, Cloakroom’s music has reflected the industrial Midwestern environment in which they live. Their first EP, 2013’s Infinity, set the foundation: melodic, subdued croons backed by half-time alternative rock. Since then, Cloakroom has inhabited a unique space in ‘90s-inspired rock music, taking elements of shoegaze, doom metal, and slowcore to create an atmosphere that is by turns harrowing and oppressive.

Cloakroom’s latest offering, Time Well, is a testament to their progression as a more sonically experimental band. Now signed to metal label Relapse Records, their sound has made way for more washed-out, ambient moments, allowing frontman Doyle Martin’s lyrics about the desolation of humanity take center stage. Writing and recording Time Well in a homemade studio on the outskirts of Indiana—which Martin describes as a “bunker disconnected from time and reality”—allowed the band to get lost in their songs, without any distraction from the outside world. Streamlining the recording process was necessary to create a record like Time Well, which looks outside of traditional hard rock for music steeped in shadow and atmosphere. Martin spoke to us from his home in Michigan City, Indiana.

You’ve talked before about the ways your environment impacted your music. In what ways has that desolation influenced Time Well?

In our little pocket of northwest Indiana, we’re in a weird time zone, with a lot of interesting biological peculiarities. Maybe at first glance, our environment can feel like a very barren, desolate place—and to some degree, it is. But there’s hidden beauty in all of that, which is what we wanted to get across in Time Well.

How does that hidden beauty relate to you? Do you ever find mundanity inspiring?

Absolutely. For example, our band name might sound cool to someone who might not know what a cloakroom is, but in reality, it’s just a closet. It’s so mundane. Maybe our music is a little mundane, too, given how somber it can sound. It’s all about finding a something a little more spectacular in this very average world we’re walking around in.

If you don’t try to find some kind of majesty in the banal things around you, you just end up shriveling up.

That’s exactly right. We like to apply that to our music videos, too. Our buddy Alex Henery from Basement shoots all of our videos—it’s sort of a tradition now. He flies out for a few days and we just drive around, looking at these rural, abandoned buildings, and he decides he’s going to make them look graceful, because he’s got an eye for it. Someone can look at a grain silo and think, ‘It’s just a grain silo.’ But the way he looks at it, he’s like, ‘It could be the perspective from the bottom of a well!’ He’s a British dude, and when I see him picking up on the stuff we think is beautiful around us in the middle of nowhere, it’s really reaffirming.

The cover of the American spiritual ‘Hymnal’ on Time Well is slow and brooding in a way that other covers haven’t attempted. Your version of it sounds like some sort of beautiful, macabre lullaby. Has religion had any influence on your music?

We covered ‘Hymnal’ because my ‘ma was a cantor, and she’d drag me to choir practice all the time. I was really young, but I remember that song being creepy as fuck. I’d look up from my Goosebumps book and be like, ‘What?’ He’s getting nailed to a cross? What’s going on?’ I thought it was really morose. But that’s what I really love about the song. It’s gripping, and it always reminds me of that part of my childhood.

Was there religious imagery around you growing up?

Religious mysticism has always been so cryptic and intriguing to me—even just the thought of people believing in this great good, but also in this malevolent force of evil, blows my mind. My biological father was a big gambler, and I was probably named after the famous card player Doyle Brunson, but there’s also this nun that my mom and my aunt befriended called Sister Doyle. She moved to New Mexico, and we’d always visit her whenever we went on vacation to Colorado. She was this amazing Irish woman who would just love to go on long walks and be around nature, and I always thought she had this witchy thing going on. I felt like she was really in tune with whatever she was doing, and that was very cool to see growing up.

Are there any overarching lyrical themes on Time Well? It’s interesting how lyrics coincide with, or juxtapose, the mood of a record.

I like my lyrics to be ambiguous so that people can attach their own meanings to it. I’m pretty happy to never be a songwriter that lays it out bare. Some people interpreted ‘The Sun Won’t Let Us Go’ as a metaphor for a toxic relationship, but it was inspired by an environmental debate in my college biology class. A lot of people didn’t believe the Earth is rotting underneath us, despite concrete proof, and this whole class discussion drove me to write the lyrics.

Considering you’re surrounded by so much odd, natural beauty in Indiana, that must’ve been a difficult conversation to sit through.

Have you ever heard about the Voluntary Human Extinction Movement?

No, but it already sounds wild.

Basically, this guy Les Knight started this movement, and he believes humans should stop procreating, naturally die off, and let the planet recover from all the damage we’ve done to it. The way he talks about it makes you wonder whether there are any legs in his theory.

That theory is hard to grasp because survival is our life objective, and self-preservation is in our human nature—but the reasons behind it, in some abstract way, make sense. How do you self-preserve?

By driving to Chicago and partying ’til 5am [laughs]. Even though I love Chicago, I’m not the kind of guy who can get buses and trains and all that shit. I think because we’re a bit isolated up here, I preserve myself by giving myself space. I think everyone needs a bit of isolation in their lives—it becomes ritualistic in a healthy way.

Some listeners have interpreted the sonic aggression in your music as a defense mechanism for the true depression at its core. Would you say that’s true?

I wouldn’t say we’re aggressive, but we’re passive aggressive. I guess that could be a defense mechanism. We’re not depressed but we’re disappointed. The best way to put it is that we’re slightly aggressive and slightly depressed.

And that itself can be cathartic; almost like you’re fighting sadness off with sadness, and somehow it becomes a source of comfort.

I totally get that. I don’t think our music is very overstated, or out in the open—it’s moody, hidden. I’m attracted to those same qualities in music that you get from bands like Joy Division and The Cure because it triggers something in us and keeps us interested, emotionally. The whole thing is meant to be hard-hitting or life-changing, and certain music really makes us conscious of our ability to feel, no matter who you are.