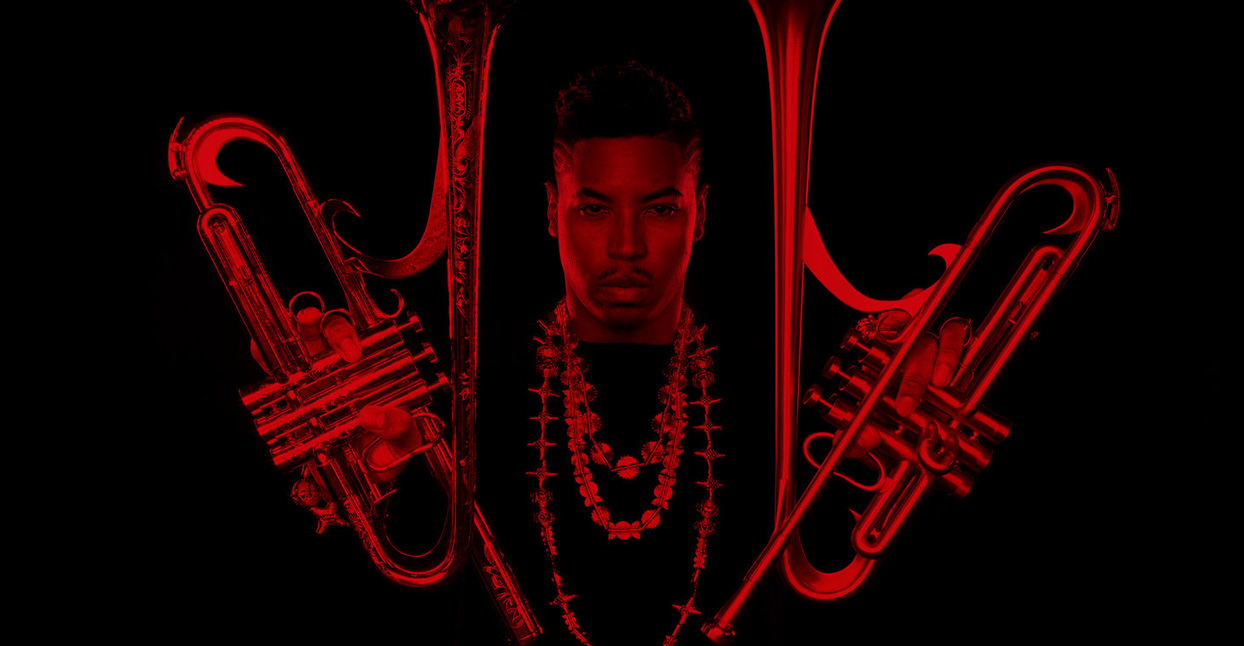 Jazz has been up front in the struggle for social justice since the early 20th century, when Louis Armstrong turned Fats Waller’s “(What Did I Do to Be So) Black and Blue” into a cry of pain. Nearly a century later, social issues remain a central force in the music—and once again, it’s led by a New Orleanian trumpeter. Christian Scott, aka Christian aTunde Adjuah, has spent his career addressing the issues that matter to him. It’s been known to cost him a gig, but he’s held fast to his principles.

Scott is a careful student of jazz history, and of its ability to absorb other musical traditions without losing its own identity. That history and adaptability form the core of his new project, The Centenary Trilogy. It’s a collection of three new CDs that mark the 100th anniversary of the first jazz recordings, made in 1917, and, as he explains, assess how the musical and political world has changed—and how it hasn’t—in the years since.

We spoke to Scott about the context of the Centenary Trilogy, its musical makeup and how Scott’s work has evolved to this point, and the tricky business of artists exploring social issues without making propaganda.

Let’s talk about Ruler Rebel—or, I guess, the whole Centenary Trilogy. Are you planning to package all three together in the end, is that the idea?

These are three separate albums, even though they all collectively form the trilogy. But yes, you should ultimately be able to get them all together.

The first one—out on the 31st of March, which is my birthday—is Ruler Rebel, which identifies who you’re listening to. We’re pulling from West African rhythms, rhythms coming from Zambia, Senegal, Mali, Ghana. And we’re affixing them with rhythms that come out of that experience, like trap music. I wanted to try and create a place that shows the compatibility of those rhythms. That’s also coupled with rhythms of the Black Indian culture of New Orleans, which is the culture I grew up in.

So that identifies who you’re listening to; the second is called Diaspora, which identifies who is being spoken to. It’s born out of the idea that all perspectives—no matter what culture you come from, no matter what your sexual preference is, what your identity politics are—are equally valid. So you have things like Nordic pop music, mixed with traditional Japanese music, mixed with music from Mali, mixed with rhythmic things from French Guyana, mixed with Delta blues! So it’s very wide-ranging, and the template is about mixing all of these elements, as a means of obliterating the limitations of genre and re-evaluating how we communicate with listeners.

The last one is called The Emancipation Procrastination. All the documents deal with social-political issues, but this one is a bit more heavy-handed: It covers the same ground as the first two CDs—but we go about the business of improvising for longer; there’s more interplay between the instruments; the context is vetted out a little more heavily. So it’s more—it isn’t exclusively jazz, but it’s more inherently jazz. It deals with the social-political elements that are in place 100 years after the first jazz recordings were made, and finds that many of the same systemic issues are still plaguing our existence.

Let’s talk more about the sound of the record. Who do you work with on Ruler Rebel?

We have Elena Pinderhughes, who is the only other soloist: She’s a flautist. We introduced her on the previous record, Stretch Music, and she’s grown leaps and bounds and sounds amazing on all of these documents.

I use a drummer named Weedle Bramah, who is the heir apparent to a lot of drumming traditions, really, from West African to New Orleanian, and creates a bridge between all these languages. So I use him on djembe, bata, and congas. And then Shaka Shaka, who is a chieftain here in New Orleans, who plays dununba, sangban, and kenikeni. They were coupled with the drummers from the Stretch Music recording, Corey Fonville and Joe Dyson. So there’s a lot of layers of drumming!

You also had Luques Curtis, and Kris Funn also, on bass. Those guys have switched back and forth in my band for a better part of a decade. And then you also have Josh Crumbly on bass, and Lawrence Fields on piano—Lawrence is a guy that I compose with from time to time.

Your trumpet playing feels very spontaneous on Ruler Rebel. Are you playing written compositions here, or is it all improvised?

Well, I wanted to try something new. So the way 95 percent of the music in jazz goes is, melody in, solos, melody out. When you do this every day, all year long, for twenty-some-odd years, that as a trope begins to become inert. I also harken back to the first jazz recordings at the turn of the last century, and a lot of what was happening at that moment was collective improvisation, and counter-harmony coming in on instruments other than the lead.

So I wanted to play with this idea—moving the melodies to other instruments, but make it very difficult for you to say at one odd moment which instrument is the lead voice. For you not to be able to get an idea of the melody just from what the trumpet was doing. These other instruments seemingly are accompaniment, but in a lot of moments carry the melodic content. Add to this the complexity of the rhythms, and that means that the melody and harmony and rhythm become something close to equal.

Great attention goes into atmosphere on this record. That’s been true since at least Yesterday You Said Tomorrow in 2011, but it feels especially true on Ruler Rebel.

Yeah, the production acumen pulls from something that you might call a Kanye West-ian style, or maybe Pharrell Williams, Timbaland—that kind of sound. This is something that I really love to do and have done for other artists, I’ve just never done it with my own art. So the production environment on these is different than any of my other work: The trumpet, or the flute, gets the same weight as the 808 or the 909, or the SPD-SX pads.

I think they hold different power. Obviously when you bring spoken word in, it creates a more literal experience than someone creating through a saxophone. But the emotive power that you can conjure in the instrumental moments I think is equally captivating—I think it’s just a different type of experience.

This is only a relevant question because the notes for these releases evoke such specific issues: climate change, food insecurity, the prison-industrial complex.

I think instrumental music has the ability to communicate anything that can be communicated. You’d be shocked at the number of musicians that go through food insecurity, or homelessness, or the like; what they have is the ability to channel what that felt like in the moment, and communicate that instrumentally. Obviously it’s different from saying in language, “Hey, I’ve been homeless before, I’ve been hungry…” but the instrumental music has the power to pull that exact same communication out of a musician in a much more powerful, palpable way than you can get to with the spoken word, actually. Being able to hear the anxiety, the melancholy, the triumph of getting past those things, I think is clearer.

But of course that’s one reason why we are coupling the instrumental and vocal music: so that there is, in some places, less ambiguity, more literalism.

Anxiety and melancholy have been a key ingredient to much of your music, over several projects now. Are they primarily what you want to communicate about food insecurity, or the prison-industrial complex?

No, not at all. You can be dealing with something very dark and traumatic, and still find some of the most joyous moments within those moments as well.

But I’ve also never believed that my particular view of a situation is a paramount one. You know, I’m an identical twin, and what that’s meant is that my brother Kyle and I have often seen things happen from within the same context and even from the same perspective, and yet we’ve come away with exact opposite interpretations of what actually happened!

So I never want to broadcast one sentiment, or one type of sentiment, within a composition. It’s not very dynamic—and life just doesn’t work that way. But this is also part of the reason why, in this form of music, it’s important to engage with and vet out other perspectives.

Does that mean that there aren’t particular messages that you want listeners, or readers of this interview, to take away from your work?

There are multiple things here. I think it’s important to be clear about where you stand on any given issue at any given moment. Obviously I am a fan of being clear and open. But with this music, I don’t think that it’s my job to tell people what they should feel about an issue. Obviously in my personal life I have those opinions, and they’re very strong, but they’re also constantly evolving and being re-evaluated; I can’t try to superimpose that on people and force-feed them that through my art. I do want them to engage their own minds about the subject. I think creating a moment or a musical reality that fosters thought, or a questioning of situations, is more important than “this is right or wrong, and this is the way we should or should not go.”

I am a person who believes that all people have validity, regardless of who they are and what they believe; they are valid because they are valid. So what we try to do is create a musical environment that respects their differences, affirms that validity, but seeks out the samenesses as a means of creating a more dynamic future.