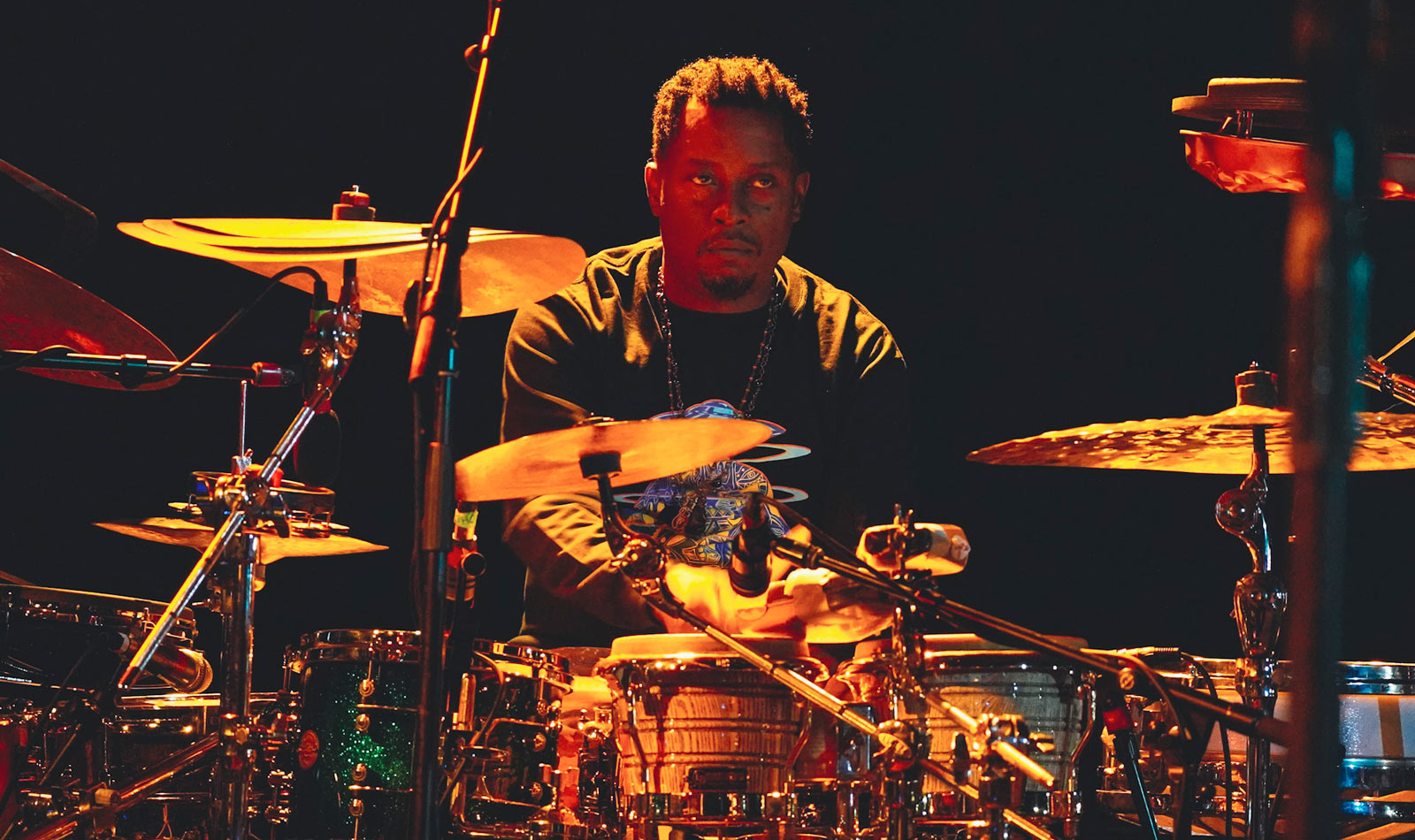 There’s a good chance you’ve heard Chris Dave play drums, even if you didn’t know it was him. Over the last 20 years, the Houston-born percussionist, bandleader, and producer has played with some of the most revered names in jazz and R&B, offering his unique drumming style to songs by D’Angelo, Justin Bieber, The Robert Glasper Experiment, and Adele. That he’s ascended to such heights is somewhat curious; Dave himself is quiet and reserved, not one to revel in applause. “He doesn’t like attention and he doesn’t like the spotlight to be on him,” says pianist and frequent Dave collaborator Daniel Crawford. The Roots’s bandleader Ahmir “?uestlove” Thompson once called Dave “the most dangerous drummer alive,” a characterization that Dave playfully dismisses. “I don’t believe that at all,” he deadpanned during a recent interview. Maybe that’s why he endures: He lets the work speak for itself. And his music is so resonant that it does just that.

Dave certainly has a sound: He uses stops, starts, and brief moments of silence as a way to determine his next move. It’s unclear if this technique is improvised or premeditated, but this creation of space lets the music—and the listener—breathe a bit after one of his customary drum fills. His kit is a sight to behold: To his right is an ornate spiral cymbal; to his left, or in front, is another cymbal, bent to the point of almost breaking in half. His drums sound big, like an 808 in acoustic form. Though the tone screams hip-hop and funk, Dave has a jazz sensibility, making him one of the most versatile artists in music. He’s equally measured when he speaks. During our interview, he sat in what appeared to be his living room holding a large drum cymbal, perhaps to feel more comfortable talking to a reporter he didn’t know. Given his love of percussion, it’s not unreasonable to assume he’s always near the drums; it’s his way of keeping sharp.

Over the last year, Dave has quietly uploaded six albums to Bandcamp. Compared with the kitchen sink aesthetic of his Grammy-nominated 2018 LP, Chris Dave and The Drumhedz, a distillation of rock, cosmic soul, rap, and Quiet Storm R&B, these are leaner selections of Southern soul and atmospheric break beats, possibly foreshadowing where Dave is headed next. “These are more like little coasters before the next Drumhedz album,” he says. “There’s so much stuff we’ve done over the years, I was like, ‘Let me tighten up a few of these and release them, so they won’t get stagnant and people can hear where we are mentally.” The music for Smoke Break, Cuffin Season, the Thine people series, and UNEVEN was recorded after the Drumhedz album, which was released by the vaunted jazz label Blue Note Records. Dave is no longer with the label; the new music represents a freedom he couldn’t exercise before. “These are different projects that I couldn’t do with them at the time,” Dave says. “Now I can finish this idea or that idea. A Drumhedz album wouldn’t be like Cuffin Season.” It speaks to the legacy he wants to leave as an artist: “All types of music are cool. There’s no limits, no boundaries.”

Dave took an interest in drumming because he was fascinated with rhythm. “I was beating on my leg, then at some point, I started playing on pots and pans, lunch kits, and building my own drum set,” Dave says. In church, he went from bongos to eventually playing the drums: “That was the initial start of playing with people.” He now looks back at church with a smile, and is a fan of an Instagram account that features cry-laugh-inducing videos in which pastors and preachers are gently mocked with funny voiceovers and blooper reels. You get the references if you grew up in a Black Baptist church. If you didn’t, it’s an education on what really goes down during service. “In college, I’d have all those stories and people would think I was lying,” Dave says with a grin. “I’d be like, ‘You never knew about tambourine man? You’ve never seen a drummer do a fill and just fall off the drum set, down the pulpit?” As a child, Dave absorbed all of this—the LOLs, the good word and the rapturous gospel—and used it as the base for his own musical blend.

At home, he listened to everything from Bob Marley and Funkadelic to funk bands like Brick and Con Funk Shun, and would try to replicate what he heard. His father listened to jazz, and played with respected musicians in Houston; his mother sang in the church choir. “It was a gumbo of music all the time when I would go home,” he says. “I was still playing at church, but I was trying to learn these jazz songs with my dad. It was a plethora of sounds, you know?” In middle school, he started playing for church choirs. Then, he went to the city’s Kinder High School for the Performing and Visual Arts where, among other topics, he studied esoteric beats from faraway places like India and Japan. After graduation, he went to Howard University on a full scholarship, but left after a year and a half, when the opportunity of a lifetime arose.

The R&B band Mint Condition had embarked on a college tour with the producers Jimmy Jam and Terry Lewis. The show came to Howard, and Dave cut class to see it. After the show, he went up to Jam and Lewis and suggested they sign his band. “But we didn’t really have a band,” he recalls with a laugh. The producers wanted to hear Dave’s band right then and there, so they went to a practice room on campus and started jamming. After 10 minutes, Jam and Lewis asked for Dave’s telephone number. He gave them the number to where he was staying at the time—not to his home in Houston. “This was right before Christmas break,” Dave says, “and I didn’t think they were gonna call me.” But they were trying to reach him, and when they finally did, they asked him to fly to Minnesota to audition for Mint Condition’s vacant drummer position. After playing with the band for three days, they asked him to join full-time. The first gig was on The Arsenio Hall Show. Soon enough, Mint Condition was opening for Janet Jackson on tour. Dave quit school and never went back.

His gig with Mint Condition led to bigger things; before long, he became a known quantity in gospel music. During a period of time when he was living with Mint Condition’s lead singer Stokely Williams, he learned how to make electronic beats with off-kilter drum patterns, like famed Detroit producer James “J Dilla” Yancey. Therein lies the foundation of Chris Dave as we know him today: the funk, jazz and gospel-trained percussionist and composer with a knack for unconventional cadences and tempos. He flexed this skill the most as a member of the Robert Glasper Experiment, the alternative soul and jazz outfit fashioned after the legendary pianist Herbie Hancock’s early ‘70s period.

Dave and Glasper had known each other since high school, and crossed paths during a show in New York. Glasper had extra space in the apartment he was co-renting and offered it to Dave, who had been in the city quite often. “I’m thinking it was gonna be a couple of weeks,” he remembers, “but I ended up staying there maybe four or five years.” The basis of the Experiment was formed in that space, on a drum set, bass, and Rhodes that was set up there. The group made their debut on the second half of Glasper’s 2009 album, Double-Booked. Of the songs Dave wrote, the concluding track “Open Mind”—with its prevalent chant and dynamic mid-song drum solo—was (and still is) one of the most vibrant in the group’s discography. Even as the Experiment released a trio of critically-acclaimed and Grammy Award-winning work, Dave was quietly assembling the beginnings of the Drumhedz, a roaming collective of like-minded musicians who also wanted to bend genres.

Dave, bassist Pino Palladino, and pianist James Poyser booked a performance in London that quickly sold out. They started playing festivals under the name Chris Dave and Friends; in 2013, the bandleader released his debut project, Chris Dave and the Drumhedz Mixtape, a 23-track collection of old and new studio and live recordings that paved the way for the group’s official studio LP, a grand effort that felt like an open-mic and featured everyone from singers Anderson .Paak and Bilal, to rappers Elzhi and Phonte. It was nominated for the Best Urban Contemporary Album Grammy in 2018. The record flew under the radar of many critics and fans, and still sort of hovers in the underground, despite the nomination. Perhaps it didn’t jibe with Blue Note because it wasn’t jazz in the contemporary sense. Swing rhythms were met with spacey clatter; drum brushes were played during night-themed slow jams. And though Dave’s name appeared first on the album jacket, he often played background to his co-stars, refusing to put the drums front and center. Instead, the album felt like collaborative work from a united front. “Everything there was something I would listen to if I wasn’t playing,” Dave says. “I just wanted it to feature the concept of what we were all trying to do as a group.” Dave says he’s working on a new Drumhedz album, and it will have the same creative free spirit as the work preceding it.

More than anything, Dave wants listeners to view his music without the lens of genre, and to view it as sonic art. That you can place his albums pretty much anywhere in the record store is a plus. “It’s just another way to challenge yourself,” Dave says. “You’re going back and forth with this audio dance. I’m trying to finish stuff in my head to get to your ear, but your ear is like, ‘Will I accept it? Am I understanding this? Does this make any sense?’” The dance is understandable, as long as it elicits some kind of emotion: “If you feel anything from this, that’s a positive.”