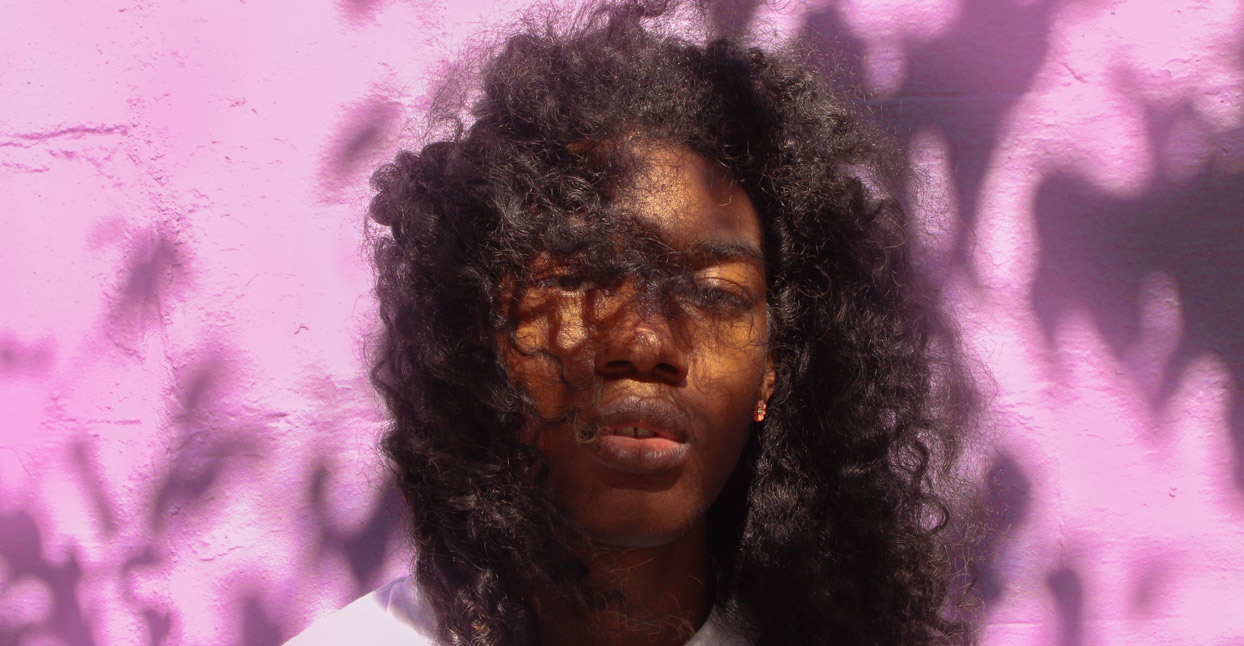 There’s a kind of internal tug-of-war that takes place any time a listener discovers a new musician. They want the artists to succeed financially, sure, but only if they can remain our little secret. That struggle will doubtlessly go down the minute people start discovering Choker, an emerging 21-year-old jack-of-all-trades whose debut album, PEAK, is a deep dive into his brilliant mind.

Like other artists from Detroit, Choker’s music bears the influence of J Dilla and Slum Village, while opener “Mango (Mountain Version)” evokes shades of Frank Ocean. The beats are hazy and drowsy, and the lyrics reflect Choker’s vulnerability—he sings and raps about self-doubt and falling in and out of love. “I’m never stagnant emotionally,” he says. “So whenever I’m making music, it’s going to reflect how I feel at that moment.”

Though he is quiet and reserved, Choker’s talent is impossible to deny. He’s mellow, but excited when the topic turns to the possibility of people discovering his music. Consider this interview an introduction; he won’t need one for long.

What’s the first instrument you picked up?

Piano. I started out trying to make beats on FL Studio first, and with that, of course the easiest thing to use is a MIDI keyboard. So I got one of those, and was just playing around, trying to figure out chords and stuff like that. And from there I was like, ‘Oh, I wanna try out guitar,’ so I learned guitar and just went from there.

How did growing up in Detroit shape you as a person?

I’d say it toughened me up. It made me a lot more wary of people around me. I don’t think I’m a really open person in general when it comes to most things. I’m not quick to be buddy-buddy with people. So it made me more aware of my surroundings at all times. I think growing up in Detroit is why I appreciate music so much, because I was raised around so much good music and good art.

Which Detroit artists have shaped your music?

Danny Brown, for sure. He’s killin’ it. I listened to him early on in high school and thought, ‘Holy shit, this is insane. This doesn’t sound anything like anything else.’ It’s really easy to fall into pre-made categories of music, and he just did his own thing. J Dilla, for sure. And I remember listening to Elzhi really early, and he made me want to get into rapping. He did a mixtape where he just rapped over a bunch of Nas beats [Elmatic]—just killing Nas tracks. He was one of the early local rappers that made me think, ‘Oh, he’s doing it, and I could possibly do something like that, too.’

It’s funny you mention Danny Brown not being able to be defined by one genre, because that’s what your music is. There’s no singular sound through any song on PEAK.

When did the singing come into your repertoire?

My mom used to sing, so I’d just sing along [with her], I guess. Then I started thinking maybe I could sing on tracks—it’s a little more expressive than rapping. Especially with my tone of voice, when I’m rapping, it’s pretty monotone or low-key. But when I’m singing, I express the feelings I’m trying to get across better.

What’s an album from before the year you were born [1995] that influenced your overall music taste?

Innervisions by Stevie Wonder. Or a whole bunch of assorted reggae and dancehall music, because my mom is from Jamaica. Peter Tosh, Beenie Man, artists like that.

Who are some of your favorite filmmakers?

Spike Jonze, he’s awesome. Her is one of my favorite movies all-time. He also has this really short film he put up on YouTube [called I’m Here]. It’s about this little robot couple and it’s really well-shot. It’s dope as hell. Wes Anderson, too. He’s awesome.

Spike Jonze has a ton of influence in the music world directing videos, too.

Yeah, wasn’t he the one who directed that Pharcyde video [‘Drop‘] that was shot backwards? That shit blew my mind as a kid watching that. I was like, ‘What? How did he do this? How did he reverse this while still having them mouth the words and shit?’

I ask because listening to PEAK, your album plays out like a movie. There’s a whole range of emotions that you express in such a short time. Did you have a general story arc for your album? Or did the tracklist just create the story?

I think it just came out naturally. It’s a natural progression either of things that happened to me, or things that’ve happened to people I know. It’s just compiling those things and presenting them in a more concise manner.

The album starts with ‘Mango,’ and it sounds like you’re unsure about a relationship. And by the end of the album, you sound even more confused about the situation you’re in. But there is an emotional climax in the middle of the album.

That’s just life, man. I have no idea what’s going on like, ever. That’s just how life is. It’s just a whole bunch of things happening, you experience them, and you say, ‘Oh, wow, that was tight.’ Then you try to break down how that happened, or how you felt about it. I only have my point of view, that’s all you have in your life. Your specific point of view, how you see things through your eyes, how things happen, how you react to them, how they affect you personally.

It seems like with whatever beat starts a song on PEAK, it’s never the same beat at the end of the song. Is that intentional, or is that more a parallel to the range of emotions that appear throughout the record?

I think that’s just ADD, honestly. It does have to do with emotions being unstable, but it also has something to do with my own personal emotions being unstable. If I’m making something, I’ll love it for five minutes, but then I won’t like it anymore and I’ll try to make something else. I won’t even open another project file. I’ll just try to make something else out of what I’ve already made. Five hours later, I have a whole track at four minutes and it’s just a whole bunch of different things happening, and I look back and they still go together because I used similar sounds and drum patterns. Then after a while, I have hundreds of those songs, and I just put ‘em together and I have an album.

Close your eyes and tell me what you were thinking about when you made ‘Diorama.’

It starts out when you’re in the shower, getting ready for this party, and you’re thinking about a past relationship. You want to escape that shit, like, ‘Oh, I’m just gonna go out with the homies tonight and experience life a little bit, try to get past this and put my mind on something else.’ So you go out to this party, you meet a girl, she’s awesome. You’re ready to throw all of your emotions at her and just live in this moment a little bit. It’s very selfish. You’re meeting this person, but you’re not really thinking about things they’ve gone through, or their intentions. You’re talking to this girl, and you’re finding out the not-so-nice things about her life, but you’re still cool with that. A whole lot of this album could just be explained as an explosion of emotions. It’s super-heightened emotions that reach a fever pitch. Like, revealing anything you’ve ever felt, and cranking that to 11. I’m trying to capture that.

The second half of ‘Diorama’ is euphoric.

It’s like you’ve accepted this person’s flaws for the moment, and maybe you’re not going to carry on with it for a long period of time. But for this very short moment, everything feels right. That’s where that moment of euphoria comes in, and the track ramps up with a really high, buzzy synth. That’s what I wanted to try and capture.

Are you a spiritual or religious person? A lot of your music revolves around trying to find a reason for what’s happening. You directly reference the Hindu idea of moksha in a song, too.

I’m not overtly religious, but I definitely believe there are things beyond humans. There are just so many things that are beyond our comprehension, so many things that we can’t put into words. For us to try and even explain why we’re here, or how we’re here—it just wouldn’t make any sense for me, personally, to chalk it up to it’s just ‘a giant dude in the sky,’ but I do feel like there’s something. I’m not sure what, but there’s something.

‘Lush’ is obviously the resolution of the album, but at the very end of the song, there’s a sense of energy and hope. Even though these emotions played out until they reach a fever pitch, and even though they didn’t play out like you wanted them to, will that sense of hope carry into the next album?

Everything I’ve made—starting with PEAK and from this point on—it’s all one big rollercoaster ride of things happening to me. So, yeah, I guess it could carry over, and the next thing I make, [the hope] could go down again.

I always work on a billion things at once. I’d like to read more, but instead of reading or playing video games, I’m just working on music. I was working on PEAK for a long time, and while I was working on it, I had three other projects I was working on. Potentially, all three of those could not see the light of day, but, it’s just how I choose to spend my time.

Do you have an overall goal for your music?

Connecting with people. Making people feel better about themselves. Making people feel heard. When you hear someone say something and you can relate to it, or so you see someone doing something and they look like you or they talk like you, it will make you think, ‘I can do the same exact thing,’ or, ‘I can feel comfortable in my skin for this moment because this other person feels comfortable enough to let these emotions go.’