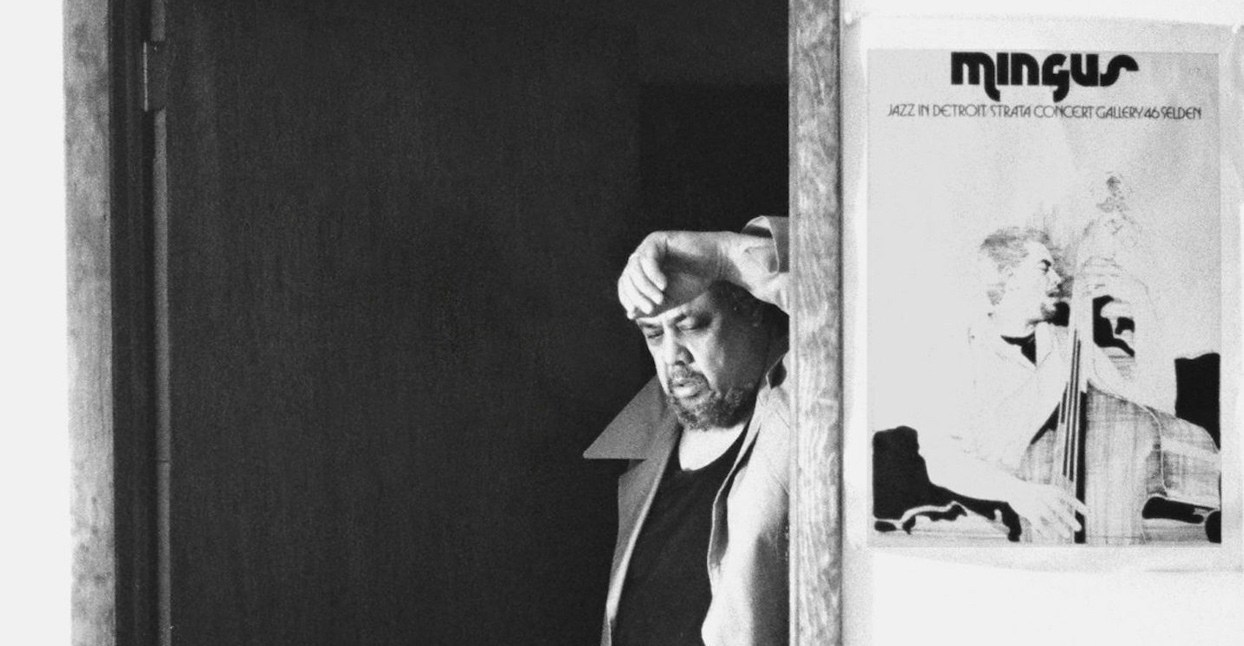 Several years ago, Amir Abdullah—better known as DJ Amir, half of the Brooklyn DJ/crate-digger duo Kon & Amir—was in Detroit researching the city’s short-lived but legendary Strata Records label. (Abdullah, in 2011, founded his own label, 180 Proof Records, specifically to license and reissue the Strata catalog.) Among the papers of poet John Sinclair, who worked as Strata’s publicist until its demise in 1975, he found a flyer from February 1973.

“MINGUS,” the flyer read. “Jazz in Detroit/Strata Concert Gallery/46 Selden, Feb. 13-18. Broadcast Live on WDET-FM 101.9/Feb. 13/10:00 PM.” There was no other information about the concert, and certainly no recording. Like so much of Strata’s history, Abdullah assumed that the concerts were lost forever.

Then, in the summer of 2017, Abdullah received an email from Barbara Cox, the widow of Kenny Cox, who founded Strata Records in 1970. (Cox died in 2008.) Her friend Hermine Brooks, the widow of Detroit drummer Roy Brooks (who died in 2005), had tapes of the Mingus band at Strata Concert Gallery. “I’m just yelling at the computer, like, ‘Yes! Oh my God! Are you serious?’” Abdullah recalls. “I was just blown away.”

Here captured at soundboard quality, this quintet was otherwise undocumented, filling a gap in Mingusology that few even knew existed. “Those people are no longer around,” says Hermine Brooks, who stored the recording in her basement, unheard, for nearly 45 years. “Those brothers that were on that tape, I just want them to be heard.”

The concert, and those on the five nights that followed, took place at the Strata Concert Gallery: a small downtown commercial building shared with the record company’s offices at 46 Selden Street. The gallery space could only fit a small audience; what’s more, even at $4-$5 apiece, tickets were out of reach for much of the African American community in the impoverished, blighted Detroit still standing after the 1967-68 riots.

But Kenny Cox, a jazz pianist himself, had started Strata as a means of connecting the music to the people. “Detroit was going through so many changes,” says Abdullah. “This was important to Kenny and Strata: to give the community not just culture and enjoyment but hope.” To that end, he made the broadcast arrangements with WDET, a public radio station licensed to Wayne State University. If some jazz lovers couldn’t make it out to the music, the music would make it out to them.

There was no paperwork, no formal broadcasting agreement. Everything was done on a handshake. A populist and convenient arrangement, it was also a messy one. Engineer WDET Phil Mendelson set up the live broadcast (and the recording, made solely as a backup) to feed directly from Strata Gallery’s soundboard, resulting in fairly good quality but also in significant feedback and sonic distortion, particularly on Pullen’s piano. “It was a live recording, and it’s not like they were recording at Carnegie Hall, where you’re going to have the best equipment and best mics for recording,” Abdullah says. “It’s all DIY.”

Jazz in Detroit bears out this observation. When DJ Bud Spangler talks through the intermission, Mingus briefly interjects to note the lack of stage monitors. “You need a guitar amplifier then, for a backup speaker,” Spangler says. “If anybody wants to bring a nice guitar amplifier down to the Strata Concert Gallery, we’ll let you in free, how’s that?”

(A moment later, Spangler notes his own technical deficiency: “In case you’re wondering if anything’s wrong with your set, I’m only on … the left channel because we ran out of mic patches.” Incidentally, on the released recording, Spangler is in the right channel.)

After the show, Brooks—who along with his drum work gives Spangler a 20-plus-minute interview during intermission, talking about the state of jazz in general and in Detroit—simply asked for the recording. “Whoever did the recording, he knew them, so they just said, ‘Sure,’” says Hermine Brooks. “Roy always asked for everything. He was like that: He liked to document everything he was doing.”

After her husband’s death, Hermine understood the importance of keeping his recordings—but she never listened to them. Nor did her son, Raheem, although he took a few of them as a memento of his father. “We looked at it once or twice and said, ‘Oh, this is Mingus,’” Hermine says. “We didn’t have time to do anything with it or go anywhere with it. We just said, ‘OK, we’ll just keep it.’” Once she heard about Abdullah’s mission from her friend Barbara Cox, though, she knew she had to tell him what she had.

Abdullah and his engineers devoted hundreds of hours to the Mingus concert’s five reel-to-reel tapes. (He also obtained the legitimate legal permissions and licensing; no handshake agreements.) There was nothing to be done about the microphone distortion—but Abdullah considers that a feature, not a bug. “It adds to the ambience of the recording itself,” he says. “You really feel like you’re in the audience. You can hear that distortion, you can hear people smacking gum and talking. I think that’s awesome.”

Abdullah and 180 Proof, then, have unearthed an important document…and he says there’s more. “The show after Mingus was Herbie Hancock, and that was basically the Headhunters and it really sounds awesome. And there’s some other things in the catalog. They did a gospel record on Strata, which I still have to figure out how I’m going to piece it together, because it doesn’t have any song titles. There’s some more Latin stuff on the label as well. I want to get at the concerts for Ornette Coleman and Elvin Jones and Keith Jarrett and Chick Corea and Weather Report. There’s plenty in the catalog still to come.”