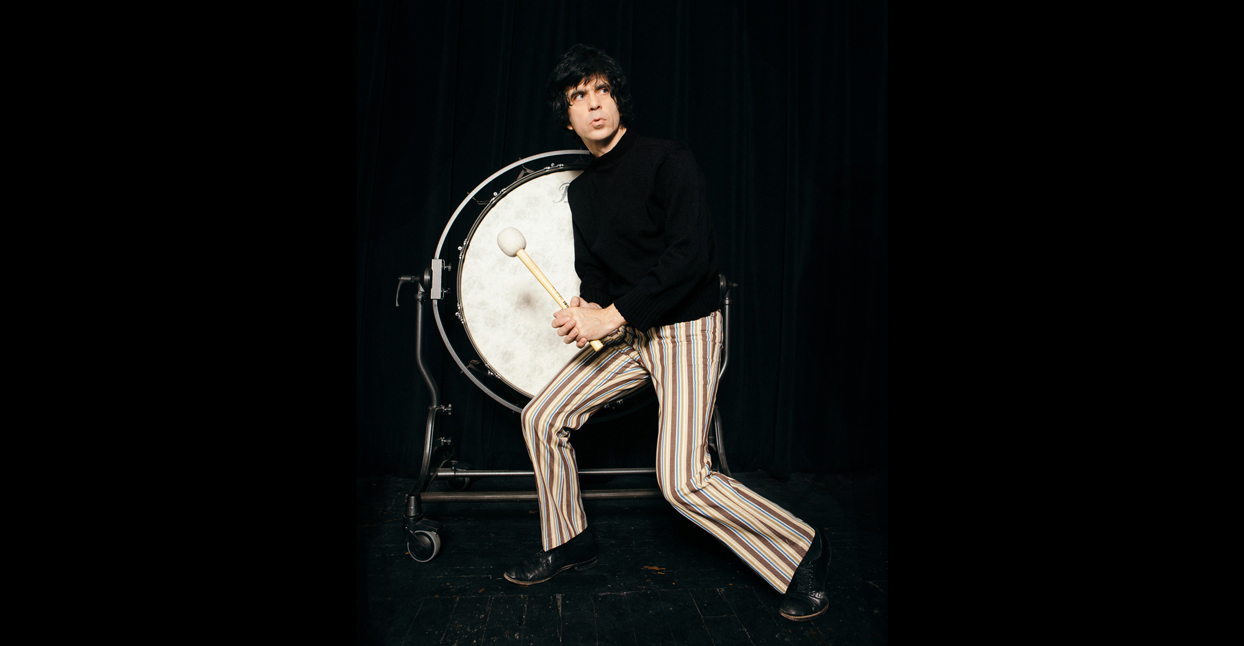 “I’m the type of person who when I’m on the phone, I have to do something else. I usually sweep.”

Ian Svenonius is causing a racket over the phone, shuffling about and rummaging through cupboards in his residence in D.C. while he speaks about Experimental Music, his new record with his rock ‘n’ roll outfit Chain and the Gang. Svenonius is an icon in his own right, from his critical Dischord years with Nation of Ulysses to gospel yeh-yeh project Make-Up to authoring several beloved, bizarre books. But he’s as sincere as he is affable and accessible. Liam Gallagher mourned about having to make himself a cup of tea; Svenonius is gushing about sweeping his apartment. A true champion of the people.

Like all Svenonius projects, Experimental Music has a message. The name itself is hilariously dissonant; the titular opening track is a bright California wash of beachy guitars and Svenonius doing his best ‘50s boy band doofus imitation: “Experimental music made me feel so free! Walking down the beach with my baby!” he jeers. It’s a gloriously indulgent paradox: calling on an esoteric, anti-capitalist genre in the most obnoxiously formalist surroundings. The record is a delightful celebration and interrogation of both.

Svenonius chuckles, excited with the contrast. “It’s our attempt to delve into the world of experimental music,” he says. “Why let John Cage have all the fun?”

The duality that Svenonius toys with runs deeper than aesthetic differences (although aesthetics are of paramount importance in his work). He’s a vocal critic of the dissolution of the underground, and the spotlight that’s been shone on subversive communities. “The whole idea of underground music has always been a response or reaction to some kind of overground,” Svenonius reasons. “There’s an identity crisis going on, where a lot of people in underground music now just identify with pop stars.” He’s not scathing or repulsed, but longing for the curiosity and criticism that came from having a divide between the two cultures. “There was this conversation going on between underground and overground culture,” he says. “There’s no longer these trenches dug with people facing off and lobbing back and forth.”

Svenonius is an advocate for the underground, but as the margins have widened, he’s had to make concessions on his own ideology. “At this point, you have to decide which decisions are just totally quixotic, and which are just self-defeating,” he explains. “Let’s face it: most gestures are largely aesthetic and symbolic.” That isn’t necessarily a slur; in fact, Svenonius has engaged with and troubled the roles of symbolic and aesthetic signifiers throughout his career, acknowledging their emptiness while employing them to cultivate an identity.

“Art is a gesture, an extreme gesture,” he says simply. “But to confuse that with politics, it just doesn’t work unless you’re really gonna go all the way.” Svenonius has gone about as far as you can go as a frontman in a band. A broken limb was just another day on the job at Nation of Ulysses’ unhinged live performances. He’s naturally suspicious of artists that employ the rhetoric and aesthetics of protest and political activism without concrete action. “When rock ‘n’ roll was determined to be activism, then you really lost a strain of activism that was coherent, because rock ‘n’ roll is, by its nature, incoherent. It really made activism infantile, reactionary, and just incapable of anything. Folk music was always tied to political protest, but it didn’t replace political protest.”

“There can be powerful music that isn’t moronic,” he continues. He laments his country’s disdain for measured, progressive discourse. Because they’ve been pathologized as condescending and elitist, legitimate intellect and logic have been shunned. “The problem in America is that we’re so anti-intellectual and we hate pretension. As soon as somebody starts talking coherently, we take away the mic, ’cause, ‘Oh, it’s a nerd.’ That’s a real tendency.” With Experimental Music, Svenonius toys with that knee-jerk reaction, by packaging anti-capitalist sentiments in breezy, palatable pop music.

The frontman’s points are chambered and complex, and rarely solidified. He’s a believer in the power of artistic rhetoric; he’s just skeptical of its long-term efficacy and legitimacy. “Saying ‘rise above’ is really different than political engagement and theory, [but] you can’t underestimate the effect of art,” he notes. “That’s why totalitarian states always censor their art.” He’s equally blunt assessing the damage wrought by punk ideologies. “You see it in Trump, who is just totally punk, and the alt-right, which really reminds me of Your Flesh from the early ‘90s. The aesthetic around a lot of Midwest punk is very similar to what’s called the alt-right.” Svenonius has spent the majority of his career operating in and around punk subcultures, but still needles his own space, driving discourse further. “I am a symbol of everything that’s wrong,” he says, without a hint of irony. “I can’t judge anybody for being the way they are, because I’m the worst offender.”

Experimental Music is predictably full of that two-tone discourse, cheekily paired with bare-bones rock music. “Rome,” a riotous stomp promoting the long-game of dismantling a corrupt regime, is simple and brutish. “Logic Of Night” prods why certain behaviors are socially acceptable at nighttime over skulking Link Wray tremolo. It’s sometimes hard to decipher whether Svenonius’s Kubrickian banality is satirical or genuine, and one guesses that it could be either, depending on which day you speak to him. That’s part of the magic, and Svenonius wants to keep it alive.

But that’s hard to do in an era where each micro-moment is documented and disseminated for profit. “Without mystery and myth, I don’t know if there can be any happiness,” he says earnestly. “[Mystery] is a big part of pleasure, and now there can be no mystery to anything.” Svenonius says the excess of stimuli is ruining more than we think. “The music industry is 20% playing music, and the rest of it is all this hype promotion bullshit. Events feel less vital, and I think that’s directly correlated to all this promotion hype because it’s dissipating energy. It’s taking the place of the actual event, which is supposed to be playing music.”

Svenonius is strangely at peace with, or perhaps just morbidly fascinated by, the trend. “As a music enthusiast, I really love the dark times of the American music industry,” he says. “Bubblegum music and exploitation music, all this music that was fostered by this scummy, sleazy, degenerate management class, and all these super exploitative record labels. What we’re seeing is a willful return to that era.” But he’s firm in his belief that the pendulum will swing back the other way.

“What you have to remember is there’s no stasis. Things aren’t static,” he says. “Even if there’s a trend or value system that you don’t love that’s prevalent, we’re the rock ‘n’ roll workforce, so we ultimately determine what the value system is.” He adds, chuckling, “Motley Crue didn’t last forever.”