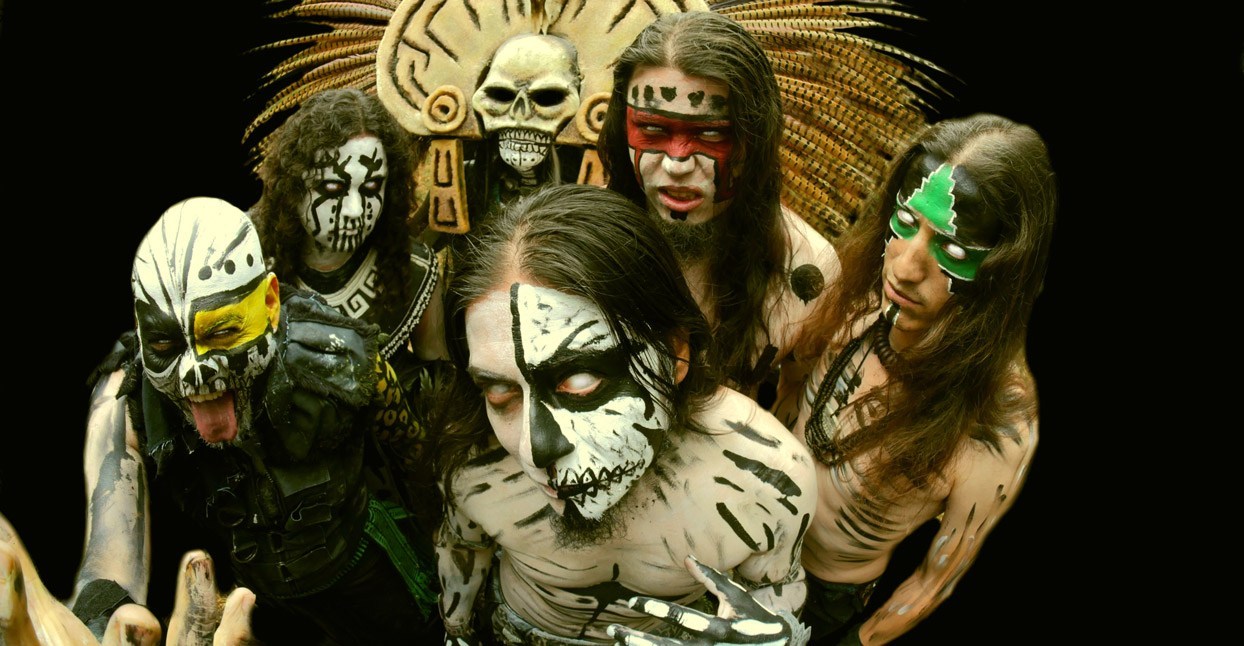 As long as there’s been rock music, indigenous people have been making it. The 2018 documentary Rumble: The Indians Who Rocked The World filled in a lot of gaps, telling the stories of legendary Delta bluesman Charley Patton (believed to have Choctaw ancestry) and guitarist Link Wray, among others. Canadian musicians from Northern Haze to Digawolf help to keep their communities and languages vibrant. In the world of punk and metal, artists have honored their indigenous heritage while also embracing modern forms of sonic aggression. Brazil’s Sepultura collaborated with musicians from their country’s Xavante tribe on 1996’s Roots. The grindcore band Resistant Culture have been blending native instrumentation and militant environmental concerns with furious thrash for close to 20 years, while California’s Black Twilight Circle is a tight-knit collective of underground metal acts who incorporate pre-Columbian languages, instruments, and themes into their music.

Mexico’s Cemican—the name means “the duality of life and death” in the indigenous Nahuatl language—was formed by vocalist/guitarist Tecuhtli and drummer Tlipoca in 2006. They quickly added players, most importantly Xaman-Ek, an expert in the Nahuatl language and culture who started out on bass, but eventually became their vocalist and something of an onstage shaman. Cemican take their interest in pre-Hispanic culture and Aztec mythology to a degree previously unseen in metal.

Their music incorporates traditional wind and percussion instruments not just as accents, but as core compositional elements. They also take the stage in face and body paint, and feather and bone headdresses and armor, that honor Aztec tradition. Of course, they’re a metal band, not a folkloric ensemble, so they push things to GWAR-ish extremes at times; for visual reference, there’s a YouTube video of Xaman-Ek, dressed like a black metal Aztec priest, “sacrificing” a victim onstage, holding his beating, blood-spurting heart up to the audience.

Although Cemican’s album titles and stage names are in Nahuatl, most of Cemican’s lyrics are growled in Spanish. “At the end of the day, Nahuatl is spoken by a small percentage of people, and only in the center of the country,” explains Raul Lucido of Metal Mexico, an organization that promotes Mexican metal bands internationally. “If you make an album fully in Nahuatl without knowing what people will understand, it will probably not have the same impact as if you put it in Spanish.”

“Every one of us has a different taste in metal,” says bassist Ocelotl, through a translator. “Xaman-Ek is a big fan of thrash and even punk, Tecuhtli is a fan of some types of death metal or black metal and symphonic metal as well, Tlipoca loves classic heavy metal and thrash metal… I am one of the newest members and the youngest, and I love new metal and classic metal as well.” He adds that “the two founders were very influenced by a guy named Jorge Reyes.” Reyes, an electronic musician who combined synthesizers with pre-Hispanic instruments and traditional/folkloric sounds, recorded many albums from the mid ’80s until his death in 2009, including collaborations with Steve Roach, and performed concerts at famous Mexican archeological sites.

Cemican’s latest release, In Ohtli Teoyohtica In Miquiztli (“the mystical path of the dead”), is their most polished effort to date. The opening track and first single, “Guerreros de Cemican,” begins with a blasting death metal riff and a quick, squiggly guitar solo, followed by the plaintive moan of a stone flute. (Onstage, a member named Mazatecpatl has a small table covered with various flutes, rattles, and even conch shells; it looks like the array of “little instruments” one might see at an Art Ensemble of Chicago performance.)

Tracks like “Ritual” blend a variety of wind instruments, including one that sounds a bit like a didgeridoo, with traditional percussion, group chants, and grinding bass and guitar solos. On “Luna Desmembrada” (“Dismembered Moon”), the flute melody has an almost Celtic folk quality, and a female guest handles lead vocals; the next track, “Atemaxaque,” is a ritualistic interlude played entirely on traditional instruments, with some eerie howls of torment deep in the background, as though we’re hearing victims being sacrificed to the ancient gods.

Though seven years have passed since Cemican’s second album, Ticateh Ipan Miquixtlahuac, they only began working on In Ohtli Teoyohtica In Miquiztli in 2016, having undergone several lineup changes in the interval. “We had ideas since forever for this album,” says Ocelotl. “Right now we’re thinking about the next record, and we already have new riffs and ideas. But for three years we were jamming and developing these songs, and working on the production.”

Combining ancient and modern instruments presents unexpected technical challenges. “Most of the pre-Hispanic instruments were specific to each song, because it’s very hard to find the correct notes on a hand-crafted instrument,” Ocelotl explains. “So sometimes they were out of tune and we had to find the exact flute that worked for those tones in that song.”

Cemican have been working hard to grow their audience outside Mexico, taking particular advantage of the European summer metal festival circuit and playing large gatherings like Wacken Open Air in Germany or Hellfest in France. “They’ve played more times in France than in Monterrey, the third largest city in Mexico,” says Lucido, with a laugh.

“Europe is well known for ancient cultures, like the Vikings or the Celts, and there’s Viking metal of course, but they are not familiar with the ancient cultures on this part of the globe,” says Ocelotl of European audiences. “So their first reaction is, ‘I’ve never seen this before.’ We see their faces and they’re like, ‘What the hell is going on?’ Everything is body paint and fire and feathers on the head—it’s a very unique show. After the first one or two songs they’re scared or amazed with their eyes and mouths wide open, but by the third or fourth song people start understanding and loving what’s going on on stage.”