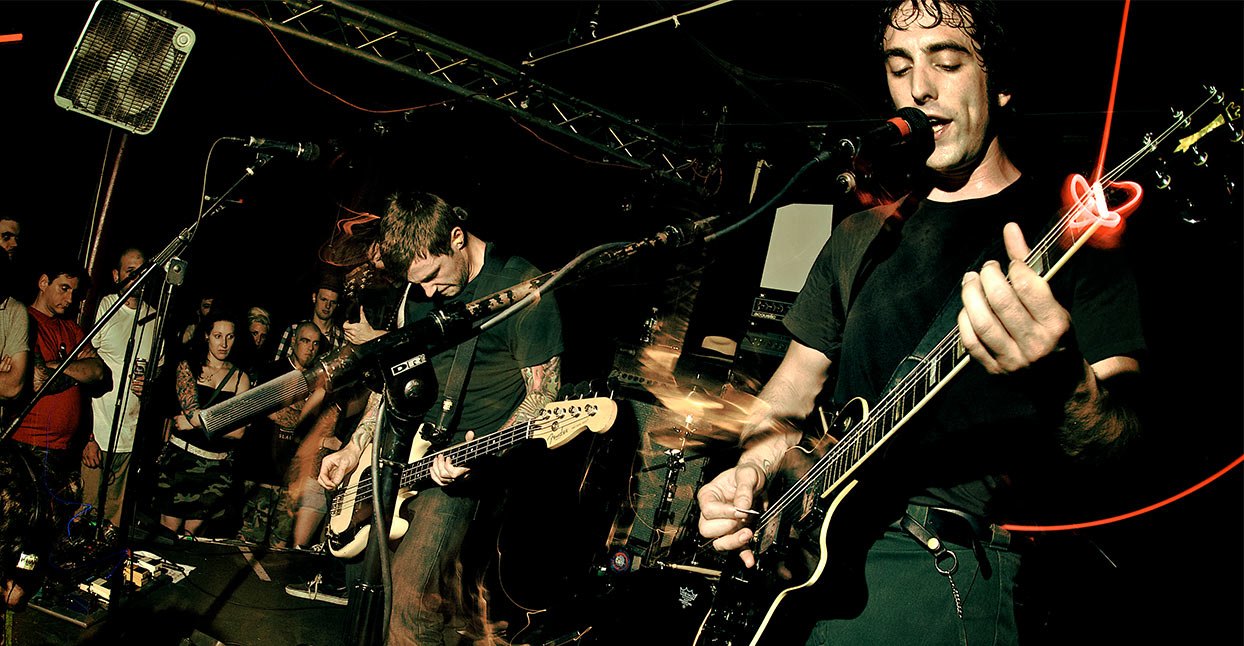 A brief history of the Eastern Massachusetts band Cave In reads as follows: they started hard, then got weird. On their 1998 debut Until Your Heart Stops, the group—vocalist/guitarist Stephen Brodsky, guitarist Adam McGrath, drummer John-Robert Conners, and bassist Caleb Scofield—introduced themselves as complicated hardcore band; by the aughts, they’d begun investigating “heavy, heavy space rock.” Jupiter, released in 2000, and the 2003 major-label-debut Antenna are metal only in the broadest definition of the term. Miraculously, the transition worked, and not only did their original fans follow, their audience grew.

Save for a brief three-year hiatus from 2006 to 2009, Cave In’s output has been steady. All the members indulged their individual proclivities in side projects, which ranged from abstract to crushing, but they always returned to tour and record within the familial home of Cave In.

In late 2017, the group convened again, jamming and recording skeletons of songs in anticipation of a new album. A few months later, on March 28th, 2018, Caleb Scofield—a member of Cave in since 1998—got behind the wheel of his pickup truck, and steered onto the Central New Hampshire Turnpike. Shortly before 1 p.m., the musician’s vehicle struck a concrete barrier at a toll booth, and burst into flames.

“He was like an older brother to us,” McGrath says. “I’ve lost my grandparents, but losing someone you think you’re just going to go straight through life with, someone who will always be there, the void is…the vacuum is… I’m still trying to figure it out.”

It’s no surprise, then, that Scofield’s absence hangs heavy over the band’s new album, Final Transmission. The first song begins with a simple phone memo recording by Scofield, accompanied by only an acoustic guitar, a sung “doo-doo-doo” intoning a simple melody—a nascent idea for a song, the last recording he’d make for Cave In. Without indulging too far into flights of existential sentiment, the rest of Final Transmission was completed by the three surviving members of Cave In as both tribute. and means of psychic self-preservation. The record is Scofield’s final testament, the work that remains on Earth, until everyone who might need it are gone themselves.

Compared to Cave In’s earlier work, Final Transmission is decidedly streamlined—that is, if a Polvo/Alice In Chains hybrid, interspersed with melancholy shimmer-noise, could be considered “streamlined.” Scofield’s playing, either on bass or guitar, is on every track, and the songs are largely the same songs that the band played together in a room in February of 2018. There was some overdubbing, some vocals recorded individually, and mixing by gifted heavy-sound whisperer Andrew Schneider. But what the listener hears on Final Transmission is the sound of a band staying faithful both to their late member’s intent, as well as the aesthetic journey the four have been travelling over the last decade.

Triple harmonies between Adam, Stephen and John-Robert—a first for the band— add a haunting classic rock vibe to the push-and-pull dirge beneath. The band laughs at the AiC comparison: Brodsky admits that every member owned a copy of Dirt when they were teenagers. As the latter points out, “Alice in Chains hit the suburbs of Massachusetts really hard.” It was Scofield who hummed the Cantrell indebted pre-chorus on “Strange Reflection” in McGrath’s ear, not even a little shy about who he wanted it to sound like.

For Cave in, the recording process was harrowing, but also healing: though their friend was no longer alive, the band had him in their ear at every step. “Part of the process of doing this record was a trip, but it was also being with my friend, hearing him in my headphones, seeing it through to the end,” says Brodsky. “Having Caleb in the headphones, three of us in a room, working through the grief…I’m really glad we did that.”

“There’s a tendency for people to shy away from events or situations that are too painful in this world,” adds McGrath. “For us, making this record was kind of taking it on the nose. But beyond that, I think the idea that this record was going to serve the family was a huge motivator, and it gave us strength.” (50% of all the proceeds from sales of Final Transmission will go to Scofield’s family; he leaves behind a wife, a daughter, and a son.)

Records with such heartbreaking backdrops generally attract widespread attention—often to an uncomfortable degree; it can be hard to gauge the difference between genuine interest and ambulance-chasing. But Final Transmission is not born of tragedy, that happened after most of the music was written and recorded; this LP was born from friendship. From the wall-of-sound cacophonic bliss of “Lunar Day” or the mournful stomp of “Shake My Blood,” Final Transmission is the sound of four brothers who love each other—and their art—enough to labor at unreasonable volumes in tiny sweat boxes, to travel the world in sweaty vans, and to spend decades entertaining each others bad jokes. Final Transmission, divorced from its background narrative, is a tremendous rock record.

When McGrath is pushed to say whether the band had, through either the record or the circumstances around it, found that new appreciation for our short time here that people are often expected to express in the face of trauma, he admitted that it at least gave him the impetus to quit a job he hated, but refused to settle for feel-good bromide.

“Oh my god, I can’t… believe he’s gone. It has woken me up to a lot of things, what I’m trying to get out of life,” he says. “I quit a job I fucking hated. Music is what I love. I know that. Getting older, I know plenty of people who don’t know what they love. I’m just going to go with this.”