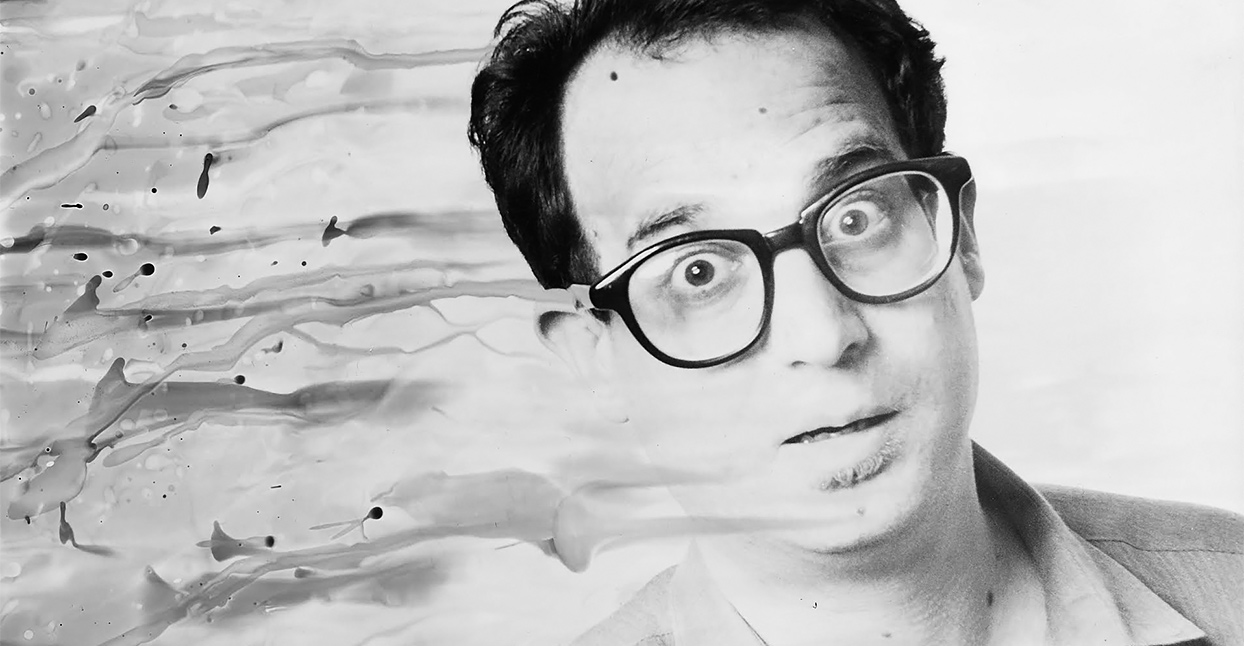 As an undergraduate at Cal Arts in the early 1970s, composer Carl Stone studied with modern-classical legends like Morton Subotnick and James Tenney. While some of Stone’s student pieces were realized on the Buchla 200 modular synthesizer, it was during this same period that he discovered his love of sampling—an aesthetic north-star that guided the majority of his work. In the decades since, he’s worked with a variety of tools—including turntables and laptops—when pursuing his personal approach to sound layering.

In Stone’s vividly imagined canvases of sound, nuggets of Japanese folk songs may collide with vintage Western classical music, or else a Motown motif. He’s performed across America—including at New York’s fabled avant-classical den The Kitchen—as well as in his adoptive home of Japan (where he has also worked as a teacher). Electronic Music from the Seventies and Eighties—a new set on the Unseen Worlds label—collects Stone’s student pieces alongside his mature, sample-based works for the first time. I spoke with Stone about how he fell in love with turntables—and what the listener is meant to perceive (and be surprised by) in the “process music” he creates.

How did the art of sampling first call out to you?

When I was at Cal Arts, I had a work study job in the music library. And my job was to take every LP in the library—and it was a lot of LPs!—and back them up onto cassette, which was the archive medium at the time. They wanted something to preserve the records, which were in general circulation among the students, and would get beat up or scratched or stolen or whatever. They wanted to have something to fall back on. And so they put me in a room with three turntables and three tape recorders and they let me just sort of dub all the time. And the three tape recorders were running in parallel—because if you tried to do it just one at a time, it would take forever.

So I could listen to these musics playing simultaneously. And I started to think: ‘Well, okay, today I’ll put this [Alban] Berg string trio on turntable one, and I’ll put this music from South India on turntable two, and then maybe some electronic music by Pierre Henry on turntable three—and, oh wow! That sounds kind of interesting!”

I was just kind of listening to what worked together, and doing these mash ups. It taught me a lot about the idea of making music out of complicated relationships, from preexisting musical materials. So I got inspired by that—and I began to do similar things in the actual [Cal Arts] electronic music studios, which had you know turntables and tape recorders and stuff like that. So that’s where I did most of the [early] experimentation.

And then a piece like “Sukothai,” from 1977, was produced after graduation, when you worked at a radio station, right?

Yes. By the time I got to KPFK, I already had this idea about doing the layering—which is a sort of geometric procedure where you build up layers from the same material, until it becomes a mass of sounds. That’s the basic technique of the piece “Sukothai.” Start with one [sample], multiply it to two, then four than eight, et cetera—all the way up to a thousand-plus.

One thing that amazed me about that piece is the way you can still recognize some intervals from the original harpsichord sample, even at the end, after everything has been so thoroughly abstracted.

Yeah, you hear the broadest harmonic movement in the piece. You don’t hear the details—those are just smeared over by the thousands of layers. But you do hear the overall broad contours. It’s as if you zoom out from a microscopic level, from note-by-note detail, and into landscape mode.

What piece of music does that harpsichord sample come from?

Ah, it’s the “Rondeau” from Abdelazer, by Henry Purcell. And it’s the theme that Benjamin Britten used for his famous “Young Person’s Guide to the Orchestra.” So that means Britten himself was kind of a proto-sampler. And not only Britten by the way. You can go back in musical history—far, far earlier—and find stuff that Bach sort of wrote and remixed, based on folk tunes. And Brahms sort of did his remix on Bach and on Handel. And Berg taking stuff from a Bach chorale. All these guys were appropriators.

When you were learning how to become a sampling composer yourself, was there a lot of trial and error? Or did it come pretty smoothly?

Yeah, you know you’d be surprised, “Sukothai” was the first piece that I [made] when I was at KPFK. A lot of the experimenting and trial and error stuff happened when I was still at Cal Arts.

Is it fair to say that, back then, you were working under the influence of, say, Steve Reich’s and his “music as a sounding process” concept?

Very much so. That’s absolutely true—and not only Steve Reich, but I think this aesthetic was also shared by Alvin Lucier, in a way, if you think of his piece, “I am Sitting in a Room.” The piece itself describes the process. Or Jim Tenney who was my teacher, also. It was very different from what was going on in serialism and modernist music, where you try to obscure, you try to make things complicated and difficult to parse.

This idea was 180 degrees the opposite of that: here, your cards are out on the table for everyone to see—and they can follow along. And what I hoped was that people would follow along with the process: they can figure out that it was one harpsichord, then two, then four, then eight, et cetera. And maybe in their head they would make some prediction of what the result would be. But! The result would actually be something different—and they would be interested or hopefully intrigued or maybe even amazed.

But what I didn’t know anything about was the work that hip-hop artists were coming up with in the late 70s and early 80s—Grandmaster Flash and people like that. Actually using material from popular culture and cutting it up and remixing it and so on. I came to that completely on my own, and without any influence from those guys. And they of course didn’t know about what I was doing.

Gradually, some of these pieces do start to become a lot more complicated or even mysterious. I’m thinking of studio pieces like “Dong Il Jang” or the live performance of “Kuk Il Kwan,” captured at the Kitchen in 1981.

Yes, you’re right, it becomes more complicated. But still, you get the basic idea of what’s going on. It’s a process. My approach has been pretty much to limit the tools that I use to and try to explore deeply rather than constantly adopt new tools. So I’m looking for techniques that will squeeze the maximum amount of use from whatever material I’m using or or samplers that I’m using … or whatever!

Are there plans to release some of your more recent pieces, as well?

Yes, I definitely would like to. … [They] come from the same embryo, but they are more complicated, formally. Still, to this day, every piece of mine starts or uses appropriated musical material. And so that’s the same—but it’s updated. I certainly wouldn’t want to be making the same kind of music that i made in the 70s now. And I would like to give people an idea of how things have evolved. So we’re working on a couple release ideas. Nothing concrete yet!