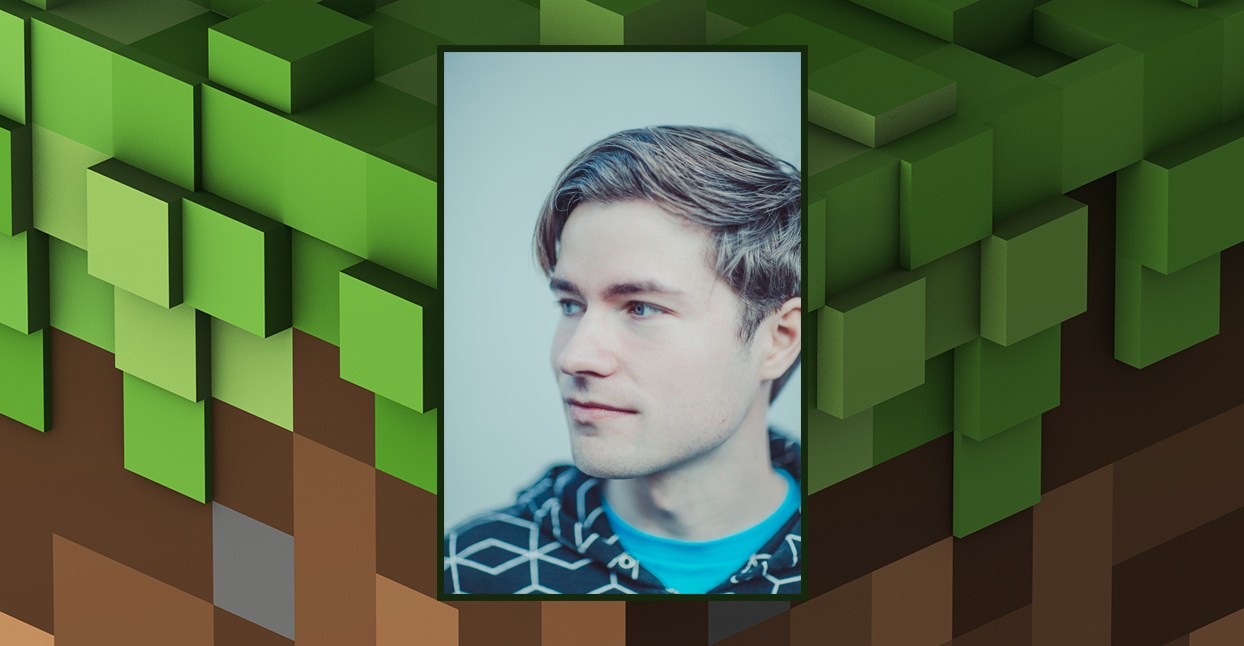 Born to Russian parents in then East Germany just months before the fall of the Berlin Wall, Daniel Rosenfeld, who records as C418, was a hobbyist musician for most of his early life until he met Swedish programmer Markus “Notch” Persson through online indie game forums. Eventually, the two would collaborate on a project that was bigger than either of them imagined. The game was Minecraft, and from its first appearance in 2011, it would sweep the world, bringing the eerily pretty soundtracks Rosenfeld created for the game to a wide audience (and earning Persson enough to be able to casually spend $46,300 on a rare Aphex Twin record in 2014).

Rosenfeld’s Minecraft tracks are often little more than a few notes played in the purest tones—never distracting from the world of the game, and perfectly designed to mesh with the organic sounds, like flowing water, that are woven into the background. Like the New Age relaxation records of the 1970s and 1980s, which were derided at the time as purely functional but have since become a fascination for record collectors, Rosenfeld’s songs contain hidden depths that demand repeat listening and provoke passionate fandom. A self-confessed nerd, accustomed to melting into the background, who never had ambitions beyond messing around with members of his online community, Rosenfeld is fast on track to becoming a bona fide music phenomenon; interest in his new album, Excursions, is already reaching way beyond gamers and his loose-knit network of fans. We caught him for a brief few words en route to Burning Man, where—seemingly to his surprise—he’s been asked to play music.

In your website bio, you mention coming to understand and minimalism as you started on Minecraft. Can you expand on that?

I think my interest in minimalism originally came from Aphex Twin. Being in his universe and obsessively listening to his music drove me into a whole world of experimental and sometimes very ambient soundscapes. Stuff like Machinedrum, Mouse on Mars, and Chris Clark were things that I was super into at the time. And their music was, I guess, very eclectic. Sometimes very loud, and then sometimes just a few notes—that’s all that good music needed for them.

That stuff fascinated me. For Minecraft in fact, I tried to learn how little you actually need in order to have interesting sounds. How few notes do I actually need to play on a piano until it is emotional and moving? Do we actually need special sounds for everything, or can we just use the library we already made and just remix and reuse and see if that creates a comfortable ASMR-like feeling?

Additionally, I was quite simply not very good at foley, but I think that wasn’t a problem. The game might be one of the most successful gaming works out there, but I think the grungy, sometimes amateur-esque audiovisual environment has something comforting about it. It’s like when you look at modern art and say, ‘Hey, I can do this too.’

Your work has become a favorite among lovers of rave and electronic music culture, who like it as soundtrack for the aftermath of parties. Are you a clubber? I’m guessing if you’re going to Burning Man then maybe so.

I am, actually, a homebody. My interest is more in music you can listen to in an airplane and zone out to—something you can obsess over quietly while waiting for your train to arrive. My brother was always into minimal techno, so I kinda sponged that up. But my interest is more in, like, how can this music sound interesting—like a good read that you want to go back over to figure out if you missed something, you know?

Moderat’s song ‘Milk’ is a brilliant example. It’s a track that goes on for, I think, eight minutes or so. It’s extremely simple. It has two chords that arbitrarily change every couple minutes or so, and a very monotonous drum beat. How can you make that interesting? Is that even interesting? And the way they solved that problem is to basically exaggerate it to the point that the song is virtually clipping. It gets so loud that the speakers can’t hold the song anymore. What a ride! That’s the kind of stuff that I go nuts over.

When did you start noticing the cult that had built up around the music? How did you feel?

I think it was when Minecraft was starting to become a thing, I created this little eclectic album called Life Changing Moments Seem Minor in Pictures. I decided to release it on Bandcamp, and I already knew that [the typical pattern is] that I release something, 50 people or so listen to it, and then I move on. However, I watched some of these livestream websites, before Twitch, before Ustream even, and someone was playing Minecraft and listening to that album. Like, someone I’ve never met and someone I did not tell about the existence of that album was listening to it.

That was when I realized that I could maybe move on from my day job and at least experiment with being freelance and make something that I love for a living. I expected to maybe run out of the 15 grand I saved up from my old job and then maybe find a better job in IT and live my life. That was almost 10 years ago, and now I’m driving to Burning Man.

I know you’re planning to continue creating game soundtracks, but how much do you want to concentrate on making and releasing standalone music too? Would you like to be a touring artist, for example?

Bit of column A, a bit of column B, I think. There is a game that I want to spend a while to work on, with my friend Davey Wreden. It’s this crazy experiment on making a game where you don’t ‘earn’ anything and there’s no numbers that go up, but it’s something you can maybe still obsess over if you want to. It’s scary and fun, and there’s so much room for audio experimentation.

And, yeah, I think I should try doing festivals and see what that feels like for me. It’s not even me who was like, ‘Yeah I should do that,’ I was talking to my girlfriend about it and she said, ‘Yeah, we should try that and see what it’s like, while we’re still young and can experiment with what a life like that could be.’ The lucky thing is that both of us can work from anywhere, since I’ve learned how to make music on the road. That’s actually how my new album, Excursions came to be. I wanted to work in different locations and see how my writing style changes. I can imagine doing on-the-road work could make that even weirder and more interesting.

Are you a calm, meditative person, in the way your music is? Do you also make wild and dramatic music?

Quiet, anxious, and obsessive is a better description of me. I easily freak out over having to do a phone call, and some aspects of life super scare me and make me stay in bed maybe once every two months. However, if I make music and am in my little world with noise-canceling headphones, I feel the calmest. Sometimes making music feels like I have my own little Zen garden. I can modify a percussion as much as I can spend hours making sure the sand looks just right and all the trees are well kept.

I make loud and wild music, too, yeah. And I think those come out best when I’m actually in the mood. Sometimes I write songs just after New Year’s. Those can be real good party tracks. A lot of Excursions, while still having my calm ambience schtick, go real wild and crazy. I got really obsessed with classic analog bass synthesizers and how far I can make them scream without modifying them with any distortion effects or anything like that. Though, while I love making that kind of music, I always always always seem to return to music being really calm, and it confuses me. I show friends Excursions, which I thought as real wild and aggressive, and they come back and tell me how relaxing and calming it is. That really confused me until I thought about how I created it.

There is this psychological trick you can do with music. You add the sounds of birds or the crackle of fire or vinyl, and the song immediately sounds better. I think I’ve read how when an embryo is in the womb, it hears the sound of blood rushing and not much more than that. It’s very calming, and we still have that trigger of calm. We like white noise to fall asleep. And yeah, Excursions has a lot of calming soundscapes. Every song starts and ends with it. I guess I seem to keep triggering that sort of trick without ever trying to do so.