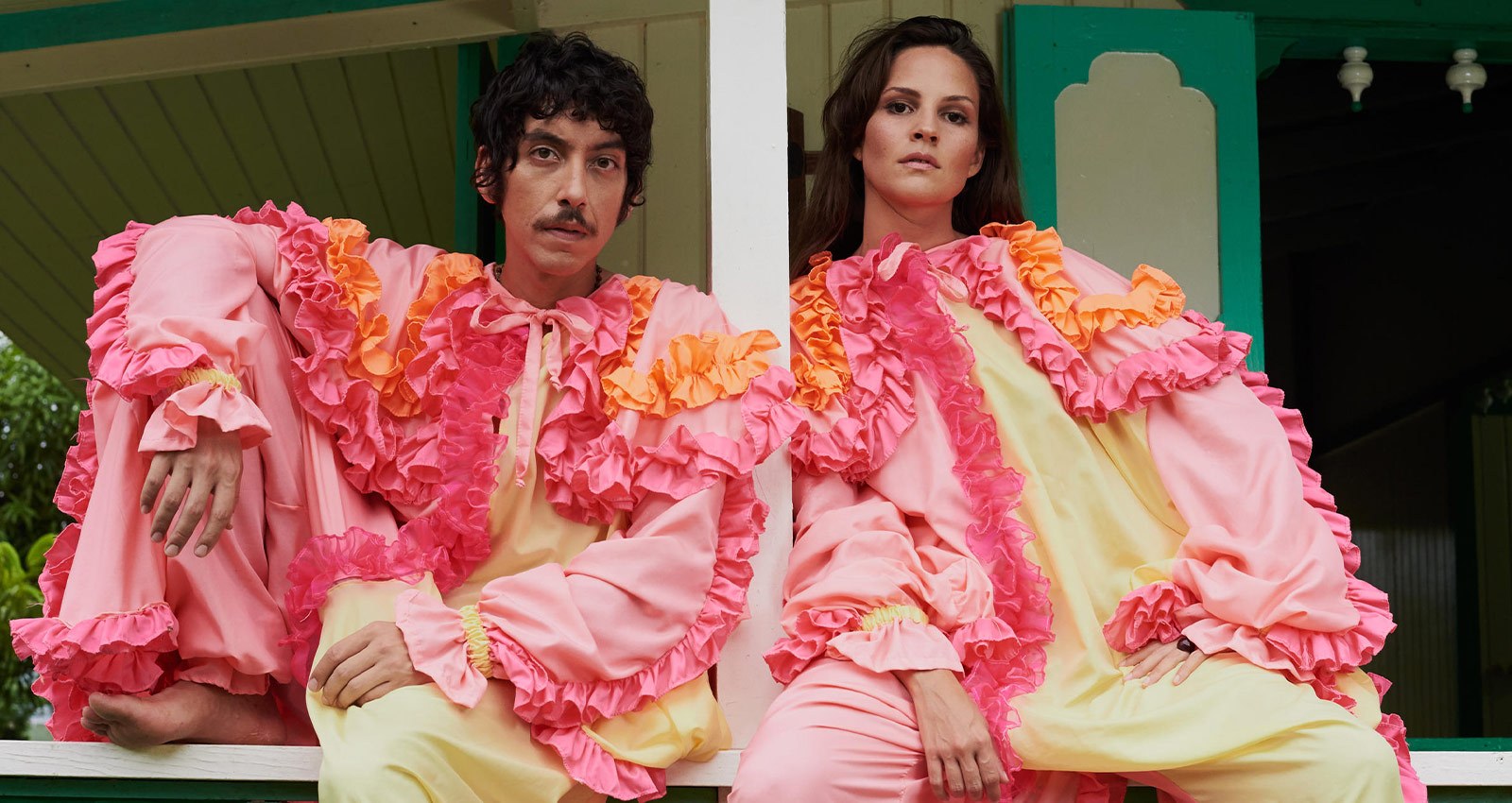 In January 2018, riding high on the buzz from their excellent second EP and a recently confirmed Coachella booking, Buscabulla started their year by saying goodbye. After nearly a decade of hustling to become one of New York City’s most beloved Latinx indie bands, the glamorous couple of Raquel Berrios and Luis Alfredo del Valle had decided to return to their native Puerto Rico, retreating to the placid beach town of Aguadilla to peacefully raise their daughter Charlie and dive wholeheartedly into their work free from the breakneck pace of big city life. Now, after two years of transitions, Buscabulla are finally unveiling their long-anticipated debut album, Regresa.

Throughout most of their history, Buscabulla’s artistic identity has been defined by a mix of beaming national pride and a profound diasporic longing. Early releases combined elements of salsa, reggaetón, and vaporwave into sexy, slow-burning concoctions that nodded to their heritage while ably skirting nostalgia. But a haunting sense of foreboding has crept into the equation in recent years, as Puerto Rico has been continuously besieged by natural disasters, galling political corruption, numerous financial crises, and staggering migration rates. The poignantly titled Regresa, which translates to “return” or “come back,” balances these anxieties with the unbridled joy of their homecoming, creating a tense, melancholy atmosphere that permeates the record.

“It’s paradise, but it’s a hard paradise to live in,” says Berrios. “Now that we’ve been here for two years, I realize I carried an uncomfortable feeling while I lived [in New York]—like I was waiting to exhale. Something in our existence didn’t feel full. So we expressed that longing through our music, both directly and indirectly. There’s just something about this place that always calls you back. I don’t feel uncomfortable anymore. We feel whole again.”

That sense of impending release is evident from the jump on Regresa, with the driving drum lines of album opener “Vámono.” Inspired both by local marching bands and by Beyoncé’s momentous HBCU-themed Coachella headlining set, which they witnessed in person after performing at the festival, the track is accompanied by a cinematic music video drawn from Puerto Rico’s Festival de las Máscaras, combining the urgency of Buscabulla’s songwriting with folklore and local pop culture. On album closer “Ta Que Tiembla,” the band offers a snapshot of an island convulsing under generations of resentment over political and economic betrayals—as evidenced by last year’s cathartic nationwide protests that led to the removal of Governor Ricardo Roselló.

Honoring Puerto Rican music is a catalyst for Buscabulla’s work, but the expectation of cultural uniformity they feel from others can be confining. “Lately I’ve done a lot of interviews with people asking us about being Puerto Rican and not making reggaetón,” says a frustrated Berrios. “It feels like because we choose not to make the kind of music that is mainstream in Latin America, we get shoved into a category of indie music that not many people listen to or can access. I’m very much making music for the present moment. I’m inspired by what I know.”

It’s especially irksome, as reggaetón has always been an influence for Buscabulla; their first underground smash “Métele,” a “love song with lewd lyrics,” was a groovy emulation of urbano swagger. On Regresa, “La Fiebre” once again applies a conceptual lens to reggaetón, examining the fever pitch of Bad Bunny’s meteoric rise from hometown hero to global superstardom without relying on the genre’s rhythmic palette. New ideas and collaborations pop up throughout; they incorporate Somali funk into “El Aprieto” and delicate orchestral arrangements composed by Helado Negro on “Club Tú y Yo.” Brooklyn crooner Nick Hakim drops in for a few assists, playing guitar on “El Aprieto,” singing a ghostly verse on “Volta” and co-writing “Mío,” a deceptively slinky evisceration of the greedy corporations that have stripped Puerto Rico of its economic agency by turning the island into an unsustainable tax haven.

Those financial preoccupations became most pronounced in the wake of 2017’s Hurricane Maria, which devastated the island’s infrastructure and depleted resources throughout the process of recovery. An energized diaspora came together to provide relief, and Buscabulla teamed up with local folk-rocker Ani Cordero to launch the Puerto Rican Independent Musicians & Artists (PRIMA) Fund, a non-profit organization dedicated to raising and distributing $500 micro grants for independent Puerto Rican artists. Since its inception, PRIMA has grown to produce special compilations, showcases, and hire local photographers and videographers to cover new launches, leaving the door open for further evolution. “In the long run we would like to issue artistic grants so people can finish their projects, but at the moment we keep having to deal with emergencies,” adds Berrios, alluding to the ongoing fallout of the COVID-19 crisis.

While Regresa addresses a series of uniquely Puerto Rican predicaments, the album also explores internal turmoil. On “Nydia,” Berrios experiences an existential conundrum, and invokes the wisdom of actress, singer, and Boricua icon Nydia Caro, with whom Berrios worked through her questions of belonging. “It was through conversations with her I found the confidence to finish the album,” explains Berrios, who admires Caro’s rise as an intriguing mystical figure in the 1970’s and ‘80s, at a time when over-sexualized stars like Iris Chacón dominated Puerto Rican media. “It’s about her influence over someone like me. About being OK with her womanhood, motherhood, and spirituality, and how her fabulousness inspires me to keep going and transform myself.”

With Regresa, Buscabulla speaks not only to Puerto Rico’s many challenges, but to resilience, togetherness, displacement, and longing experienced across the diaspora, best encapsulated by the album’s beating emotional heart, “Club Tú y Yo.” Penned by Del Valle and performed by Berrios almost as a lullaby, the song is a loving ode to the emotional anchors they’ve created for each other when feeling most lost. Del Valle describes the song as “a dystopian bolero about love in times of isolation and uncertainty,” a reminder that sometimes when you can’t find your way home, love lights the way.