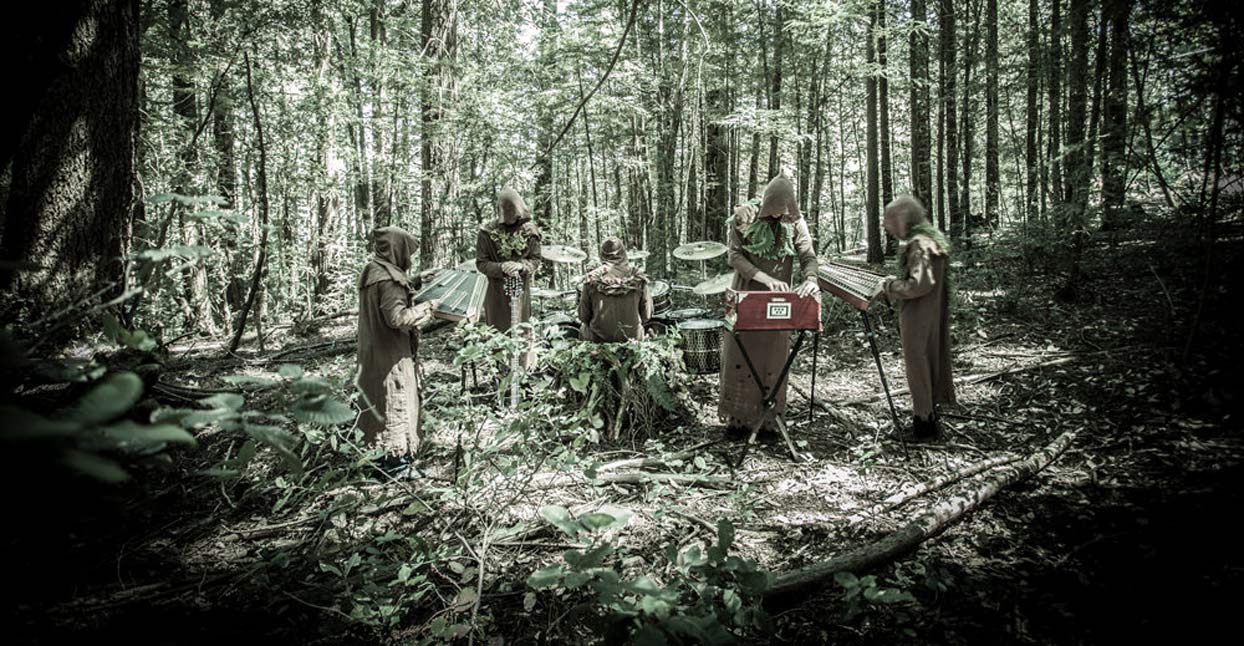 Metal imagery is rife with full of rotting corpses, toothy devils, blasphemy, and meat. Cannibal Corpse, Mastodon, Emperor, Black Sabbath and Deicide—those are the kinds of aggressive band names that are natural fits for the genre. Botanist, not so much.

But for Otrebor, the evil genius behind Botanist, botany and metal go together like leaves and flowers. Since 2011, the San Francisco-based Otrebor has released six albums and three EPs under the Botanist moniker. On each one, Otrebor plays drums and shimmering hammered dulcimer while sing-screaming twisted lyrics about ominous fecundity. “Climb high/ Stems twine/ Grow wide/ Pinnate leaflets/ Jasmine scent/ Behemoth trunk /Immense strength/ Wisteria.”

Botanist’s two most recent albums represent a departure for him. The Collective: Setlist 2017, which will be released in the upcoming months, is a bit more visceral and groove-driven than his previous work, and has a more of a “live” feel, in part because it’s a group effort. Toorpand and Daturus of death metal outfit Sentient Ignition play bass and drums respectively, while Cynoxylon of powerviolence/hardcore band Concrete Walls provides vocals and plays harmonium.  This version of the group is scheduled to tour Europe in the fall.

The Collective: The Shape of He to Come, another group effort, moves even further from his native soil. On this outing, D. Neal and R. Chiang, who have toured with Botanist in the past, wrote and played hammered dulcimer. Bezaelith, who leads the band Lotus Thief (in which Botanist performed) contributes melodic vocals, while A. Lindo of Golem sings the guttural bits. Otrebor himself plays drums and adds clean vocals of his own.

The songs on Shape are more choral and structured, and the lyrics focus more pointedly on the bleaker aspects of Botanist’s vision. Plants aren’t just pretty, they’re pissed off. Humankind’s destruction of the ecosystem has made all the green things angry. People must repent, or they will be swept from the earth, and grass will grow from their empty staring sockets. You don’t get much more metal than that. 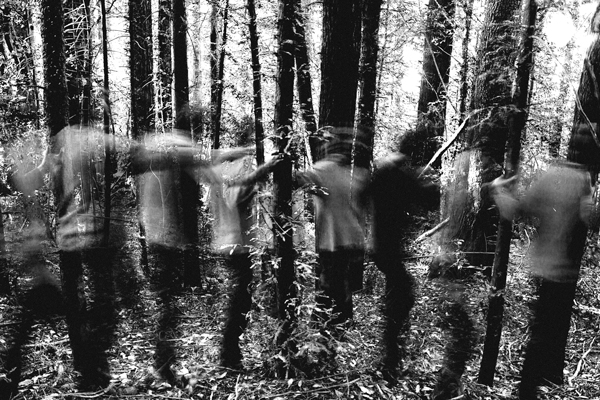 We spoke with Botanist about The Shape of He to Come, his touring plans, and the coming destruction of the filthy human race.

And when Botanist took off, I realized I had a bigger opportunity to make something more of the music, and started really focusing on how can this be important for everything on the planet. I started with the concept of the mad Botanist who goes insane because of seeing the destruction of the natural world and what mankind is doing to it. But beyond that romantic aspect—yeah, we need to save the planet, not for the planet’s sake, but for our sake, because the planet will be okay in the long run.

Black metal usually isn’t thought of as a genre that’s particularly interested in the natural world.

People don’t equate metal with nature. But black metal is the most Romantic music I’ve ever heard; Romantic with a capital R.

I’m influenced by the Romantic period of literature, the late 18th century and the early 19th century. That writing is about embracing the primordial self, having a lot of mystical and near magical attitudes towards nature and human nature, mistrusting organized society and the establishment, and creating things that were not necessarily rational or measurable, but having this fantastical perspective on things. I responded to the wonderment of that.

And all of that, for me, was channeled in this skewed way through black metal. For example, William Blake has been a big influence on Ulver. They made an entire concept album about William Blake.

When I was a kid in high school, I took a Romantic literature course, and it really shaped me. And black metal for me is a mirror of those feelings. For me, black metal was a perfect pedestal to make art that stimulates that aspect of wonderment within me.

People sometimes don’t understand the connection, because it’s weird spikey music. But those spikes are like roses. You can’t touch it, and it’s hard to approach. But when you get past that, there’s all this beauty behind it, even though it seems harsh and weird and unpleasant and awful. But it’s not. And that’s what’s amazing about it.

I love the writings of William Blake. I like Samuel Taylor Coleridge. Shelly I like very much. Lord Byron.

Why do you play a hammered dulcimer? What made you think of that as a possible black metal instrument?

I lived in Japan when I was in college and I saw some guy busking on the street with it one day and thought it was really cool. That was my first introduction.

I came back to the United States and, right away, I started playing drums and got into playing with bands. And, to me, the goal was to make recordings and have them released on some level, even if we did it ourselves.

But it wasn’t happening. So I thought, ‘How can I do this?’ I played drums, and a record with just percussion didn’t seem like it would work. So I found a bunch of instruments that were not particularly hard for me to play fairly immediately, and hammered dulcimer was the one. So I just ran with that.

And, for me, it’s a beautiful sounding instrument. You’re always hitting at least two strings at a time, so everything has a chorus to it. So that whole—going back to the black metal, what I like is the harmonies or the thickness of the different things happening at the same time. So the hammered dulcimer sound tied into what I want out of black metal. 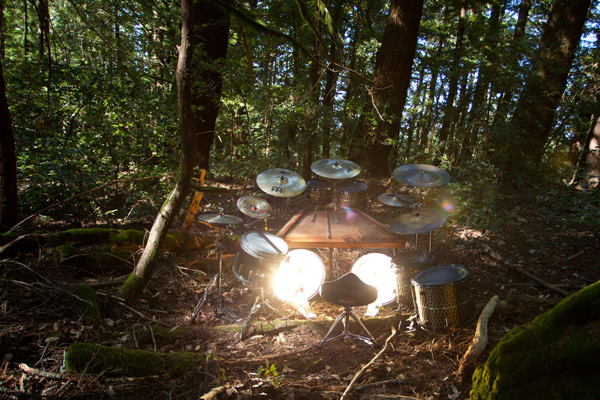 Getting back to your album—the chorus of “And The Earth Throws Off its Oppressors” is ‘See how they are wiped away.’ Are you hoping for human extinction there? It doesn’t exactly sound like a plea for conservation.

So this record lyrically is a little like Botanist’s version of that; it’s not about plants. Usually the songs are about a plant, or an aspect of a plant. But this is more like about the philosophy of Botanist.

Conservation is great, but the idea that we need to conserve for the sake of other species is a little bit skewed. Because yes, other species will go extinct, but ultimately mankind needs to worry about itself, because the earth knows how to flush the toilet. And if mankind annoys the earth enough—that’s the whole chorus, of “And the Earth Throws Off Its Oppressors.” If mankind can’t right what it’s doing, and find a better way to coexist with the planet, mankind’s end is going to happen, and on a long enough timeline the earth will repopulate with something else.

Within the record there’s a lot of negative rhetoric and anger. Humanity as a species within its larger capitalistic attitude is not being very responsible with its future, much less the future of everything that lives around it. So there’s this anger: do something, or everyone’s dead.

And ‘Everyone’s dead’ has this beautiful finality. Because yes, it sucks to think about what species went extinct today. But in the long run a utopia is possible, maybe just not with the inclusion of mankind.

What does the title The Shape of He to Come mean?

It’s about the shape of this messiah that is coming. The title track is about this thing that’s coming, that’s heard throughout the trees, heard over the ocean; it’s various aspects of nature. It’s this harbinger of what’s called the ‘budding dawn’ in the Botanist mythology.

And the budding dawn is the floral apocalypse. It’s that point where whatever sick balance is going on that’s allowing everything to exist together breaks and whatever natural disaster mass extinction happens. And then from there utopia can grow.