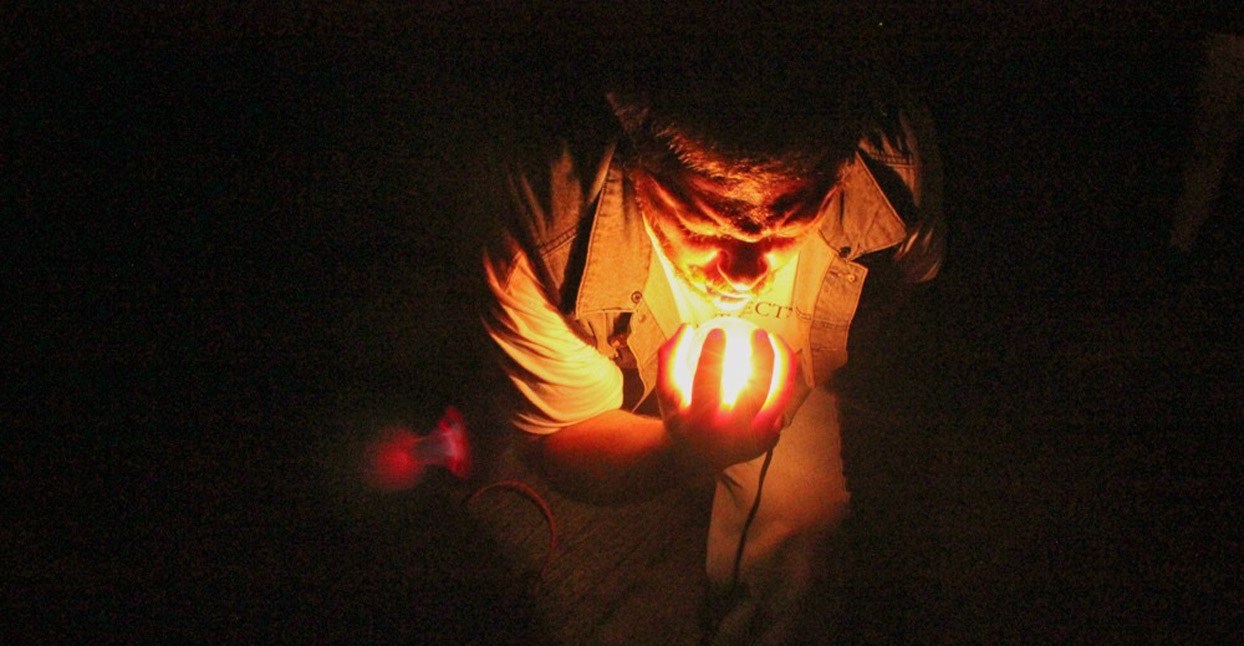 That’s noise practitioner Matt Hex, reflecting on his hometown of Stilwell, Oklahoma. Situated in the northeast region of the state, just eight miles west of the Arkansas border, Stilwell (current population around 4,000, Hex himself included) rose to fame as a minor agricultural hub in the years following World War II; in 1949, the Kansas legislature even designated Stilwell the “Strawberry Capital of the World.” These days, it suffers the worst economic conditions in the state of Oklahoma, with 32.7% of residents living below the poverty line, and a median household income of $24,452 (versus the state average median household income of $45,339), according to a 2015 report.

Not much has changed over the past three years to suggest the opposite, nor has the extreme or experimental music Hex champions by way of his blackened-pop projects, Bonemagic and Video Nasty, taken hold. But the man has his reasons for staying; he’s got a young daughter to take care of, and Stilwell happens to be a very cheap place to live and make art.

Hex was introduced to the heavy-music world in the moments following a fateful Neurosis concert he attended growing up, when he added his name to the mailing list for extreme-music flagship label Relapse Records. With every mail-order catalog sent his way, young Hex would pore over the descriptions for hours on end, imagining what the releases would sound like. “That’s when the floodgate opened and all the knowledge flooded in,” he says.

Once he got older, the musician-to-be finally transitioned from conceptualization to consumption, acquiring releases from Relapse directly. And yet, for Hex—a man with an intense, insatiable creative drive—the simple act of listening proved insufficient; he wanted to forge his own path, as his own artist. He’d received no formal training whatsoever, so instead, he went with his gut, guided by his friends.

“I was jamming with my friend Miles,” Hex remembers, “And we would record these albums that were just goofing off, but that’s where I started getting a type of vocational training. It really helped with getting better acquainted with gear.” The citizens of Stilwell weren’t ready, though, and they made their apathy known: “Anytime I tried to do anything worthwhile in Stilwell, I was met with shit-talking,” he says. “There was this bandstand in the middle of town I would practice [in], not giving a fuck who heard, and I would do sets there, no one watching except the cars passing by.”

There’s a distinct difference between the time when Hex began his research on the music he loved, around 1999, and the time when he began releasing music steadily, around 2009—the internet became more popular, and communication, because of social media, became easier. He began talking to people like Jay Randall from Grindcore Karaoke, for his Video Nasty project, and Sam Stoxen of Minneapolis non-profit noise label Phage Tapes for Bonemagic, and soon enough he had physical releases, and was playing national noise festivals.

In the last couple of years, Bonemagic has become Hex’s primary outlet for emotion and sound, driven by what he calls “perpetual heartbreak.” In a characteristic self-deprecating remark, he says that every time he releases a new Bonemagic full-length, his friends ask with whom he broke up, but that kind of wry aside detracts from serious personal tragedy—he mentions he and his ex-wife suffered the loss of a son during the last weeks of her pregnancy around Christmas 2011, the yearly change in temperature always a cold reminder. For Hex, sadness and tragedy are something to overcome, rather than something to wallow in, which is largely why Bonemagic, even with its melancholic mood, imparts a feeling of triumph. Sculpting sound is moving and joyous for Hex—“if a sound or rhythm gets me excited and anxious about recording,” he says, “then I know what I’m going to create will be amazing, and I’ll feel a real sense of personal fulfillment and release.”

Mixing synthwave with blackened vocals, and coming from a noise and power electronics ethos, Bonemagic manages to be melodic and caustic at the same time. The sound quality and vocal delivery has improved with each release, as Hex has become more confident with songwriting and style. His newest full-length Praise Those That Devour—the third release on Phage Tapes—is a massive step forward from his previous output in terms of fidelity and scale, combining memorable, more organic-sounding synth lines with a desperate, harrowing black metal growl. Most importantly, Hex ramps up the scale big time on Praise Those That Devour.

“Spare Prayers,” the second song on the album, is a Bonemagic song that lives up to the project’s potential. Beginning with an undulating bass, a minimal drum machine rhythm, and a snaking, treble-clef synth, Hex soon transforms the track into something huge and haunted, with his anguished scream front and center. His vocals are intense, loud, and clear. When I saw him perform the song in Tulsa recently, he used no vocal microphone, but still managed to pierce through the amplified backing track. That formula proves true for much of the album. Whereas earlier releases featured songs with melodic, cadence-based singing, all the vocals on Praise Those That Devour gravitate to the blackened, even on a slow piano-driven song like “She Came To Claim The Night,” which comes second to last in the track listing, and is the final piece to feature vocals.

Praise Those That Devour is also Hex’s fifth release of 2018, and he’s showing no signs of slowing down, constantly being roped into splits and collaborations, seemingly saying yes to all of them. “All I do is work and grind,” he says, and he’s got the track record to prove it. All the indifference and tragedy he met in Stilwell early on has proved to be quite the fuel.