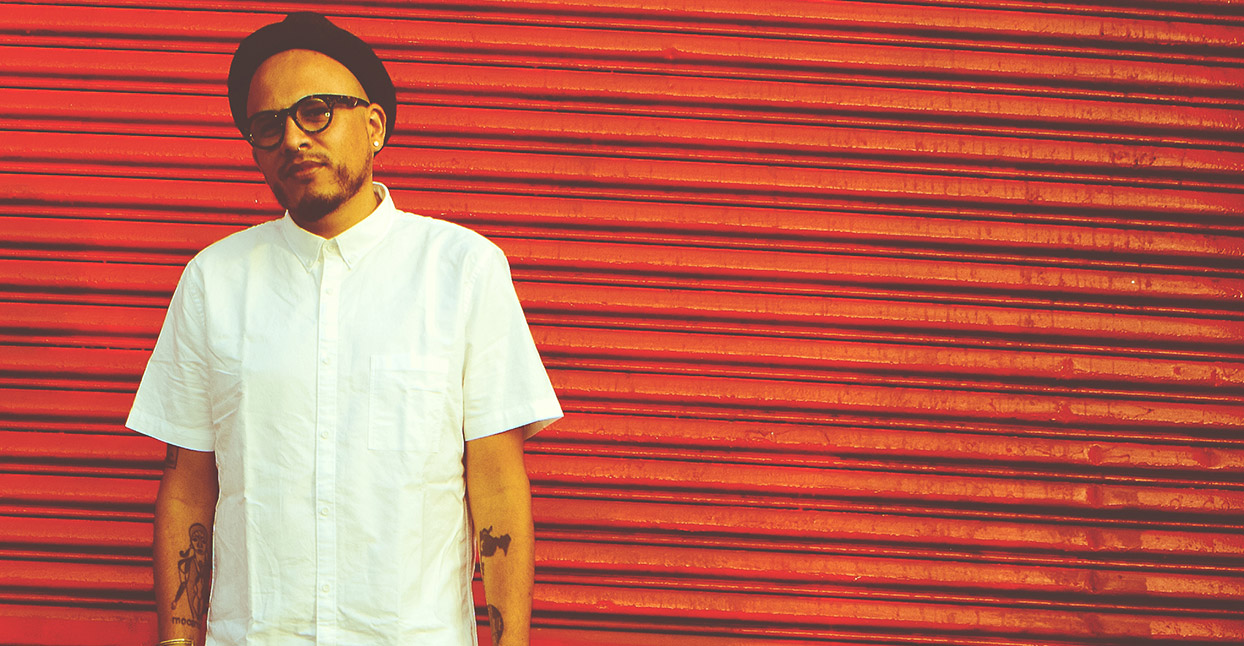 Bocafloja (née Aldo Villegas), a Bronx-based pedagogic MC from Mexico City, has been artistically shattering systems of oppression with his outspoken work for over a decade. Bocafloja means “Loose Mouth,” and he literally spits out ferociously conscious reality-checks that hit quickly, one after another as on his penultimate album, Patologías del Incomodo Invisible. His lyrical critiques tackle class marginalization (“Invisible”), ethnic cleansing through colonialism (“Selva”), and modern-day slavery (“Gris”). Meanwhile, his old-school hip-hop samples and soulful grooves keep things in shoulder-swaying motion.

On his empowering LP, Cumbé—a Yoruba term for festivity—Bocafloja turns to celebrating Black and Brown identities and existences, a sound he describes as “intellectual stimulation…[on] the dance floor.” His hard-hitting lyrical approach remains refreshingly intoxicating: “Estoy alérgico al mapa de don Cristóbal/ un estornudo en la punta de su diploma” (“I’m allergic to Columbus’ map/I sneeze at the tip of his parchment”), he raps on “Oreo,” a reimagining of Eurocentric and Black history. Solidarity is ever present on the uplifting “Sankofa,” where he spits, “Mi narrativa es la voz de los invisibles” (“My narrative is the voice of the invisible”); the song title is in the Ghanaian Akan language, meaning “go back, look for, and gain wisdom.” The funky “Fakir” celebrates the illuminated iconoclasts of the world, while “We Do It” reps the unification and building of communities. Meanwhile, his live backing band’s energetic electro beats will inspire even staunch wallflowers to keep moving and grooving.

We caught up with Bocafloja, who spoke to us about the cultural dynamism between New York and Mexico City, Trump and white supremacy in America, and his celebration of his roots on his newest album.

In your last 2012 album, Patologías del Incomodo Invisible, you rap about decolonizing the psyche from the cultural hegemony, and Cumbé is a celebration of Latino and Afro identities. The sound production has also shifted more towards the electronic dance side. What led to that transition?

For me it was necessary to find a new dialogue with my own artistic expression. I was definitely trying to make a more upbeat and celebratory type of album when it came to the musicality. The lyrics and the message continue being transgressive and committed politically. I think it opens the possibility when engaging with people in a more celebratory experience.

Tell me about the beat-making process. Who was involved?

It’s a group of producers from all over the place. I have some people from the UK, Spain, and the US, and also some from Mexico that I’ve worked with throughout [different] projects. So it’s quite diverse. I’ve been working with a different group of people. Also, I guess the main difference is that there are a couple of tracks that are all Latin instrumentation, and instruments from my own band, ‘cause now I’m performing with a whole band, so musicians are involved in the production.

What are some of the sources that you’ve drawn creative inspiration from for this particular album?

Actually, for this album, I was really impacted by the use of comedy as a way to elaborate a political discourse. I’ve been really connected to the experiences of guys like Dick Gregory or Richard Pryor in a way—that they engaged into this critical analysis through this use of comedy. In that spirit, I was trying to use or utilize dance as a dialogue from emancipatory agendas. Besides that, of course, Black Lives Matter has been inspiring and the struggle of what’s happening in places like Mexico with maestros and all that stuff. It’s always been part of my closed reality.

On that note, there has been crazy turbulence in Mexico lately, especially with the attacks on teachers unionizing in Oaxaca. The reality is that the “truth” gets distorted through official news outlets, so music and social media have become more accurate alternatives. What are some ways that we can create some sort of creative resistance?

We currently have the responsibility to not only search for other forms of information, but to create them. In our case, as cultural producers, or as people that produce content or knowledge, we have to create other platforms that happen to be alternative to what is normally offered. That’s the only way we’re going to push the narrative that’s related to our existence. Everything of course is mostly controlled by the power structures, and in that sense, we have to elaborate a new dialogue, new platforms, and create our own and build in that spirit.

For someone who’s never visited Mexico, how would you describe the cultural space there?

It’s really complex; it depends on the standpoint that you’re analyzing. Mexico City in particular, where I’m from, is a huge metropolis, and the cultural diversity is enormous. It’s like as active as any other big city in the world. The difference is the way that race is constructed in Mexico and Latin America, for example. It changed the whole dynamic because racism operates a little different, and systematic oppression happens when it operates more in your face. It’s quite different, but in general, colonialism is more evident, especially when people like myself are embracing the Black and brown experience. So in that context, there is some cultural shock that’s more evident. It’s the complexities of the regions in general and the complexities of identities in a political sense as well, but it’s definitely an interesting place to check out.

New York is such a melting pot of races, classes, and people of diverse backgrounds. For you, who travels back and forward from NY to Mexico City often, is performing in the US drastically different from Mexico in terms of audiences?

Yeah, it’s really different. New York has some sort of arrogance and a certain type of attitude—the city that concentrates on the center of power when it come to arts and culture. There’s some level of arrogance in people [here] in a way that sometimes fans react a little indifferent and not really surprised [about diverse works]. There’s a mercenary dynamic of arts and culture in the context of New york, and there is a lot of competition and [people] get really upset if you make it in New York. In that sense, we have to contextualize that I grew up in Mexico City as a person and an artist. So in that spirit, I’ve been building and working there for years. I’ve been part of one of the first generations of hip-hop artists in the city and the country. So I found a fanbase that’s bigger in Mexico than in New York. The engagement with the people is more active with my project in those areas at least when it comes to my music. I still do other projects like film and other stuff, but music-wise when it comes to people in [my] concerts in  Mexico, they are more active, they participating more, and their reactions are more vivid.

Which artists in Mexico do you feel as of like mind to you, and who you are also collaborating with artistically?

I’m mainly working with this new female soul singer whose name is Imma Soul, and it’s been really good especially when it comes to the gender situation. There aren’t a lot of voices in Latin America with rap and soul music that are defending other narratives that are politically engaged with race, gender, and class. So it’s cool and there’s another group of friends and musicians—Danny B., he’s one of the other producers. I’m working in a studio where they do visuals and musicians called Limonero. They are really active in producing the type of work that I do. It’s a good mix of people when it comes to the local Mexico scene.

What are some of the other projects that you’re working on?

I released a documentary in December called Nana Dijo, which is about colonialism, race, politics, and the African diaspora in Mexico and Latin America. It’s been quite successful, and I’ve been touring with the project in europe and cultural institutions and in the US. I’m really excited about the impact that the film has been generating.

I think it’s really cool that there’s been more representation of the African diaspora in culture and arts. Many people that I’ve encountered here are really surprised when they find out that Mexico has a prominent Black population, so it’s great that you’re shedding light in that.

The process of historical erasure of the indigenous and Black populations in Latin America and particularly in Mexico is really dramatic. What we’re trying to do is go beyond pushing this idea of visibility, but also opening a dialogue for political empowerment and dealing with identity in the way that it is connected to knowledge production and historic rescue of our narrative. So far it’s been quite successful in that way.

What is your standpoint in American politics, specifically with Trump running for office?

We all know the meaning behind a guy like Trump being elected. It’s like the triumph of whiteness in its worst way possible. The worst neoliberal face is being represented through this person, but the thing is that in reality the politics behind Hillary Clinton’s agenda are not so different. It’s just the way it’s packaged and manicured. Liberal democracies—Hillary Clinton is one of the main faces behind that process, and [Democrats] are quite slightly more sophisticated when it comes to presenting themselves and creating this false illusion of a different type of agenda when in reality it’s quite similar. We all know their policies on immigration, on race, on national policies. So it’s not easy. The US is a quite complex place right now.

You’ve also been giving lectures within the university circuit. How has that been for you?

It’s been good. Strategically, it’s a way for me to finance projects, because, unfortunately, in Mexico or Latin America, the university circuit is not financially sustainable because of lack of resources. But mainly because the lack of interest and recognition in the type of narratives that we defended. So in a way, I’ve been able to infiltrate some spaces, and pay the bills and do the work, and socializing intellectual work with a whole different narrative. The idea is to occupy those spaces and bring the knowledge back to the community and finance them with projects and do cultural and intellectual production that is on an academic level but with different intentions, with a different agenda, and use of different language. More than anything, a different body. It’s mostly dominated by white male bodies, and it’s important in that sense to have different faces and voices in order to be represented in those places.

What are the upcoming projects you’ve got coming up this 2016?

I’m gonna keep promoting the album and have the official release show in Mexico City by the end of July. I have some performances in Europe which I’m going to combine with a documentary screening. I’m also going to present some of my music and work on a play. Still finalizing that project, so hopefully by the end of the year I will have that ready.