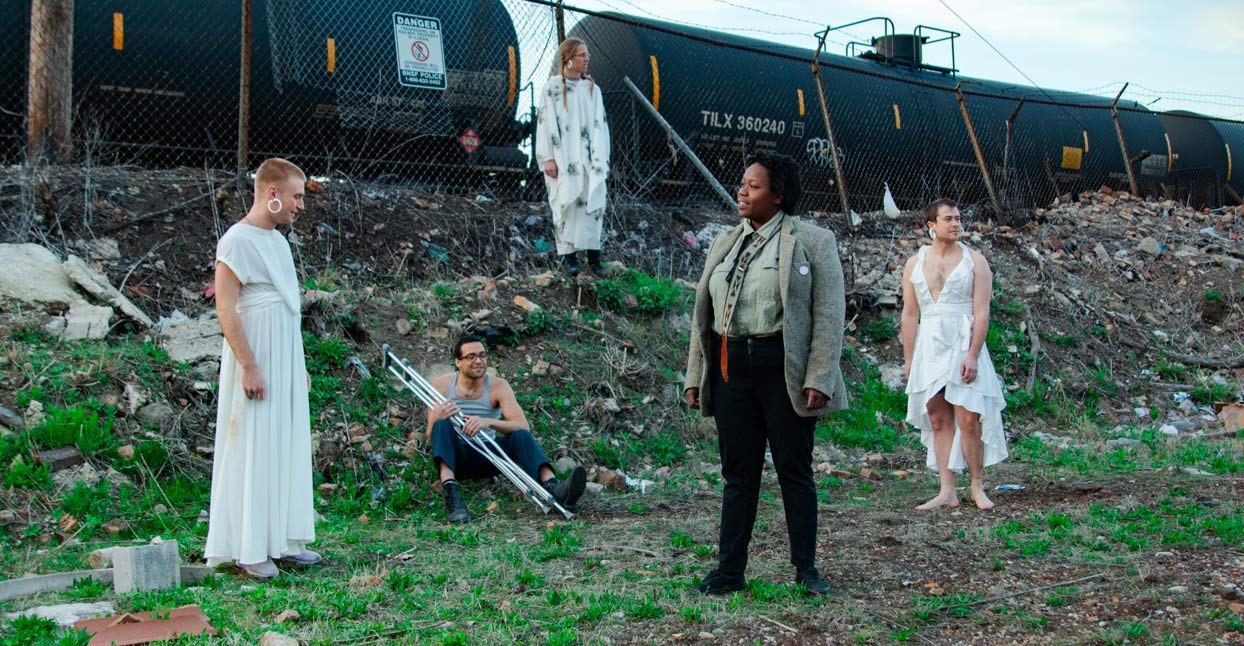 “That’s why I like working with Black children,” says Jolene Whatevr, vocalist of Chicago art punk quintet Blacker Face, who sports black and neon blue hair. She’s laughing about the kids she teaches at camp, and the ways they respond to her appearance—“‘What are you? Some kind of rock star? That’s white!’ I respond, ‘Yes, I’m a rock star, and it’s Black as hell! Rock is Black! You are a rock star!’” That affirmation, and the ability to reclaim a hijacked narrative, is central to who Blacker Face are. So is their penchant for musical scavenging—they way they bring bits and pieces of jazz, gospel, punk, and noise (plus, the most harrowing shriek this side of The Body) to their music. On their new LP Distinctive Juju, you might even find it all in one song.

Blacker Face began as a four piece in Oberlin, OH, where PT Bell (bass, vocals), Noah Jones (drums), and Isaac Nicholas (guitar) went to college. Whatevr, Nicholas, and Bell had been friends since childhood, attending the same DIY gigs in high school, playing music together: Whatevr would sing hooks on Bell’s hip-hop project W.O.R.D. (World Order of Rap Domination), or in his funk band with Nicholas. Eventually, she also moved to Oberlin, and on September 14, 2014, Blacker Face was born. A handful of songs from the band’s time there exist on Collected Works 1987-2016—an assortment of both soulful pop earworms (“She’s My Everything”) and noise rock nuggets (“Duality Fuck Me,” “Id”). Jones and Whatevr then moved back to Chicago in 2015; the band’s roster was scattered until 2017, when everyone assembled there together, and Louis Clark joined on keyboards.

These days the five members of Blacker Face live together in a spacious loft space in Chicago’s Little Village. In the middle of their shared area is a low table, lounge chairs, and a big shelf, filled with books from the assorted tenants’ collections, arranged in no discernible order. Like the band’s music, the collection of books pulls from a lot of places—from Black radical traditions, poetry, history, modernist literature, science fiction, and ergodic literature (including four copies of House of Leaves). It’s clear within minutes of entering the group’s living quarters that a constant exchange of ideas and knowledge is what keeps them all on the same page.

Distinctive Juju distills those ideas into 40 minutes across eight heavy tracks of stutter-step, gospel-infused art rock. From the moment the first song—the rollicking, conspicuously-titled “My Life Matters”—rolls in, it’s apparent that the realities of Black existence and systemic racism are central to the record. It’s a song so tight and eclectic that if the listener isn’t paying attention, Whatevr’s dramatic delivery might cover up her haunting words: “So many bullets in a gun/ Never believe all it takes is one.”

“Metalocalypse” boasts an anthemic chorus—plodding, distorted guitar facilitates Whatevr’s volcanic vocals overtop quiet, cool verses. “You’re all a bunch of racist shits that don’t give a fuck what I say,” she yells on a frantic, free-jazz-style bridge, before bringing the hook back one final time.

Because of the group’s unapologetic willingness to call out systemic racism, they’re often put in the uncomfortable position of feeling as if they have to justify their perspective. Bell jokes about the time that he and Whatevr were asked by an outlet to write an essay explaining how their art relates to the Black experience. “It felt like punishment in a way,” he says. “Remember when you did something bad at school, and then you had to write 500 words about it? Now it’s like ‘You did bad music, so you have to write three paragraphs.’”

For all the conceptual weight of Distinctive Juju, it is predominantly a fun record, full of life, energy, and constant change. From the bouncing blues on “Fuck it,” to Whatevr’s constantly shifting, expressive voice, to all of the structural complexities of their songcraft, Blacker Face always manage to surprise—using their communal cultural lexicon to be the rock stars only they can.