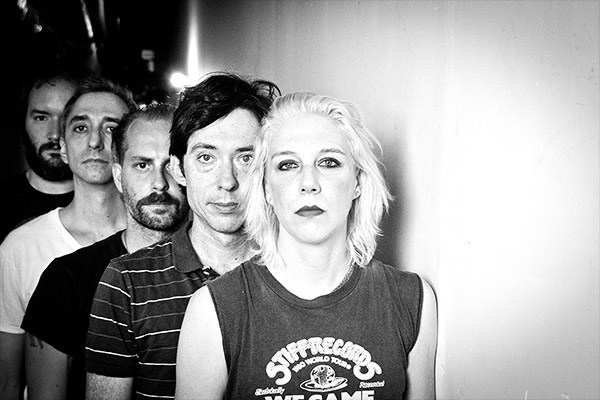 “These songs are so dependent on people understanding what I’m saying. The lyrics are key. They are to me as the writer, and I think they are to anyone who likes our music.”—Beth Wawerna

Beth Wawerna started writing her own songs after working several years as a music critic. Needless to say, she has a way with words. Her lyrics are incisive, packed with creative wordplay. On Get Off, Wawerna’s second outing as Bird of Youth, those lyrics center around grief and self-destruction, detailing Wawerna’s struggle to process her father’s death. But the results are never indulgent or navel-gazing. Instead, Wawerna’s found strength and forward motion in her dark places.

Having a steady roster of musicians supporting her on this outing is a change for Bird of Youth. Wawerna recorded 2011’s Defender with a rotating lineup of musicians. Since then, however, the band has solidified, which allowed Wawerna to experiment more in her songwriting. The benefits are clear: Get Off runs the stylistic spectrum, from the witty snarl of “Bitter Filth” to the hazy, drugged-out dreams in “Burn.”

Bandcamp caught up with Wawerna to hear more about the making of her sophomore album.

How do you feel you and your music have changed since the first album?

The first album was written a much different way, and recorded in a much different way. At that time, I didn’t really have a band, or a set group of people who practiced once a week and all that stuff. I had written those songs myself over a 10-year period. When I decided to make the record, I just called on all of the musicians I knew, and people would come into the studio for a day. Someone would play drums for four songs, and someone else would come in and play drums for two songs. I’m proud of that record and I love it, but [the lack of a solid lineup] does show.

For this album, I really wanted it to feel like a band — like a proper, ‘capital-B’ Band. Over the five or six years between the records, I was able to put together a consistent group of people, and we started to do the stuff you’re supposed to do: We were practicing once or twice a week, we were working out arrangements to new songs together as a unit. I think that really changes the way things sound. When I listen to this record, it feels cohesive — not just thematically, but in the music. When you learn how people play, you learn how to play together, and everyone’s contributing the thing they do best. My favorite bands are The Replacements, Elvis Costello & The Attractions and Squeeze — bands who had the same people playing music together for 20 years. I really aspire to that.

The other thing that’s changed is the songwriting. On the first album, it was kind of a hodge-podge of different pieces of songs that I had started and finished over a 10-year period. Because of that, the thematic thrust of the record wasn’t as focused. I don’t think it was telling a cohesive story. This record is very, very different. It was written in a much shorter amount of time, and it was written about a very specific time in my life. I’m really proud of that.

Do you feel like your actual songwriting process changed as well?

It had to, out of necessity. With this one, the process changed more for me emotionally. This record came out of a tragedy, and a really difficult period in my life — a lot of depression, just a lot of crappy stuff. It felt necessary, in a way that the other one didn’t. Not that that’s better or worse. This one was written in frantic spurts. I would not write something for a week, then I would sit down and have to get something out — like I was expelling a weird memory, or writing about how I felt that day, which was terrible. It went in fits and starts, whereas the last record was, ‘I’m gonna sit down and finish these songs, a couple hours a night.’ This one felt a little more frenetic and frantic. I think some time I’d like to find the middle ground between the two. If that exists.

The album title, Get Off, can mean so many things. What does it mean for you, in the context of this album?

I think there are a lot of ways it relates to the material. ‘Get off’ one way is sex, or release — and that’s very much on the record, as a release or a distraction from real life. I think you can take it to mean drugs and, without getting too much into it, that’s also a big part of the record. I was grieving and going through a really difficult time, and I was reaching for things to help cope and to distract me. And lastly, I would say, is the more ‘fuck you’ kind of meaning, which is really the umbrella for the record. I was so angry and sad. It’s not just about the death of my father, but it’s about the music industry, and about getting older. There’s a lot of anger on that record, like ‘Fuck you, death,’ ‘Fuck you, my job,’ and ‘Fuck you, music.’

I read the press release before I heard the album, and I was surprised that the music wasn’t more outwardly angry. It’s actually very melodic.

We didn’t set out saying, ‘This is what we want it to sound like.’ It all happened naturally. I could’ve sat down and said, ‘I want this to be a punk scorcher.’ Part of me wanted to do that, in a way. And there’s a couple songs that do that naturally, and I think that’s because of the thrust of the lyrics. There’s a song called ‘Bitter Filth,’ which is super ‘Fuck you, kiss off.’ There’s a song called ‘Sons and Daughters’ which also has some of that in it. Some of the songs are more specifically about my father. I’ve had some people say that the songs are a little bit jaunty — kind of like a pop song.

I lost my own father last year, and I was surprised how much my aesthetics changed at that time. Did anything surprise you about the grieving process, as far as how it influenced your own music?

What surprised me more than anything was how easy it made it to create art. Even though it was fraught, and it was painful, and it was hard to re-access those feelings, it was so necessary to me in a way that I was not expecting. Everyone knows great art comes from hardship and pain. You hear that your whole life, and you hear the records that you love that were influenced by something similar, but until it happens to you—it’s a really funny thing. If I’m being honest about myself and my work ethic when it comes to making art, I can procrastinate a lot. I’m not the person that spends 13 hours a day with a guitar or a notebook. It’s been very hard for me to focus. I think that had a lot to do with it being six years between records, and not for lack of wanting to [make another record]. But what happened here was like something was beating itself out of me. It sounds so cliché, but it really was true.

I’d spent about a month with [my father] before he died in hospice in Arizona. I didn’t do anything when I was there. There was no writing songs. It was like, ‘Now I am focused on this thing.’ It was all I could do to sit there with him every day and just get through this, basically, for a month.  And so, when I got home, I was scared. I was like, ‘Shit, I know I need to write about this.’ It kind of worried me that I hadn’t written anything when it was all happening in Arizona. But then it was immediate. Literally. I remember flying home, I got to my apartment, I woke up the next day, and wrote both of the ‘Dad’ songs on the record that weekend. And they were easy. They came out of me so quickly and so effortlessly, and they were so honest in a way I didn’t know how to be until that point.

One of the songs that really caught my ear was ‘Burn,’ and I was hoping you could talk about it.

Yeah, that one’s a funny one. It’s the one that everyone’s like, ‘What the fuck? Did she just write an eight-minute psychedelic song?’ In terms of the music, which is what came first, that was just me fucking around with my guitar. That little riff in the beginning is something I’d had sitting around for years. I knew when we recorded it that I wanted it to sound like this noisy, psychedelic weird shit. It had been in the back of my head for a while. And when I was working on this record, I had some lyrics in mind for it, and it seemed like the perfect fit.

The lyrics for that song are really dark and really nihilistic and really terrible. That song is about one of my darkest nights in the aftermath of my dad’s death. That’s the one song that actually says ‘get off’ in it, which is intentional because that song represents all three meanings of the phrase to me. There’s some drugs in that song; there’s some really dark shit, there’s some sex in that song. It’s really about getting yourself kind of fucked up and staying up all night, and just being in this horrible, horrible dark place. Clint Newman, who is my lead guitar player and main collaborator, when I brought him that riff, I asked him, ‘Is this totally weird? It’s so not what we do.’ And he was so happy and said, ‘Let me run with that.’ So he did that guitar solo, which is the greatest thing in the world. It’s definitely a weird one, but hopefully not so weird that you’re like, ‘This shouldn’t be on this record!’ Because, to me, it fits thematically.

What can people expect when they see you play live?

Our live shows the past few years have finally reached the point where we had a consistent band of people. I feel like that has done wonders for us in terms of playing live. Before that, it’d be every six months we had a new drummer, or our keyboard player moved to London. Now we have this group of people that really know how to play together, and that’s really changed things.

The one thing I’ll say that’s difficult—and I’ve talked to a lot of other musicians about this—for me, my music and these songs are so dependent on people understanding what I’m saying. The lyrics are really key. They are to me as the writer, and I think they are to anyone who likes our music. We play in a bunch of iterations sometimes. Like, we’ll do the full band rock show, which is five of us. It’s loud, and it’s rock and roll. I love doing that. However, Clint and I sometimes do acoustic dates together, literally one guitar, and Clint and I singing together. And those are the shows where people come up to me afterwards and they’re, like, ‘Wow, that one song.’ I get those kinds of reactions. I love playing that way, too. When you strip it all away, you’re forcing people to hear the words, and that’s a whole different experience.

But I really love both. There’s something about having the rest of the band behind me that’s amazing, and I get to play some of the more ‘fuck you’ moments in a setting like that. So I love both approaches equally. They’re both like my babies.

Photos by A Horse With No Name