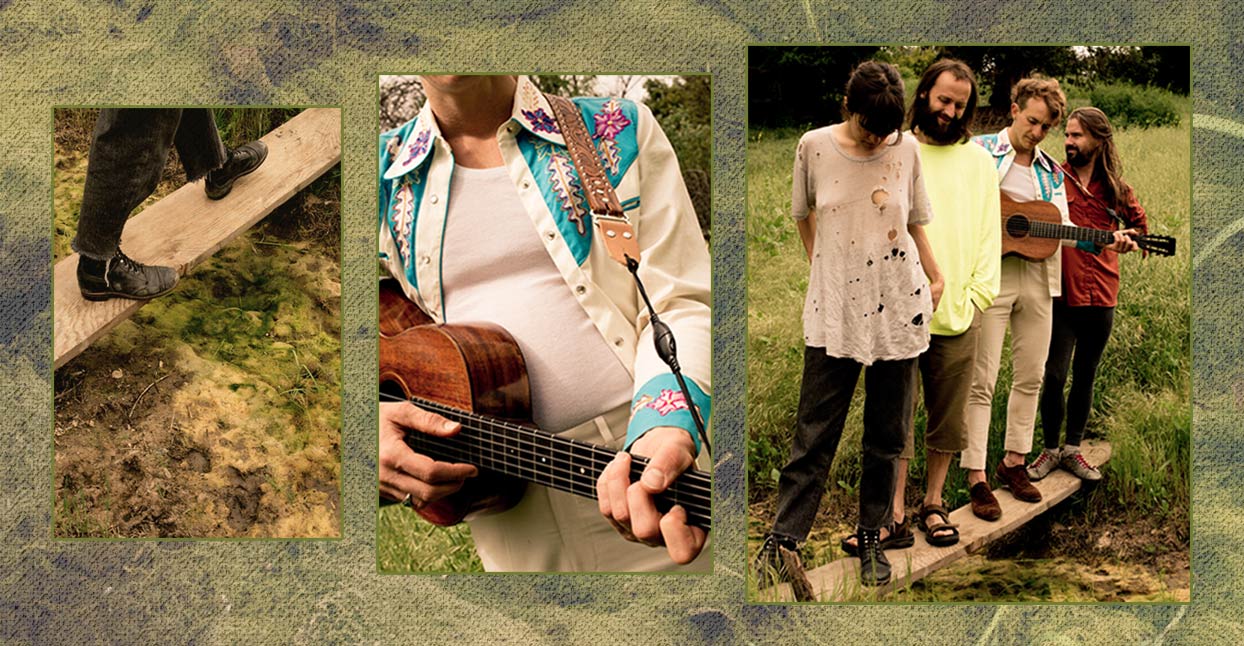 When I reach Adrianne Lenker by phone she’s just arrived in California—specifically, at an empty house in the hills of Topanga Canyon overlooking the ocean. In a few days, the house will become a temporary home for Lenker’s band Big Thief, which includes guitarist Buck Meek, bassist Max Oleartchik, and drummer James Krivchenia. The group will live here together for a month, and eat, sleep, and rehearse for their upcoming tour. But today, the mountaintop hideaway is Lenker’s alone—one in a long line of interim homes for the songwriter, who ditched her Brooklyn apartment three-and-a-half years ago in exchange for a life on the road. “We basically set out on tour and kind of never went back,” she says. “When I’m not touring, I’m just visiting with people, or renting, staying in an AirBnB or a motel. I like it, but the grass is always greener in a way. I think I’m craving a space where I can be still. But I imagine if I had the stillness, I’d be longing for the road.”

Lenker’s complicated relationship with her life in perpetual motion is one of the many inspiration points behind Big Thief’s latest record, U.F.O.F. Anchored by Lenker’s vocals, U.F.O.F. (the last F stands for “friend”) sounds as expansive as its title implies—a shimmering collection of songs about “the blood and the guts of the human experience and the outward wondering about the mystery of it all,” says Lenker. It’s the most ambitious music Big Thief have ever made. Compared to the band’s last two records, U.F.O.F.’s arrangements are fuller, brighter, and harsher, delivered with the kind of ease that can only come from years of living, working, and creating side-by-side. “While we’re on the road, we love to talk about the records we’re gonna make,” says Lenker. “This one kind of started as a swirl of colors. We were thinking about our more ethereal influences, digging deeper into the rawness of our sound as a band, but also simultaneously branching out and stretching up into the sky a little bit more.”

To properly capture their bigger ambitions, Big Thief decamped to Bear Creek Studios in rural Washington with longtime friends Andrew Sarlo and Dom Monks. “We wanted it to be one big moment of energy with lots of passions,” recalls Krivchenia. Many of the tracks on U.F.O.F. were recorded live—some in just one or two takes—in the studio’s cabin-like main room. “Dom had this focus on the microphones and capturing the sounds of our instruments, so we were able to dance a lot more,” recalls Lenker. “It felt more like a playground. The record is this stream-of-consciousness experiment with sound, and he really captured our deeper exploration. We expanded beyond our instruments a little bit, I think, and created these landscapes.”

Big Thief’s “experiments with sound” began in 2014, when Lenker was just 21. After graduating from the prestigious Berklee School of Music, she moved to New York and met Meek in a neighborhood convenience store. Bonded by a shared love of classic folk-rock artists like The Band, Neil Young, Joni Mitchell, and Fleetwood Mac, the pair started playing music together, and eventually saved enough money to buy a van to tour in. Lenker and Meek traveled the East Coast as a duo, and recorded an album under the name Adrianne Lenker and Buck Meek, before officially forming Big Thief with Oleartchik and former drummer Jason Berger in 2015. Together, the quartet scraped up enough money and gear to make a record in a friend’s house in upstate New York, which became Big Thief’s arresting 2016 debut, Masterpiece. Not long after, Big Thief’s music caught the ear of Luke Temple (Here We Go Magic), who brought them on tour, and connected them to Saddle Creek Records, as well as their first booking agent. Their stunning breakthrough record, 2017’s Capacity, followed shortly after.

Led by Lenker’s stunning, vulnerable lyrics, Big Thief’s songs have the keen ability to command attention. Few do that as well as U.F.O.F.’s opening track, “Contact.” The song begins with Lenker’s trance-like voice and Meek’s droning atmospherics. “It started as this exercise about the movie Contact,” says Lenker. “I was looking at this heroine [played by Jodie Foster] who was so brave and so passionate, but didn’t receive much recognition, and had to fight through life. She had this deep longing for contact with the unknown—she was so committed to it. I thought it was so inspiring. That’s what I want to be like. Sometimes I feel like I get there, but then sometimes I’m so far from that—I’m caught by the traps of my ego, or all these things that make me feel smaller. That whole beginning section [of the song] is this brooding, numb state—a state I’ve been fighting my whole life. When you’re depressed, you can go to this place where you could be run over and not even feel it. There’s this disassociation from the body. But at the same time, you can see the sun, you can see the wind, you can see all the life around you. You can recognize that there is life being breathed through everything, but somehow you just can’t feel yourself connected to it.”

Around the three-minute mark, “Contact” is jolted from its slow, languid rumination on depression by a jarring onslaught of noise, accompanied by Lenker’s big, blood-curdling scream. “The idea was this person who could sort of see the sunlight through the water, and suddenly they feel this hand on their arm and they get pulled up. Their lungs fill with oxygen and they can feel the joy, they can feel the loss, they can feel the beauty, they can feel the nastiness—they can feel everything suddenly because they’re alive. That scream is suddenly feeling the deepest and oldest wounds. It’s the scream of birth—of being knocked back into life.”

It’s not hard to imagine Lenker processing her feelings so viscerally. In conversation, she seems to be perpetually listening, absorbing, and interpreting everything around her. “The creative process is not separate at all from me as a person,” she explains. “Anything that happens creatively is just an overflow of exactly what’s happening in my life.” Lenker’s empathetic spirit is not only at the core of her songwriting, it’s at the core of Big Thief itself. “If there’s any conflict, no matter how small, it’s nearly impossible to play music,” she says. “We’ve gotten to the point where we just have to talk—we have to spill everything. We have to feel completely connected in order to fully get into that creative space. It’s kind of like being in a romantic partnership in that way.”

It’s a partnership that every member of Big Thief has put their faith in—and one that they all believe is built to last. “On our last tour, I was like, ‘Hey, we haven’t really had this conversation in a while, but, what do you guys want?’” recalls Lenker. “We had a notebook, and we went through and said things individually, and we said some things collectively. Nobody was like, ‘Oh, I wanna have this many ‘likes,’’ or ‘I wanna be this big,’ or ‘I wanna like be able to afford this.’ Everyone was like, ‘Well, I wanna feel really good in our friendships together’ and ‘I wanna be even more curious about what records we can make’ and ‘I wanna make records that I can’t even imagine that we would make.’ It was all the same stuff that we said in the beginning. We all want to feel even closer as friends. We all want to have even gentler communication with each other. We all want to blow our own minds with our expansion and our creativity and learn more about contacting that deeper mysterious realm. In five years, in 10 years, in 20, 30, 40—I just want to be doing that still.”