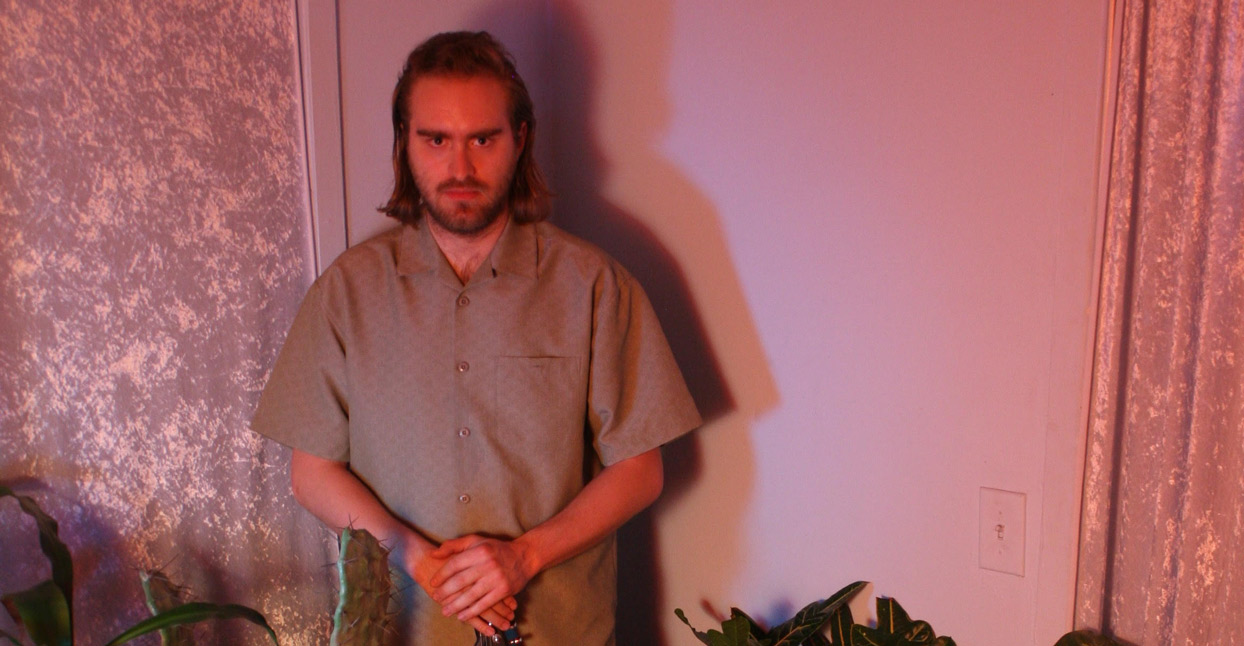 The first song Nicholas Benedek ever released was a track called “That’s My Jam!”—a wonderful slab of throwback funk, the kind of song that summons images of summertime pool parties and choreographed dance routines. It features DaM-FunK, perhaps the pre-eminent modern-day purveyor of old-fashioned, top-down-cruisin’ California grooves. That last fact is significant: Benedek, an aspiring funk producer himself, managed to land an A-list collaborator and mentor for his first ever track.

On Bene’s World, Benedek’s second release with LEAVING Records, the producer steps beyond funk to blend elements of house, rap, electronic minimalism, and pop into his sound. Still, despite the broader sound, Benedek’s eyes are focused squarely on the groove, and the songs on Bene’s World are refracted through this lens. The album manages to expand outwards while still retaining its funky structure. We spoke with the L.A. native over the phone from his home in Highland Park to discuss G-funk, his departure and return to his hometown, and the evolution of Top 40 radio.

When did you first get into music production and songwriting?

I got into music when I was around nine; I started playing the guitar. My parents wanted me to play music and they had me pick an instrument. I told them I wanted to play the synthesizer, but there’s no entry-level for that. That instrument wasn’t quite as easy to pick up as it is now, so they bought me a guitar. I got super into it and I really started taking it seriously when I was a teenager. From there, I started trying to record music—around high school. I recorded jams while messing around with drum machines and synths.

Is that how you got into funk?

Yeah. I always gravitated towards funk and synthesizer-based sounds. Some of the first music I really liked was West Coast rap. I was into the rap, but I was more into the production of it—the squiggly lead sounds and the bass lines. I loved the whole vibe of it, but I didn’t really understand or grasp the culture of it. I was still a little kid. When I got older, I started discovering that some of this music was sampled—either remakes of older songs or straight samples. I connected the dots between rap and the live music I was into. I started discovering my dad’s record collection and started getting into jazz guitar. There are a few Herbie Hancock records that really blew my mind. They filled in a gap of what I was aware of musically. The funky electronic music, it sounded like things I had heard as a kid but I didn’t know what it was.

Growing up in the early ‘90s we got a dose of this certain type of sound from whatever might have been on the radio or MTV. It was this ‘new jack swing’ and funk stuff that changed the way I heard music.

Who were some of your favorite rap producers growing up?

I was into Dr. Dre, of course. But once I started becoming aware of who was behind the tracks, and that there was more behind the music—when you think of West Coast rap and G-Funk you think of Dr. Dre—you discover those other people. I love DJ Quik and Battlecat, they’re behind some of my favorite songs that I grew up on.

You put out a record in 2013 called Test Pressing that you just put up on Bandcamp. What’s the story behind that record?

It’s actually called Untitled, but that’s kind of unclear when you look for it. I wanted to put out a bunch of tracks that I had. PPU [Peoples Potential Unlimited] does a few of these collected records, they did one with Moon B—it was his debut as well. They did one for Trash Company, too. Andrew [Morgan, label founder] has done a few of these test pressings to debut a new artist on the label. Mine was the second one after Moon B.

It came out in the fall of 2013 and people seemed to really dig it. It was cool for me, I was just humbled to put out a record on my favorite label. It’s cool to be a part of that legacy because most of the music on PPU is from older dudes who made this stuff in the ‘70s, ‘80s, and ‘90s. It’s a cool outlet for them to have this music they made in their bedroom or for their own pleasure in the world. For me to be a part of that is pretty cool. It came out in 2013 and I finally put it out on Bandcamp in early 2017.

Do you consider that your debut?

Pretty much. Before that, the only thing I really put out was a 45 with DaM-FunK on vocals. That collaboration came out in 2011. The song we did is called ‘That’s My Jam’ and I actually made that song when I was 18. I was living in New York at the time and I sent it over to [DaM] and he laid some vocals over it. We weren’t actually in the same room to create it, but that was my first release.

What’s it like having your first record be a track that DaM-FunK was on?

It was really dope. I met DaM early on, when his stuff first started coming out. I met him in 2007 or 2008. I was just a young kid and I gave him a demo of mine and he was into it. I had been making funk in some form since high school. For me to see him coming up was pretty cool. At that point there wasn’t a ton of stuff in that style of music. There weren’t too many other artists coming out with raw, funky, fluid sounds. It was dope for me. It would have been cooler if we could have gotten in the studio together, but the label I was working with at the time took care of it and they recorded him.

What brought you out to New York and then back to L.A.?

I was there for school. I did love New York—I have family out there, my dad’s from Long Island. I have some roots there, but it always felt like a second home for me. It was great to be out there for a few years, but I knew I wanted to come back here [to L.A.]. Once I moved back, things got rolling for me musically. I started working for a friend of mine, Tom Noble, who’s a record dealer; I got to hang out in his record store. Through him I got in touch with Andrew from PPU. I also got to put a record out on Tom’s label called Superior Elevation Records.

It still seems like there aren’t too many younger musicians making funk music. Have you ever been concerned about being pegged as a revivalist or a niche artist?

I just always believed in it. I just love that sound so much; even though I’d say my music is no longer strictly funk—it’s a hybrid of different things: jazz, funk, and a lot of this record is indebted to house music. It’s crazy to me how when I was back in high school, I never could have imagined a track at the top of the Top 40 from Bruno Mars sounding like The Time or something like that. That’s just how trends work. Ten years ago, it would have seemed strange because I feel like people weren’t ready for that sound. There’s been a resurgence of certain types of melodies and harmonies in music. When I was in high school the R&B in the Top 40 was really minimal, weird, and Middle Eastern almost. It was a totally different style. Now stuff is a little bit more melodic. It’s just a very different landscape of pop music.

As far as underground music goes, I think it’s a better time than ever. There are so many lanes people can be in and anyone can be a part of it and post their music.

Especially for someone like you, your music plays with so many different genres. Is that a product of this new landscape where everything is available?

I definitely like records that aren’t just one tempo. With an LP, it depends on the project, but I like to explore different styles and stick to the sound palette I’m feeling while feeling out different ideas. I definitely don’t have a conscious idea of what styles I’m gonna play with. This record is definitely more uptempo than my earlier work though. But that never crossed my mind until the record was actually finished.

Being from L.A. and currently residing there, was it important for you to put out the album on a label like LEAVING Records that really reps the city?

It’s so dope for me. I’ve respected LEAVING for a long time. They’re a part of the Stones Throw family, one of my favorite labels since I was a kid. Matthew[david, LEAVING founder] and I had been talking about doing a record for a few years now and it just took a while for this record to materialize. It’s actually been done for almost two years, but things come up and things take time. I’m really, really happy to finally get it out there and have people listen to it.

It’s really cool to have a label based in L.A. and one that has such a strong foundation in the city. The other labels I’ve worked with have all been based elsewhere, so it’s cool to have that strong community behind me.

Have you been making new music in the two years between Bene’s World being finished and it finally coming out?

Some of the tracks on the [latest] album are newer, but for the most part they’ve been sitting around for a while, so it feels really good to get them out. I’ve been working on a lot of new stuff, nothing I can really talk about yet, but just a bunch of ideas.

Do you have a favorite way to compose music?

Most of my music is created on synthesizers and drum machines with outboard effects. That’s the main foundation of it, but I’ll do stuff in the box sometimes. Usually, you won’t be able to tell what’s what. I used to do a lot of stuff off of cassettes, but I’ve been using Ableton a lot recently. It feels like a nice visual palette. Sometimes, though, the visual palette gets a little constricting. It’s really nice to get out of the box and just play music.

Lately I’ve just been trying to play—not so much on the MIDI stuff and not using sequencers. I’ve been really into long takes. I’ve used the MPC a lot, but I’m really feeling the live direction now to capture that energy.