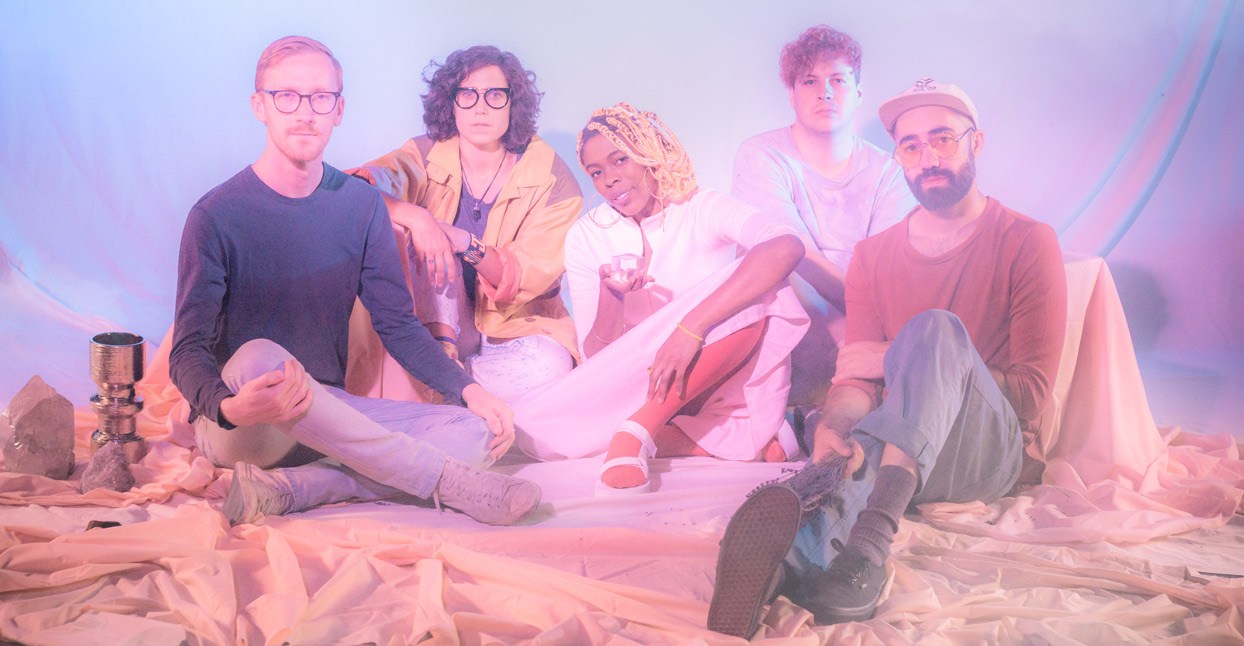 Over the course of their six-year career, the Oakland group Bells Atlas have pursued two paths: the mastery of musical forms, and an exploration of how to break those forms down. Their 2013 self-titled debut offers a nuanced take on the “Afro-pop plus indie rock” formula that was popular among Bay Area peers like Trails & Ways and Waterstrider. Yet on the singles and EPs that followed, the group began dissolving conventional song structures, favoring wider soundscapes and off-kilter arrangements. “Bling,” from the 2015 Hyperlust EP, leaps daringly from passage to passage; “NCAT” from the Be Brave EP has a propulsive bassline that could go toe-to-toe with any DJ Mustard banger; “Be Brave” rides a churning, hypnotic groove. Their latest LP, the mystic, pushes that drive to deconstruct even further. The album pulls from a mix of contemporary R&B, jazz, and indie rock without really sounding like any of them; instead, it blurs those influences together to create a collage that is hallucinatory and sumptuous, hectic and dense.

That kaleidoscopic approach is, in part, a reflection of the group’s vast range of side projects: guitarist Derek Barber has released two albums of razor-edged indie rock as Perhapsy, and has previously collaborated with Madeline Kenney, indie stalwart John Vanderslice, and Curls (formerly known as Girls). Both Barber and bassist Doug Stuart joined the touring band of the heady soft-rock ensemble Astronauts, etc., while Stuart released an EP of delightfully hazy pop as Jinn Grin, produced several tracks on the latest Jay Stone record, and records and tours with Meernaa. Percussionist Geneva Harrison has collaborated with artists including Dirty Snacks Ensemble, Trivial Shields, choreographer Sonya Tayeh, composers The Bengsons, and Jordan Glenn’s Beak. Keyboardist Steve Blum, who joined the band two years ago, as released several records under his own name, and vocalist Sandra Lawson-Ndu is prepping for an upcoming collaboration with the Bay Area choreographer Larry Laura Arrington and a solo project titled chew fufu.

The group was also enlisted as the live band for the touring version of the popular podcast Snap Judgement. Each segment of the live show features a different storyteller, with Bells Atlas providing original music to accompany their stories. “It’s almost like having an extra band member,” Lawson-Ndu says. “It makes us create faster. There’s less belaboring new ideas, we got better at knowing what we want to work with.”

That sense of immediacy extended to writing sessions for the mystic, resulting in some of Bells Atlas’ most visceral and kinetic songwriting to date. “We’d have [the recording software] Logic open and record ideas right away. A lot of those first ideas stuck,” Lawson-Ndu says. Many of the songs grew out of a bank of raw drum recordings Harrison had previously made on her phone. Although she later played over them, some of those gritty, blown-out recordings are still buried in the final mixes, adding a vivid texture that’s echoed by the other instruments, from the punchy bass on opener “Hazelwood” to the shrieking guitars on “Rogue Dream” and Steve Blum’s glitchy synth riffs in lead single “Belly.” Lawson-Ndu’s vocals are equally impressionistic. “It wasn’t about singing in a pretty way. It was about embodying a feeling in my voice, moments like in ‘Downpour,’” she says.

Employing a wide array of colorful sounds, the mystic recalls the lurching worlds of Mission of Burma as much as the disorienting, psychedelic R&B of Solange’s When I Get Home. Its dizzying soundscapes are crucial to the album’s lyrical themes: much of the mystic is an exploration of the ways we relate to individuals who see the world differently than we do. In conversation, Lawson-Ndu refers frequently to a person close to her who introduced her to mysticism, sci-fi, fantasy, and spirituality in her youth. This person was eventually diagnosed as having a range of mental health conditions, throwing their spirituality into a new context for Lawson-Ndu. That experience inspired some of the album’s lyrics, which consider the validity of different realities. “Even if I don’t believe in [some of] those things, I feel open to them,” Lawson-Ndu says. “It can be magical to think about the ‘what if’s.”

Throughout the mystic, Lawson-Ndu explores the cultural questions surrounding mental health through the lens of sci-fi and fantasy. That filter was inspired in part by an increase in the number of high-profile science-fiction projects helmed by people of color. “I never imagined myself in stories as a kid,” Lawson-Ndu, who is Nigerian-American, says. “I imagined myself as an outsider. When there’s no representation of yourself, the way you create that world is different. For some people, [sci-fi and fantasy] are the best ways to see the world. They are entertainment, but also an opportunity to imagine solutions.”

Solutions—and moments of deep compassion—abound in the mystic, but they are often conveyed using abstract imagery. In “First Gen Pisces,” for instance, Lawson-Ndu reflects on the soothing nature of sleep, but describes it using phrases like, “Disco witch hunt playing with my soul.” Later, the title track explores universal elements of prayer. “I was thinking of Mecca, seeing all these people pray and give intentions out. How do we pray?” she asks. On “Rogue Dream,” Lawson-Ndu discusses the feeling of defeat. “Sometimes you get knocked down when you don’t have tools to help people you love—that’s the rogue dream,” she says. “It’s not always in your hands.” That tension takes on mystical form in the song’s lyrics, which use “spaceships getting me high” and “cloud dreams” to cloak frustration in mystery.

In the end, the mystic encourages listeners to be open to the viewpoints of others; it doesn’t seek to evangelize. Driven by some of Bells Atlas’ most nuanced and dazzling music to date, It doesn’t just open a door to a conversation rarely addressed in pop music—it creates a world unto itself.