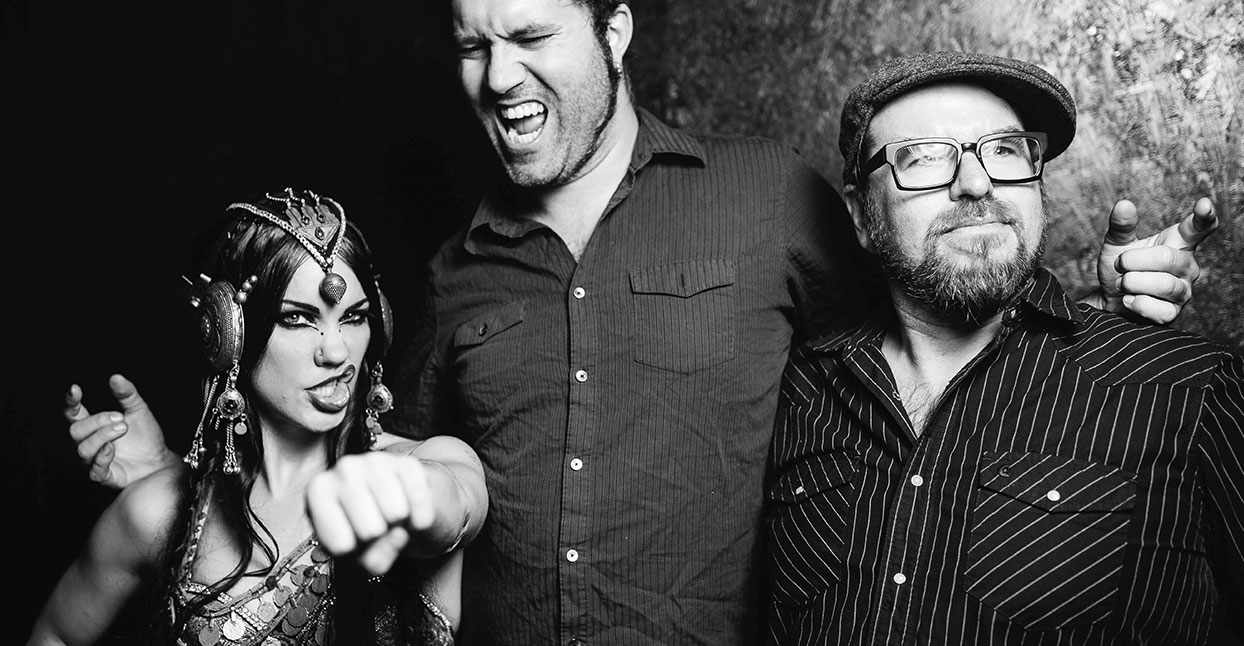 For over a decade, the Bay Area trio Beats Antique has remained committed to the concept implicit in their name. Their compositions consistently blend a dazzling mix of far-flung styles—often from eras long past—with inventive, danceable grooves. Shadowbox, their 10th album, further highlights their adventurous spirit through a series of ambitious collaborations the group recorded across the globe: from Moscow to Tel Aviv, London to New Orleans. As a result, the album often feels like a celebration of the places that inspired it.

Meeting up in their cavernous and chaotic studio just two days before striking out on an extensive US tour, the group’s David Satori and “Sidecar” Tommy Cappel seemed unfazed by both their impending departure and the tremendous pile of gear surrounding them. In their dimly-lit mixing room, adjacent to the retail store they just opened, which is also called Shadowbox, Satori and Cappel shed some light on the album’s collaborations, the philosophy underlying their global approach, and the significance of the shadow box itself.

When you began making Shadowbox, were you already planning on recording in all these different cities?

Cappel: No. We just went through a phase when we were on tour where we’d meet somebody and have a couple free days, and we’d say, ‘Let’s record something.’

Satori: We weren’t trying to get too conceptual. We did that with the past two albums—tried to get really conceptual. [On Shadowbox, we were asking ourselves] ‘What songs are gravitating towards us right now? Let’s get them together and put them in a little box’ [laughs]. We were playing with that idea on the album cover, too. That’s a shadow box; it’s the sculpture that Zoe [Jakes, the group’s third member] performs with in the live show. An artist named Hybycozo made it [along with the lanterns that are part of the live show]—they are shadow boxes too.

Can you tell me about how you connected with some of the collaborators featured on the album?

Satori: In Russia, we were having dinner with this promoter Mel, who took us to his apartment and started making us a traditional Russian dinner with cabbage and beef and beets. They were playing music, and it was this amazing singer, so we asked. ‘Who is that?’ They told us, ‘That’s our good friend Tatyana [Kalmykova].’ ‘Oh, can we meet her?’ He got on the phone and called her. We ended up recording with her. It was the middle of December in Moscow at night. We took a van into the outskirts of the city, into this industrial area, with giant power plants and giant tubes everywhere, [thinking] ‘Where the hell are we?’

It sounds like the opening scene of a James Bond movie!

Cappel: Exactly, it totally was.

Cappel: Then, you get through the security, and there’s this sweet little studio.

Satori: All these baller Russian Hare Krishna guys owned this million-dollar studio. It was super nice equipment, really nice rooms. [We asked Tatyana], ‘Hey do you have a song we can record to a click track?’ She played fiddle and sang; we just gave her a beat. Then we cut that up and made the song.

Then we did same thing in Israel with these amazing traditional musicians from Lebanon and all around the Middle East. We did a bunch of experiments and multi-tracking. We took some of that sample and made a new track, then got [Dana Likvornik], another singer from Israel, to record over that. It was this back and forth—a  nice multicultural exchange.

Did you already know those musicians?

Cappel: We were introduced to them through a promoter who does production and TV stuff there. We went into the studio just to mess around and have fun. Then [Likvornik] invited her band. It was awesome.

Satori: With that song, [“Le Refuge”], we are going to try to raise money for Syrian refugees. It’s a song about asking for peace, sung half in French and half in Arabic.

Both Russia and Israel are in the news these days, for less than positive reasons. Did you feel like there was a political or social element to those songs, simply by virtue of the fact that you were recording there?

Satori: Definitely. We want to be cultural ambassadors and show that people are people everywhere. Some people were mad: ‘Why are you going to Israel? You should boycott Israel.’ But it’s a place with a lot of turmoil where people need some love and positivity right now. We’re not taking any sides. We’re not for the Israeli government. We’re not for suicide bombers from Palestine, either. We’re not condoning violence.

Cappel: The only way you’re going to understand something is if you go and talk to the people who live there. Because of what we do, when we go to town, we play in some cool spot, and that’s a great way to find out what’s going on instead of watching the news and hearing someone’s biased opinion about what the situation is. You just go there and meet people who are nice. In Russia, I got to know some people in the community there, and they’re exactly the same as us.

Satori: I think it’s just not assuming countries are represented by their governments. One of my goals in life is to be an advocate—a positive force from the U.S., instead of [being seen as] someone who just bombed your country or is boycotting your shit. Hopefully, we’re building bridges through music. We love traditions from all over the world. Hopefully, people will hear this song by Tatyana [“Three Sisters”], a Russian folk song, and fall in love with the side of Russia that isn’t in the media.

Looking a little bit closer to home: let’s talk about your collaboration with the Preservation Hall Jazz Band. Who brought what to the table with that one?

Satori: We’re honored to be collaborating with them. Ben Jaffe [the current director of PHJB] found us through Burning Man, and has been to our DJ sets out there. We got to actually play at Preservation Hall with them four years ago. Ever since then, we’ve been talking about collaborating and recording in New Orleans. That song was recorded in the [actual] Preservation Hall in the French Quarter, a block off Bourbon Street, right near the water. It’s one of the oldest buildings in the quarter. They’re preserving that vibe.

Cappel: We were looking for a chant-y kind of vibe, a call-and-response thing, shouting out in that New Orleans style. It was super fun to take an idea, a sketch, and turn it into a thing with those guys. It’s a super high-energy track. It’s a different sound for us, too. It’s exciting to do, working with that caliber of passionate vocalists. They did a bunch of takes, a bunch of crazy stuff. We had like 16 tracks of vocals between two dudes. We created that thing in a day. It was the night before our album was due; we kind of slipped it in at the last minute. It’s funny, because the lyrics are ‘let it all go.’ I needed to hear that. It was the final push of recording the album, when we were just monsters.

What’s the connection between the album and the new store?

Satori: We were inspired to open up the storefront right next to our studio, and it just happened to look like a shadow box from the outside. We wanted to have our album release and the opening of the store coincide. So we took the idea of shadow box and are running with it with both the store and the album, co-promoting them together.

Wait, did the idea for the album start with the store?

Satori: Yeah, we named an album after the store [laughs].

Cappel: The artists who helped create the store, they did such a kick ass job. [They were building the store] while we were writing the music, and [the store] just reminded us of what you’d hear in a shadow box: creepy sounds [which became] the sounds of the album. To me, the art in the store, the sound of the album, the way the store looks, the vibe in there—they all go together.

The record is coming out while we’re on the road, so we did a listening party/silent disco at the store. People had headphones, and we brought SubPac out—subwoofers you wear on your back—and we talked about each song.

That’s amazing. One last question for you: how does the notion of a shadow box turn up in the music?

Satori: I remember being younger and seeing a shadow box—a little box with little figures in it, sort of this magical space that lets your imagination into nooks and crannies. There was a little bone and a key and some funky little things in it. That just fits with Beats Antique’s aesthetic, and our whole vibe of letting your imagination run wild within this little environment.

Cappel: For me, it’s a place for a story to be told. You go into it knowing that you’re going to be told a story, and go on a journey.