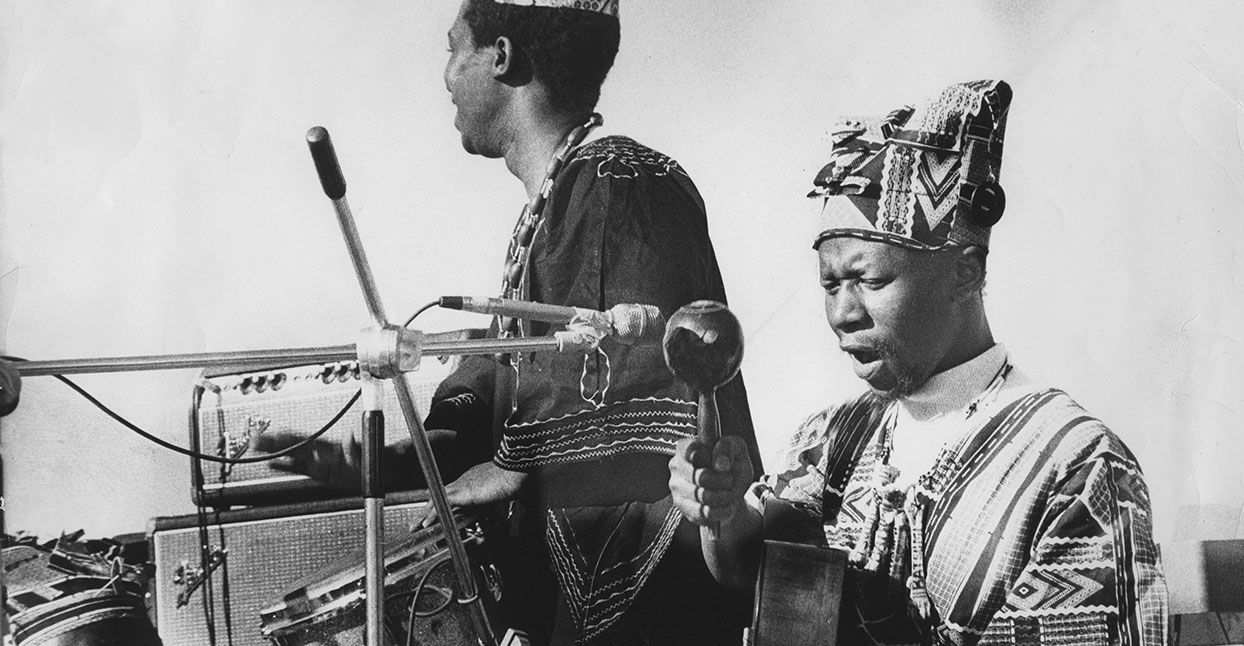 During the brutal era in South African history known as Apartheid, the minority-white ruling party forcibly moved millions of black South Africans from their homes to segregated areas, stripping them of their citizenship and reassigning them to tribal Bantu status. But even in the face of this outrageous oppression, South African music thrived. Artists like pianist Abdullah Ibrahim (formerly known as Dollar Brand), and multi-instrumentalist Hugh Masekela gained fame both within the country and beyond. But Ibrahim and Masekela were the exceptions, rather than the rule. Because they both lived and toured abroad, it was easier for their music to get attention. For local South African musicians, operating under the threat of state violence, breaking through to European and American audiences was much harder.

From this difficult environment came the self-titled debut from Soweto band Batsumi, one of the region’s most unusual and lush jazz albums. First reissued by UK/South African label Matsuli in 2011, and recently re-pressed on clear vinyl, Batsumi sits alongside the Asiko Rock Group’s album and Mor Thiam’s Drums of Fire as true crate-digger classics—exceptionally rare albums that far exceed the hype generated by their scarcity. Batsumi was inspired by the Black Consciousness Movement of the late 1960s, which was led by anti-Apartheid activist Steve Biko, whose writings and famous slogan “Black is Beautiful” sought to empower black South Africans. The movement was an assertion of pride, and Batsumi’s raw, indigenous jazz is filled with the same sense of serene self-love that Biko preached.

By the early 1970s, the two major anti-Apartheid parties—the Pan Africanist Congress and the African National Congress—had been outlawed by the ruling National Party, and were operating underground. Batsumi leader and guitarist Johnny Mothopeng’s father had been the president of the Pan Africanist Congress and was subsequently imprisoned. The younger Mothopeng saw Black Consciousness as a way to “keep the fires burning.” That heat and resilience can be heard throughout Batsumi.

Batsumi was released in 1974 on the Records & Tapes imprint, a subsidiary of Satbel. Yet in an all-too-familiar pattern, Records & Tapes—a white-owned company—paid the band next-to-nothing, and barely promoted the album. Still, Batsumi was incredibly popular on tour, and for years played to large crowds at festivals and stadiums across South Africa. Batsumi doesn’t sound like afro-spiritual jazz in the vein of Alice Coltrane or Pharoah Sanders. Instead, it’s more beguiling and weightless; its five tracks flow seamlessly—blending flutes, saxophones, winding bass and soulful vocals into a gorgeous suite of nuanced melody. Most of the band couldn’t read or write sheet music, and learned to play by ear instead. Their saxophone player, Themba Koyana, listened to jazz legend Charlie “Bird” Parker until he sounded just like him. Throughout the album, the band sounds equally relaxed and intense, as if they knew their music meant a great deal to the community it served. On “Lishonile” and “Anishilabi,” in particular, Batsumi is both free and electrifying.

According to Mothopeng, the studio sessions were brisk, moving quickly from one track to the next. The band rehearsed and memorized the core melodies of each song, then stretched them out and let them wander during the recording sessions. On the album’s longest tracks, “Lishonile” and “Itumeleng,” the group launches into propulsive blasts before settling into expansive grooves, allowing the wind instruments to hover around the bass and drums before vocal chants arise. “Emampondweni” and “Mamshanyana” are loose and floral, recalling some of the more swinging sides of the Canterbury scene and Sly Stone’s freewheeling cuts on his Stone Flower label. The final track—the radiant “Anishilabi”—feels especially remarkable: a joyous clarion call of courage.

Perhaps the most unique element of Batsumi is the way it blends jazz and South African indigenous folk music. The vocals are in Zulu, Xhosa, Sotho and Shangaan, and the lyrics cover a broad range of topics: heroes (“Moshanyana”), ancestry (“Empondoweni”), and providing for one’s family (“Itumeleng”). Unlike their contemporaries Dashiki Poets—who also made indigenous jazz, but wrote more explicitly political lyrics—Batsumi are less didactic. Their music is still political, but it uses poetry and grace to achieve its rhetorical goals rather than anthem and slogan. For Mothopeng and the other members, singing unapologetically in native languages while fusing indigenous folk music and jazz was inherently political, a musical confirmation of dignity. Twenty years after the fall of Apartheid, Batsumi remains sublime and transformative, and its resonance hasn’t faded at all over the years.