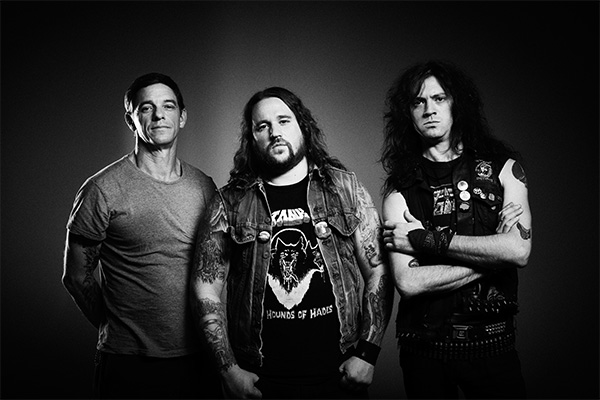 “It’s hard to take it easy when you’re trapped on boat, at sea, with 24-hour bars.”
—Ryan Waste

Richmond, Virginia has been home to some of the more aggressive—but also some of the most jovial and convivial—heavy music that America has ever seen. Ryan Waste has been a huge part of the scene for more than 15 years now, banging out power chords as the frontman of Municipal Waste, among other projects. His new band, BAT, is something of a metal supergroup, adding straightforward, old-time heavy metal to Richmond’s already-varied loud landscape. On BAT, Waste teamed up with Felix Griffin (drums) of Blunt Force Trauma and Condemned Unit (and formerly the influential hardcore band D.R.I.) as well as Nick Poulos (guitar) of Parasytic and Volture (and formerly such massive acts as Battlemaster, Organ Donor and Cannabis Corpse), giving BAT both the chops and the commitment required to make musical waves.

Their Debut LP, Wings of Chains, is a mix of niche subgenre styles built on a traditional heavy metal foundation. Plenty of D.R.I.—style crossover thrash influences can be found, but so can nods to standard-bearers like Venom, Motörhead and Witchgrave. It’s fitting that Wings of Chains is being released in the summer; it’s the perfect fun-under-the-sun style of heavy to blast from your beach cruiser, soundtrack your backyard barbecue, or complement a good late-night porch hang with a few cold ones.

We chatted with Waste about the project, as well as growing up a teen metalhead, touring via cruise ship, his YouTube interview series, metal crate-digging, and BAT’s preferred adult beverages.

First off, I want to chat about the Richmond heavy music scene. At first blush, it seems really non-cohesive. You’ve got your other band, Municipal Waste, you’ve got the artistic antics of GWAR and you’ve got the commercial-leaning Lamb of God. It seems like the scene is one of the broadest and most all-encompassing in the country. Where do you see BAT fitting in?

There’s been a warm response to BAT in Richmond, considering only two-thirds of the band live here. With our drummer Felix in Texas, it’s hard to claim ourselves as a local band anywhere. I kind of like that element, though, because it creates a special occasion whenever we do play in town.

What was it like growing up in the shadow of that scene? Were you the only metalhead in your school?

I grew up in Virginia Beach, and I was one of three kids with Slayer t-shirts in our Junior High school. [The three of us] were referred to as “grits,” and we wore that label with pride. The other two guys were brothers, and had a pretty damn good metal band, considering their young age. It was them who got me interested in playing music. The older brother was a guitarist, and the younger one played drums. They kicked out their bassist, so naturally I said I would fill in. Of course, I had no idea how to play, and they said if I could learn the bass parts to “Orion” by Metallica, I would have the gig. That was a tall order, and probably an inside joke of theirs, but it got me playing music and striving towards something, even though I never joined the band. We still hung out, drank, smoked weed, listened to cassettes obsessively and made compilation tapes for each other. That’s when I really started digging deep and learning about more obscure heavy metal.

I’d love to hear about the first show or musical experience that you really enjoyed.

I started going to DIY shows in my early teens, but we had to go to Norfolk to see those type of gigs. I think seeing that early hardcore ethic had an effect on me, because I was one of the only long-haired metalheads at those shows, but somehow I was accepted. I was drinking way underage then, and that probably could’ve gotten the shows shut down, now that I look back on it. Just seeing people putting on their own shows in a basement gave me a whole other perspective outside of the traditional type of ‘concert’ I had been to before. That was life changing.

It’s no secret that you guys are hilarious, so I’d love to get some tour stories. How has touring slowed down now that you’re a little older? Any concern about the lack of healthcare or sustaining injuries on tour? Maybe you drive the vans a little slower?

I’m 36, and I’ve been touring hard since I was 19. I haven’t slowed down yet. I’ve woken up outside in the rain behind squats in Germany, gotten in street fights in Spain and time-traveled drunkenly all across the land. I’ve done it the whole time without health insurance, too. I’ve learned to get hurt in Europe, because they don’t really charge or know how to find me if they do.

What’s the preferred adult beverage for BAT? Beer is pretty much the official beverage of heavy metal but, anything else you guys enjoy?

Nick and I are big fans of dry cider, like Magners or Crispin Browns Lane. For beer, I always enjoy a good, cheap Mexican one like Tecate or Modelo and a shot of blanco tequila. Felix is on the road to recovery and has put the drinking behind him. We’re proud of him, and having a sober drummer is never a bad thing.

I heard that you once did a cruise ship tour, back in 2012. What in the hell was that experience like?

Ahh yes, I’ve done three: Close-Up Boat, Barge to Hell and 70K Tons of Metal. Total debauchery on the seas, a real heavy metal vomit party. They’re a good time if you pace yourself, but believe me, it’s hard to take it easy when you’re trapped on boat, at sea, with 24-hour bars.

That something you want to do with BAT?

I would take BAT aboard for sure.

Before we finish, I want to talk about the YouTube heavy metal interview series you hosted called ‘Living Fast.’ First off, it seems like you put a ton of work into that thing. Why did it end?

Living Fast did not end. I actually have an interview with Riot from one of those metal cruises mentioned above. It’s just very time-consuming putting the episodes together. But, fear not, it’s still happening. I’ve just been touring, writing and recording non-stop so the latest episode has been put on hold.

I noticed you have comments disabled on the YouTube channel, is that some sort of comment on the internet?

I disabled comments from the get-go because those things turn into shit shows, and I don’t have time for that. Someone told me having a comment section boosts your views, but I don’t care. Come talk to me in real life.

How do you balance writing about music and playing music? Any fear criticizing bands at all? I know a bunch of writers who play music and they’re terrified of criticizing other bands, lest the same fate befall them.

I assume you mean my column in Iron Fist Magazine, also entitled Living Fast. That’s just an extension of the show, and the hardest part is being able to pick my own topic each issue. It feels like homework at times. But I do it for the love of heavy metal, and the respect of my friends’ magazine. I usually write about older bands that I dig, and I don’t trash on anything. It’s a waste of time focusing on the negative. If I wrote reviews, that might be a different story, but I’ve never been interested in doing them. I think it’s better to turn people on to the stuff I like.

Do you ever read comments and reviews about BAT?

I read reviews here and there. I maintain an admin for all my bands, but I’m not overly active on the internet.

OK, on to records: I hear that you’re quite the vinyl aficionado. What’s your favorite album that you have in your collection?

Flipping through records is therapeutic for me. I also DJ from time to time, and that’s been my way of sharing my collection with others and keeping the flow. I have an endless playlist in my life, and it never gets old. I don’t have one favorite record, but I can name a few that are in constant rotation. Wolf Edge of the World, Gotham City Black Writs, Cacumen Bad Widow, Leather Nunn Take the Night, ATC Cut in Ice and Ashbury Endless Skies. For non-heavy metal stuff, lately I’ve been jamming a lot of early The Cure—Seventeen Seconds is a killer. I’ve always been a fan of AOR and soundtracks, too. Most of the time I just cruise around and pretend I’m in a John Carpenter movie.

Any crazy plans for physical pressings on the Bat LP?

The new BAT album, Wings of Chains, will be pressed on black, white and clear 12” vinyl, as well as a picture disc which is limited to 111 copies.

You have a nearly encyclopedic knowledge of metal—does that pose a problem when you’re writing and you hear a riff and it reminds you too much of something else?

Heavy metal is timeless. A Black Sabbath or Judas Priest riff will still crush skulls to this day. That’s why they’re imitated so much. The key is building onto it, making it your own and carrying on the spirit.

Finally—plenty of people are out there saying Metal is dead, can you please give us a few reasons why Metal is alive and well?

I see more and more young kids getting into the right tunes these days, and that’s a surefire sign that heavy metal is far from dead. With proper festivals popping up in the States and continuing on in Europe, older bands reuniting and realizing they have an audience. It’s a very exciting time for metal.