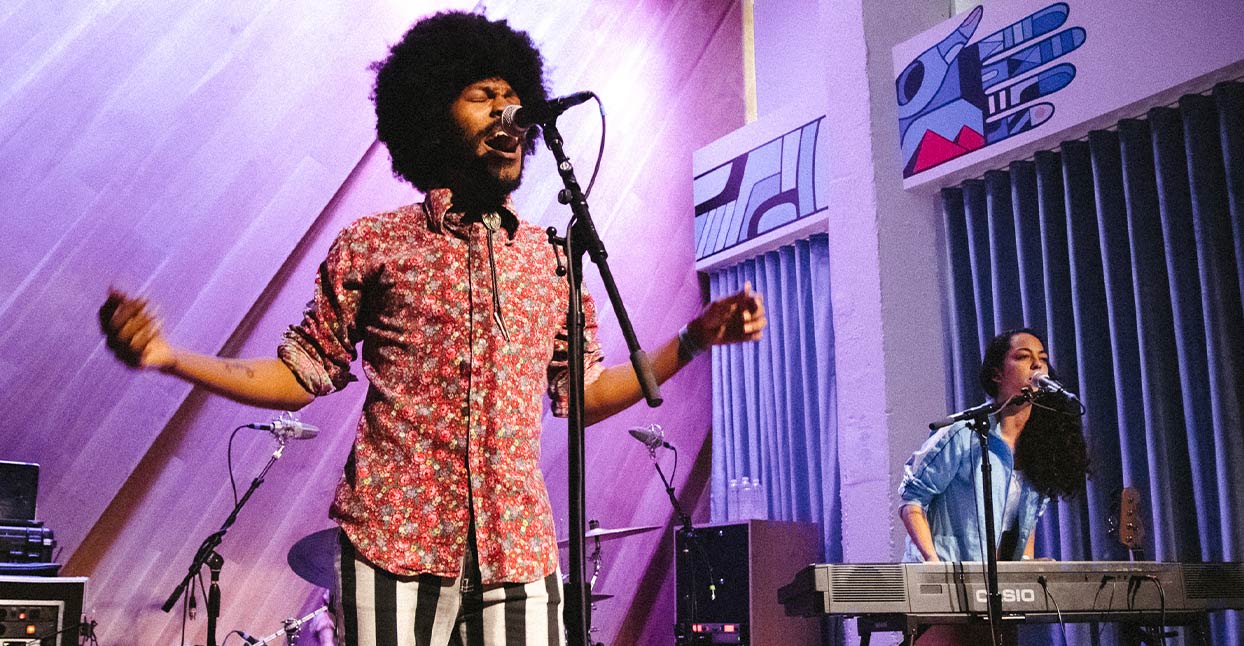 In August of 2017, in response to the Trump administration’s proposal to ban transgender servicemen and women from the U.S. military, Bandcamp held a fundraiser to raise money for the Oakland-based Transgender Law Center. The relationship between Bandcamp and the TLC continued Friday night with an event called The Sound of Visibility, featuring performances by the local artists Rituals of Mine, MaHaWam, Wizard Apprentice, Piano Rain, and DJ Doll, to raise money for the organization and awareness of the daily struggles of trans people across the United States.

“There has always been an intersection of cultural work, art, and movement work and organizing and activism,” said TLC Executive Director Kris Hayashi. “The beauty of an event like this is that it’s bringing them all together. I think that there’s a way in which this can expand, as there may be some artists and cultural workers who are here who are new to the trans movement and trans organizing. My hope would also be that there’s a way in which we inform the art and cultural workers, and vice-versa.”

The music on Friday all had roots in hip-hop and R&B, but expanded outward, pulling in the heat-warped futurism of experimental electronic music and the moody atmospheres of goth and darkwave. The performance by Wizard Apprentice, the project of Oakland artist Tieraney Carter, was broken up by spoken interludes delivered by warring digital avatars of Carter, projected on a screen to the left of her. They seemed to reflect Carter’s own warring internal monologue. One of them, reclining in a field of neon-colored flowers, was gregarious and engaging; the other, with blacked-out eyes and what looked like a bird’s beak plunged into its head, was snide and belittling, seeking to undercut Carter’s confidence with a string of stinging insults. Her music, which documented the dissolution of an abusive relationship, was harrowing and percussive, Carter laying hypnotic R&B vocal melodies over icy electronic production.

MaHaWam’s set radiated a sense of almost defiant joy; nimbly switching his cadence from rapid-fire rapping to lithe, rapturous soul melodies, MaHaWam staked out ground between booming, body-pummelling drums and darting keys. Scattered moments courted the spiritual energy of deep house music, with its bright synths and soaring vocals; others fell closer to the wooziness of trap music, MaHaWam’s agile voice skipping across the slow-motion drums. And Rituals of Mine delivered a set that could best be described as “Industrial Strength Aaliyah.” Frontwoman Terra Lopez is a full-body performer, accentuating syllables with prizefighter-like jabs to the air, throwing herself forward during extended vocal runs and pacing the stage with frantic determination. Their songs blend robust soul melodies with pulverizing beats, and the gauzy layers of electronic often took on a dark, goth-y hue.

The show also featured a short message from Hayashi, who told the story of a trans woman named Roxanna Hernandez, who fled persecution in Honduras only to die in an ICE detention center in the United States. The Transgender Law Center is in the process of advancing a wrongful death suit on her behalf. “Over the last few years, we’ve seen this government attack so many different people so many different communities,” said Hayashi. “What that has looked like for trans and gender non-conforming people is an ongoing, relentless, and strategic attempt to roll back the few rights and protections that we have—to eliminate life-saving measures, and ultimately to deny our very existence and our humanity.”

It was that spirit of defiant optimism that defined the evening—a recognition that the world is dark coupled with a commitment to joining together in the fight against that oppression. “My best friend is trans, and I see what he goes through on a day to day basis,” said Lopez. “I’m a queer brown woman, and I definitely feel some of that in my own day-to-day. I just think it’s crucial to use any platform we have as a way to support any marginalized group. It’s important that we show the trans community that we’re there for them at a time when they may not hear that as often as they need to.”