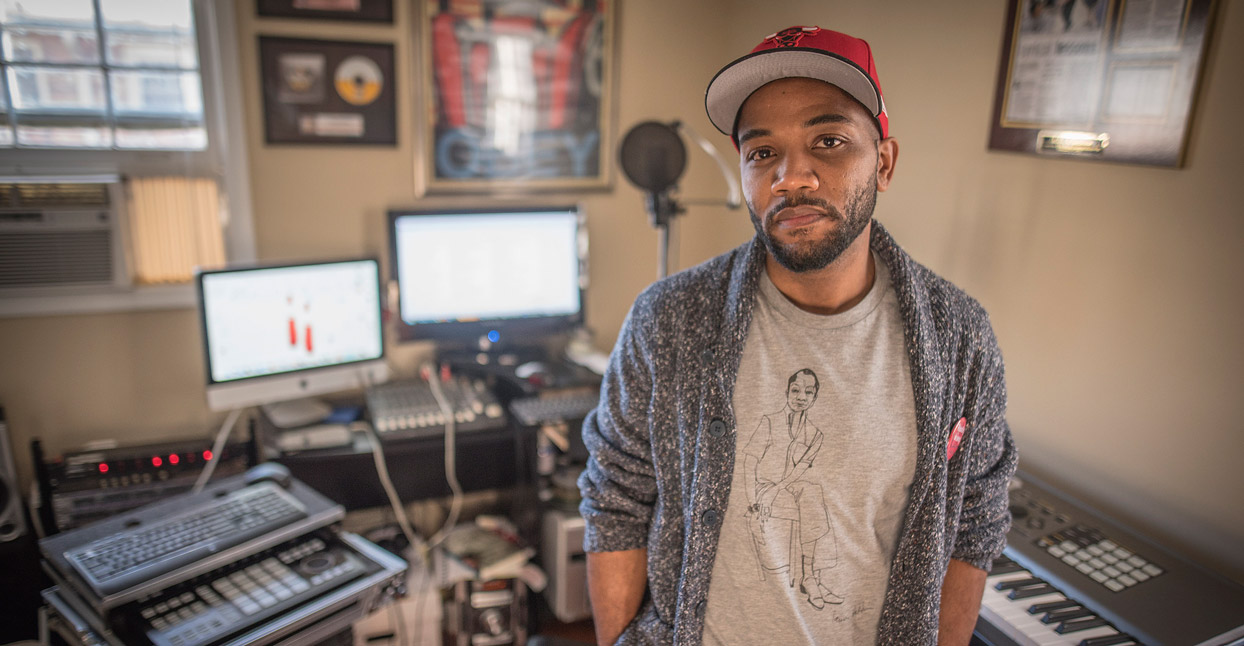 By day, A.D. Carson is a doctoral student at Clemson University in South Carolina. By night, he’s Aydee the Great, a rapper whose new project, Owning My Masters: The Rhetoric of Rhymes and Revolutions, doubles as his dissertation. On his impressive 34-track release, Carson dissects black history, using jazz and trap-influenced beats to address issues related to people of color. Clemson University is built on what used to be a slave plantation and its officials—according to Carson—don’t want to engage with those events. Carson urges black influencers to reclaim their rightful places as leaders of hip-hop culture.

Projects like Carson’s are important because they retain the language of classic hip-hop culture in the progressive modern age. Blending old and new styles of rap music, Carson preserves the essence of hip-hop as it continues to evolve. I spoke with the scholar/MC about his ambitious new project, the aesthetics of “mumble rap,” and why black people are essential to the genres they create.

What is your undergraduate and graduate background?

I went to Millikin University in Decatur, Illinois for my undergraduate degree in English secondary teaching and English writing. I did my masters degree at the University of Illinois-Springfield in English as well.

Owning My Masters is a truly ambitious project. What was the motivation behind what you created?

I had all kinds of different ideas about what I wanted to do. I knew it was going to be musical. I knew it was going to deal with hip-hop, and I knew it was going to deal with language. It wasn’t until I got to campus [at Clemson] and heard the silence around the landscape [that I decided what I wanted to do]. It was the silence, in particular, about Clemson being built on a plantation, and the plantation house being open seven days a week. As well, there’s this hill that the football players run down [before games at Memorial Stadium, aka “Death Valley”] for what they call ‘the most exciting 25 seconds in college football.’ At the top of that hill is where the house is. So I find it amazing to think about this in alignment with our issues with race in athletics, and the notion of unpaid ‘amateurism’ in the NCAA.

So that leads to questions about how the silence regarding Clemson’s history [with slavery] creates a cognitive dissonance about the things that are going on currently. At its best, hip-hop allows you to use a localized voice to frame issues on a regional, national, and global level. It wasn’t until I thought about what it meant to live in Clemson locally might mean, specifically in relation to historical and modern-day engagement with issues, that I realized what I should—and can—be writing about for critical study.

I feel we’re at a place where hip-hop has made a trip around the sun. What do you think about that idea? Why cast your album as a “reclamation” project, now that hip-hop is an international phenomenon?

I named the project Owning My Masters because I wanted it to work on a lot of levels. Particularly, the ownership of the music and the message, but also the academic institution, especially one on a former plantation. I wanted to study how we do things. It’s truly a reclamation project in that we have to very closely examine the language we accept about ourselves, as well as the language we deploy in describing the world in which we live. I’m very mindful of the history of the genre, the history of black intellectual engagement and knowledge production that precedes this particular project. The monuments along that particular road that lead up to this rap album-as-dissertation are undoubtedly important here. Hip-hop history, black history, and American history’s use of hip-hop history and black history influenced me for sure.

Sampling allows me to subvert the issue of how time and language interact, and how language and genre converge in the arena of academic engagement. When you’re writing an essay, it’s suggested to find your voice or to be in conversation with dialogue about an issue like gun violence, or the Second Amendment. In my mind, rather than a typical essay that quotes what Malcolm X says about starting rifle clubs, I’m just going to use a recording of Malcolm saying what he says, and just speak alongside that, so my creative ethos is situated somewhere in what he says.

For me, the way I went about choosing the samples on this album comes from actually reading a lot of James Baldwin and Malcolm X, and then thinking about the economic and sociopolitical aspects of issues that afflicted black and American communities in general—like the crack cocaine epidemic of the 1980s. It’s intriguing to hear what the news had to say about it, compared to what was written by thinkers about that, and living in the legacy of those words in 2017. I like to invite these voices and words explicitly into a cipher of sorts that I’m creating in 2017. Some of these voices may not be rapping, but their contribution to the culture should be allowed to generate a conversation that’s now happening worldwide.

Are black voices important to the future of hip-hop as a cultural form?

That question comes up often. Say a lot of people ask me, because of this project, ‘Where is the ‘good rap’ these days?’ I’m like, ‘It’s still here.’ There are commercial artists like J. Cole and Kendrick Lamar nodding in that classic, ‘good’ rap direction, and perhaps there’s something in what they’re doing that says the classic influence is part of the future of hip-hop culture as well. Word-crafting is part of this conversation as an influence, and is important for artists like Slaughterhouse. Those four emcees have a place in hip-hop’s current landscape. I don’t believe that’s a privileged place, but it’s still important and still resonates when people are introduced to their rhyming abilities. Artists like Scarface and numerous others who are “classically” gifted still release albums. There’s a space right now for artists like Joey Bada$$, who are inspired by these classic craftspeople. I’m hopeful this will continue to happen.

I’m kind of interested in the aesthetics of say, “mumble rap,” too. I’m interested in what a Royce da 5’9” could do over a trap beat, if he starts to use a “mumble rap” cadence and crafts words within those cadences. If we looked at a rap landscape where word-crafting and “mumble rap” were not oppositional, I think perhaps we could create another thing that is interesting to listen to.

We need to have more conversations about phonocentric versus logocentric engagement with rap music. As a culture, we have to decide whether we value the sound over the words. From child psychology, we learn and know that the sound comes first. Children hear and make sounds as intentions before they understand language. I find myself, like on the track “Familiar” or “OG Mike Dunn,” trying to use a flow that would be catchy in that “mumble rap” sort of way. On “OG Mike Dunn,” I was trying to slide into the emotional essence of what is conjured by Que’s “OG Bobby Johnson” that is going to be attractive to an audience. What can I add to that energy and move it in a different direction than was originally intended? I’m very interested to see what can be done with “mumble rap” to expand its narrative and linguistic reach, and find what lies beyond this particular moment in hip-hop culture.