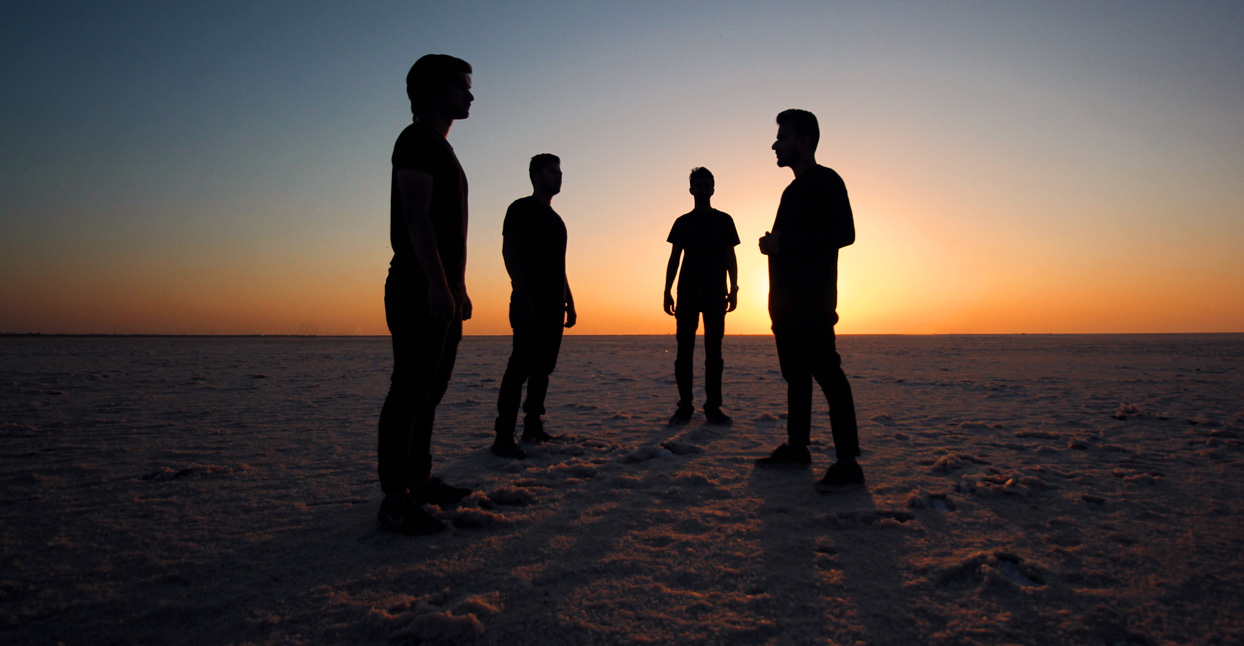 The music of the post-rock band aswekeepsearching—from Pune, India—are inspired by grand concepts: hope, fear, sunsets, valleys, and light itself. And whether or not you understand their lyrics, which are mostly sung in a mixture of Hindi and Urdu, their radiant, skyscraping post-rock is so majestic it can be understood on an almost cellular level. The quartet formed in 2013 as a studio project between vocalist/guitarist Uddipan Sarmah and guitarist/keyboardist Shubham Gurung. However, it wasn’t until after they’d written their first song that they realized what they were making was considered post-rock.

“I got to know about the genre quite late,” Sarmah says. “I was always playing melodies which could fall under ‘post-rock.’ But when I started digging, [I discovered] God is An Astronaut, Mogwai, Sigur Ros.”

It wasn’t until late 2014, over a year after they had started the project, that they first began listening to bands like Explosions In The Sky and This Will Destroy You, who are considered two of the most popular in the genre. And though their band name has post-rock’s quintessential long-windedness, Sarmah says that it was born of function rather than form: For a long while, the two were “searching” for members to round out the band, and the name just stuck. All four of the band’s current members come from metal backgrounds, and both Robert and drummer Sambit Chatterjee also play in a djent band called Noiseware. Naturally, they’re all drawn to the mighty and expansive sensibilities of the post-rock.

“It’s similar emotions, just [expressed] differently,” says bassist Robert Alex. “Post-rock is music that is calming yet contemplative, open-ended and has a different story to tell with each listen, irrespective of [whether] the music is instrumental or vocal driven. The ability to design the music to be huge and cinematic [is something] each of us are very fond of.”

Although each of them are steeped in traditional Indian music (Chatterjee plays with his father in a fusion project of North and South Indian classical music), all four members have been heavily influenced by Western sounds since they were children. The arrangements and presentations in their music reflect their global interests. The titles of their songs and the languages they’re sung in alternate between English, Hindi, and Urdu. On their last album, Zia (which means “light”), they used a sitar and the tabla. On their new record, Rooh (which translates to “the soul”), they brought in the Indian string instrument sarangi for one track.

“It just seemed natural, and it allowed us to find our own identity by adding a touch of Indian authenticity,” Gurung says. “We wanted to add something which made our music stand out from other ‘post-rock’ bands and open up a new perspective towards songwriting itself.”

Their Eastern flair provides a refreshing take on the predominantly Western genre. And since Hindi and Urdu are such different languages than English, there are different vocal patterns and intonations inherent to aswekeepsearching’s music. Beyond just the sound of the words themselves, the way their native language works is more effective for conveying their open-ended subject matter.

“Hindi and Urdu both are longer phonetically than English,” Chatterjee says. “English is fast and expressions are precise where in Hindi/Urdu you can mean a world of things by saying something very simple. Our songs tend to have open meanings as, you can express or think [of] it your way.”

The interpretive nature of their lyrics doesn’t come at the expense of personal meaning. Alex says that this was the first record that they wrote the instrumentals for based on the stories they were soundtracking, rather than the other way around. It’s their most conceptual work in that sense, and it’s also their most intimate.

“We never had such confident stories to tell with our music before,” Sarmah says. “So we named it Rooh, because that’s the most personal thing to anyone—our soul.”

Although the album sounds like a crystallization of the sound they’ve been working toward for years, they emphasize that aswekeepsarching are not necessarily going to sound like this forever. There’s a throughline in their music about seeing beauty in the distance and that seems to be a mantra of theirs in relation to their sonic possibilities.

“Post-rock is how others define us, we see ourselves beyond any genre,” Chatterjee says. “We’re post-rock now [but] you never know what we’ll be in 10 years. If we like pop, we’ll be that; if we like acoustic we’ll be that. Whatever we feel, honestly, we’ll do that.”