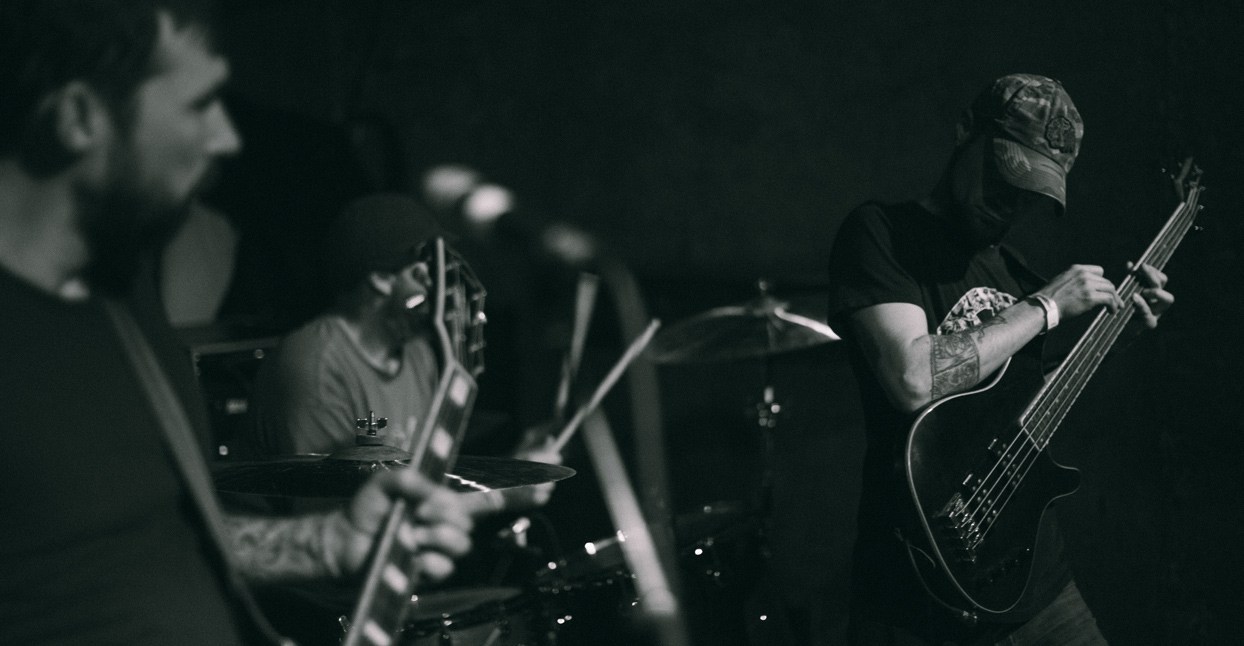 “Doom is just that; crushing, moving, and is meant to take you on a journey,” says Brian Barr, guitarist and vocalist of Aseethe. “It just so happens that humanity is at a rather crucial time in our existence. While the world, in some aspects, is getting better, we have the looming existential threat of climate change. If there is anything that could bring about the end of humanity, it’s that — and it’s right at our doorstep.”

Barr’s ominous proclamation comes in response to a question about why he and his bandmates chose to ditch doom’s more fantastical template and instead tackle our dire political reality on their latest album, Throes. Since Black Sabbath’s first breath, the heavier side of heavy metal has always tackled topics like inequality, class, and the evil that men do, yet, thanks to their enduring sociopolitical focus, thrash and grind are still generally shorthand for “political metal.” However, as Aseethe make plain on their third album, which is replete with anti-capitalist screeds and rage against the climate crisis, doom lends itself quite handily to discussions of our current hell on earth.

“I think stuff like doom, sludge, [and] drone can be a wider canvas to either elaborate on ideas, or explain a feeling without rushing or squeezing it into a few measures,” bassist and vocalist Noah Koester says. “Doom music is excruciating; it is slow, and can be rather painful.”

Their home state of Iowa’s outsized impact on national politics aside (“I don’t know what to expect for 2020; just hoping it doesn’t get weirder at this point,” Koester says with a shrug), Aseethe prefer to keep their focus local. The trio formed back in 2007, coming up in a Midwestern DIY scene that, for all its perceived geographic limitations, allowed them ample room to grow.

“Living in Iowa actually has some benefits when it comes to doing weekend runs; we live within 4-5 hours of Chicago, Minneapolis, St. Louis, Milwaukee, Omaha, and Kansas City,” Barr says, adding that, “I think the Eastern Iowa/Western Illinois scene is less genre specific because there isn’t ten doom bands, or ten grind bands, so we all fit under the DIY umbrella.”

That big-tent mentality has also filtered into their approach to music, which defies categorization even as it draws from doom’s deep well for inspiration. Aseethe’s interpretation of doom is expansive, dark, and dynamic; when they’re not piling on the distortion, the Iowa City trio leans heavily on repetition, summoning crashing percussion and droning riffs that seem to beckon forth the end times. Songs like the closing epic “Our Worth Is the New Measure” start out pensive and understated before hunkering down into a brutal wave of pummeling doom. Elsewhere, on “To Victory,” feedback comes screaming out of a grey sky, punctuating the gloomy tempo and strangled vocals with shards of noise. The album’s shortest track, the instrumental noise piece “Suffocating Burden,” starts out tense and wordless, its ambient menace climbing down into a further pit of cinematic unease before “No Realm” bursts in with an almost post-hardcore sense of melodic aggression.

As a collection, Throes takes no prisoners, and offers no answers. The only takeaway offered is catharsis—and rage. “The rest / the meek / the hardest of life the ones who feel / will have their revenge regain our will / to bring down / the elite,” comes the roar on “Out Worth Is the New Measure,” closing out the album with a barely obscured invitation for class war.

“I always strive for an album to be greater than the sum of its parts,” Barr explains. “The music is always first on my mind, while lyrical and artwork themes come later. Besides art and music, politics is what I keep up on daily. So naturally I feel the need to scream about the powerful elite, because that is what is honest to me… The end is right in front of us, and it cannot be reasoned with.”