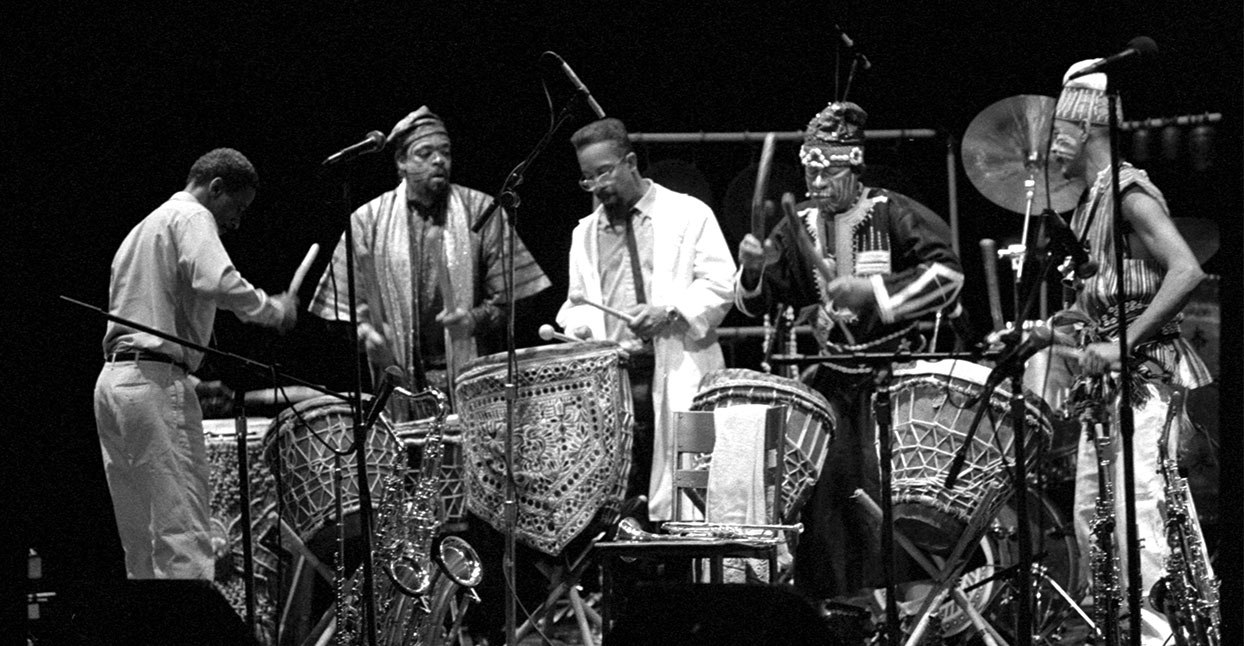 In May of 1969, a Chicago-based quartet of radically experimental musicians made two decisions that resonate to this day.

Faced with the grim reality of joblessness in Chicago, they accepted an invitation to move to Paris. Then, while preparing for the move, the group—then known as the Roscoe Mitchell Art Ensemble (comprised of saxophonists Roscoe Mitchell and Joseph Jarman, trumpeter Lester Bowie, bassist Malachi Favors)—decided to restructure themselves to be an equal partnership. Mitchell’s name was dropped from the marquee; now, they were just the Art Ensemble. The change was solidified when the promoter of their first Paris concert billed them as “The Art Ensemble, of Chicago.”

They took Paris by storm, causing a sensation with performances that combined visual iconography, performance art, and music that was completely original in its concept of sound, silence, texture, and tonal color. When they returned home in late 1971, with drummer Famoudou Don Moye as a member, it was with both confidence and an international reputation that powered their career and made them the flagship band for Chicago’s experimental musical collective, the Association for the Advancement of Creative Musicians (AACM).

“They brought an openness to form,” says cellist Tomeka Reid, another collaborator. “They brought energy, they brought in all kinds of instruments, and they didn’t limit themselves to playing any one kind of music. They have a wide palette, and I think that a lot of the musicians and ensembles globally have been impacted by what they have done.”

They also pioneered a collective approach to music and business, persevering even through the deaths of most of its members. Today, it’s down to Mitchell and Moye.

Nevertheless, Art Ensemble survives, marking the occasion with the release of We Are On The Edge: A 50th Anniversary Celebration from Pi Recordings. The new record features 18 musicians, including Nicole Mitchell, poet Moor Mother, a string section (Reid among them), and a conductor. Roscoe Mitchell and Moye remain its core collective and the creative force behind what they still refer to as “Great Black Music—Ancient to the Future.”

“That’s the reason the Art Ensemble survived—because it was a collective,” says Roscoe Mitchell, now 78. “We took a long, hard look at what happened to our great masters that were out there on their own, and they didn’t fare that well. We didn’t want that. We wanted to have control over what we were doing.”

“Sound is one of the most important pieces of 20th century music,” says trumpeter-composer Wadada Leo Smith, who has worked with several Art Ensemble members. “Each instrumentalist was supposed to create their solo around the notion of sound. Not melody, not rhythm, but sound, and the relationship between sound and silence.”

Art Ensemble members increasingly focused on composition and collective improvisation rather than solos, with influences anywhere and everywhere—from Chicago’s rich jazz history to the European classical music Mitchell studied. Each musician also played several percussion instruments, which added a wide variety of textures. In April 1969, they invited Joseph Jarman, an AACM multi-reedist, to join them. He expanded the band’s tonal palette exponentially.

“Joseph Jarman was completely unique and distinct as a multi-woodwind player,” says Paul Steinbeck, a professor of music at Washington University in St. Louis and the author of Message to Our Folks: The Art Ensemble of Chicago. “If you look at his credits over the years, it’s all the saxophones; it’s all the clarinets; it’s flutes; it’s the double reeds, like oboe and bassoon.”

It wasn’t enough to get gigs in Chicago. Europe had gotten wind of the AACM, and in 1968 a Paris-based journalist invited members to work in France. The musicians of the soon-to-be-collective Art Ensemble were the first to accept, arriving in June and renting a farmhouse outside Paris to live, compose, and rehearse in all-day sessions. The only thing they needed was a full-time drummer; Rochester, New York native Famoudou Don Moye filled that slot in November 1969, impressing them with the wide array of percussion instruments that he played alongside the drums.

The Art Ensemble immediately made an impression, working nonstop and recording 15 albums in their two years in Europe. Upon returning home, the quintet doubled down on its collective structure as a means of surviving in the U.S. They pooled their resources to buy a 1951 Greyhound bus, in which they toured the country for months at a time over the next decade. Moye converted his apartment in Chicago’s Musicians Building into the Art Ensemble’s business office, eventually hiring staff. Revenue from touring and album sales all went back into the Art Ensemble’s coffers.

In the mid ’80s, the band scaled back their schedule, giving members the freedom to explore other avenues. Bowie and Jarman moved to New York and became active there. The Art Ensemble toured and took part in a few high-profile collaborations in the early ’90s, notably with a group of musicians from Soweto, South Africa, before Jarman left the band in 1993 to focus on his practice as a Buddhist priest. They experienced a tragic loss in 1999 when Bowie died of liver cancer.

The band carried on as a trio until 2003, when Jarman joyously rejoined the Art Ensemble. The joy was short-lived, however, as Favors passed away the following year. The others invited Jaribu Shahid, a Chicago bassist who frequently worked with Mitchell, to take his place.

“I had grown up listening to the Art Ensemble before I even thought about playing music,” says Shahid. “It was the opportunity of a lifetime just to know these cats and what they’ve done for the music. They really opened up the way people looked at this music in the world.”

After recording 2006’s Non-Cognitive Aspects of the City with Shahid and trumpeter Corey Wilkes, the Art Ensemble appeared only occasionally, mostly at festivals and one-off concerts. Health issues forced Jarman to retire again in 2011. He made a final appearance at a 2017 New York concert and died this past January at 81.

Though the Art Ensemble is down to two, there’s no corresponding shortage of enthusiasm about the newly expanded, orchestral version that has materialized for their golden anniversary—complete with new compositions by Moye and Mitchell, and poetry by Moor Mother.

“We always said that if the collective gets down to one person, then that’s the Art Ensemble,” says Mitchell. “And now it’s down to two people. The Art Ensemble was like going to school, and right now I’m more excited about learning than I’ve ever been.

“If you’d told me a long time ago, ‘Hey, this thing never stops,’ I may not have believed you. But I understand it now.”