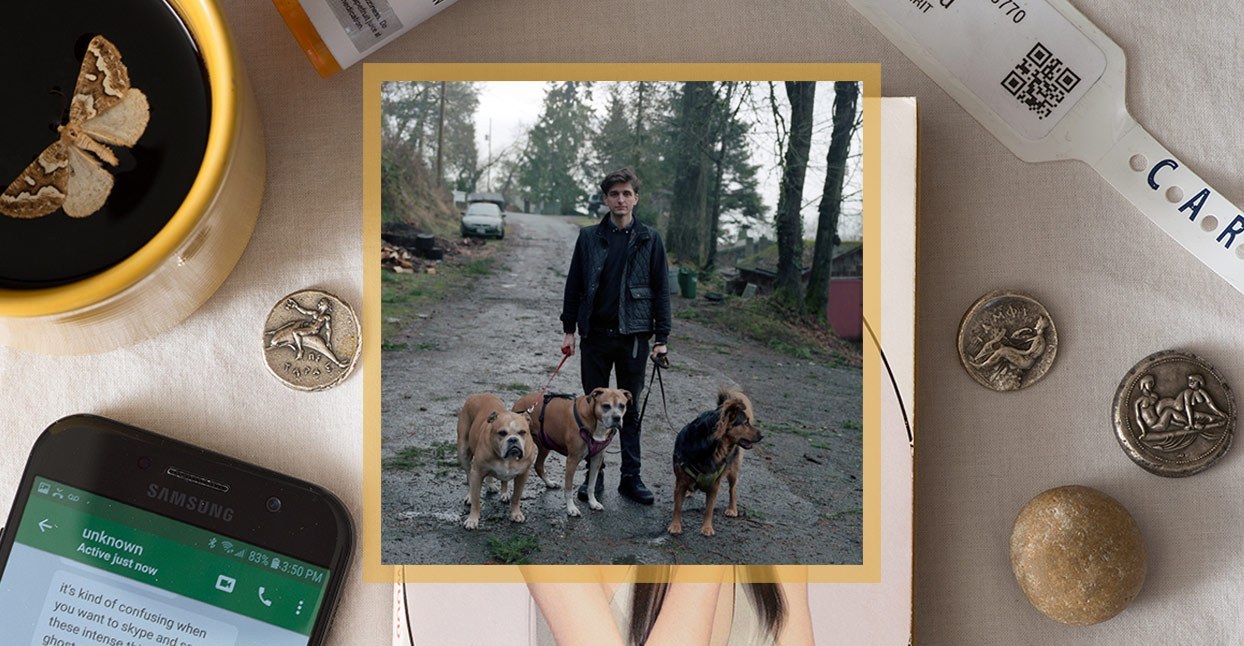 Perhaps the most heartbreaking contradiction of social media—one that we’re now only beginning to appreciate—is that for all the good it can do bringing people together, we’ve rarely felt more alone. Even in a relationship, albeit one playing out over long distance, the Victoria-based electronic artist Antwood (real name Tristan Douglas), has felt the sting of this irony.

“If you can’t reach someone [through social media], you start making up all these catastrophic scenarios,” he says over Skype. “You start thinking they’re mad at you or unsafe or dead.”

Delphi, the Canadian’s third album for Planet Mu, is an attempt to bridge that gap through collaboration with his girlfriend, the artist Olivia Dreisinger. Drawing on her own graduate thesis investigating fan fiction, she devised a dimension-hopping narrative following a young girl named Delphi which Douglas composed the music to, fleshing out story details with his own sometimes difficult experiences. “There’s an honesty to fan fiction, and you can often tell more about the people writing it from what they choose to focus on,” says Douglas. Accordingly, his music charts the journey’s emotional highs and lows through bombastic EDM, pristine sound design, and beautiful but corny piano miniatures. “On my break I find a coffee shop and connect to the internet, and then to you,” album’s titular narrator intones at one point, a passage written and voiced by Dreisinger herself. “I send you a hostile message, and then buy a cheeseburger, and eat it in the sun.”

Dreisinger’s accompanying video to the album—made using an animation program Douglas says is often used for porn and fan fiction—makes clear the scope of the story, incorporating a mystical environment, a strange labyrinth, and talking dolphins. Douglas spent his own childhood an hour’s drive away from Victoria amidst the similarly striking, monumental landscapes of the Pacific Northwest. “My parents’ place was at the base of a mountain but it was also on the coast,” he tells me. “And I think that sense of scale comes out in my music. Things can go from really small to really large, sort of grandiose.”

Like the rest of Douglas’s output—from the sinister avant-electronica of 2016’s Virtuous.scr to the glossy paranoia of Sponsored Content a year later—Delphi explores technological anxiety, but this time through the lens of his and Dreisinger’s relationship. “There was a point where Olivia and I weren’t speaking,” says Douglas. “So I took a picture of this moth which had landed in my coffee cup, and wrote a message about how the moth had sacrificed itself for us to get back on good terms.” The winged insect inspired the clanging IDM of “Cave Moth” and is visible on Delphi’s eerie cover—an uncanny mix of digital and IRL objects—some with a particularly barbed resonance. “When it comes to the hospital bracelets and pills, they just get uncomfortably personal,” he tells me, the album interiorizing some heavy personal moments.

Transformative events are also woven into the album’s fiction. On “Portal,” Delphi travels to the other world, the rush of her metaphysical passage soundtracked by warp-speed trance synths and pointillist kicks. Her voyage ends at the peak of a legendary Greek mountain to “Delphi’s Song,” a maudlin albeit curiously affecting MIDI-sounding piano track. Juxtapositions like these abound, Douglas even incorporating hardcore screams into the electronic maximialism of the album’s title track. Earlier in the record’s narrative, the furious, snapping electro of “Club Dread” twists and turns reflecting the young character’s point of view. “I like the idea of making club music for people who are there but standing up against the wall and don’t know what to do,” he says. “Halfway through, the track just dissolves into this anxious hyper-mess.”

Douglas’s longing for connection in an era when it’s scarcely been more difficult lands with an emotional heft which feels rare for the gleaming, high-fidelity strain of electronic music he makes, its usual irony swapped for a more sincere tone. Delphi is the vessel through which this message is conveyed—the estranged, made-up character speaking to the listener throughout the album, while also gazing back at them through its artwork. “I imagine I’m in my room. You’ll be out somewhere far away from me,” she says on the album’s closing track. “I’ll leave a small hole behind and maybe some dust.”