“When I arrived in [South] Korea, everyone told me there was no good experimental or electronic music here,” says Curtis Cambou, aka DJ 6TS. “I felt like I wanted to prove the contrary. Every little moment I had free, I would go digging for records. I started finding good Korean experimental music, avant-garde jazz, and good electronic music as well. After a few years, I thought, maybe I’m in the position to start something.”

Originally from Nice (in southern France), Cambou has lived in Seoul since 2012, where he’s involved in operating several music businesses. There’s Clique Records, the immaculately curated record store he co-runs with Antoine Hyun-Seung Yoo, aka DJ Odd J, on Seoul’s neon-lit street Euljiro, and Another Planet, a company that specializes in vinyl, CD and tape pressing, duplication, and distribution for underground labels across East Asia. Cambou runs two record labels under the Another Planet umbrella, Braindance Records and Daehan Electronics. Braindance Records serves as an outlet for contemporary Korean IDM and abstract techno artists like THAAD; Daehan Electronics is about tracing and illuminating the forgotten histories of Korean electronic and experimental music.

Partially named as an homage to the electronic stores located on the industrial streets around Clique Records, Daehan Electronics began in 2017 with Experiment No. X. A compilation of material from Busan-based sound explorer and record store owner Kim Byoung Duk’s trilogy of ‘90s albums, it’s a deeply meditative musical journey informed by Kim’s interest in ambient music and Taoist philosophy, bookended by some funky mellow jazz grooves. Experiment No. X was followed by a reissue of the cosmic synth obscurity Quest by Dennis Young, a founding member of New York post-punk pioneers Liquid Liquid. A private press record from 1987, Quest was relicensed for a proper release in South Korea. “I haven’t only been finding Korean music,” Cambou says. “It’s super strange how Quest came out here.”

Cambou hasn’t just been digging, though; he’s also been invested in learning the language and culture of his new home. When I visited Seoul in October, local DJs Luke The Funky Kid and Mogwaa (who also produces excellent modern boogie funk) both commented that he speaks the best Korean of any foreigner they know. “When I came here, I decided to try to make it an experience and really live it,” Cambou says. “I’d work any part-time job I could to step up my Korean.” This commitment has allowed Cambou to really get inside South Korea’s musical underground, a far cry from the opulent K-pop and K-rap that defines the country’s mainstream.

In 2016, Kim Changhee, one of the co-founders of local experimental electronic music collective and record label dingn\dents—and a journeyman musician in his own right—introduced Cambou to an extremely rare album called Circumfluence by Puredigitalsilence. “Kim [Changhee] has been in IDM groups like Damirat and Toxicbiasfleurivy,” Cambou explains. “He’s quite low-key but he runs WATMM [We Are The Music Makers], the longest-running electronic music event in Seoul, and when he was young he was quite into the indie music scene. He found this album, liked it for many years, and later on got friendly with the band members.” 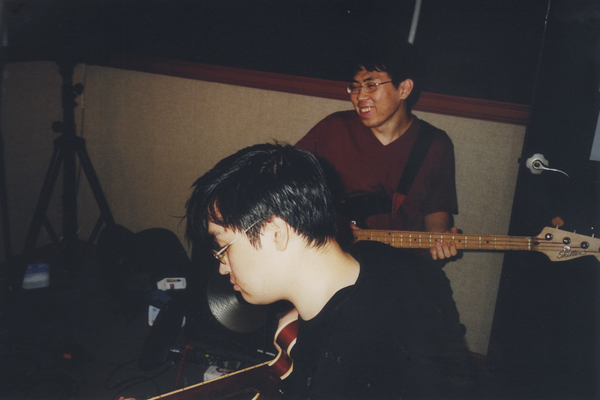 “I come from a psych music background,” Cambou reflects. “When I was younger, I was really into the shoegaze end of psych. Circumfluence combined the classic druggy shoegaze feel with a very modern and contemporary ambient sound. It’s very finely tuned and super DIY, but extremely emotional.” He had to reissue it.

Puredigitalsilence was a collective of experimental musicians led by Choi Joonyong and Hong Chulki, and named in reference to a Melvins song. In 1997, Choi and Hong, then playing together as Astronoise (one of the country’s pioneering noise music acts), teamed up with Yang Yongjun and Jeong Eunju. Using the sounds of U.K. bands like My Bloody Valentine and Spacemen 3 as a jumping-off point, they folded what we can retrospectively view as ambient and drone-synth elements into the mix, and emerged with sprawling epics that often stretched well over 10 minutes. “At the time, they didn’t have access to musical information as we do,” Cambou says. “The band told us they didn’t know what ambient or experimental music really was at the time. They just took their guitars, delay pedals, and synths and loved making noises with them. It’s beautiful because it’s music that came straight from raw feelings.”

In the late ‘90s, punk, metal, indie rock, and experimental bands were lumped together under the catch-all term “indie” in South Korea, and promoters would ask bands they’d booked to make recommendations. Puredigitalsilence took advantage of this to join show bills in Seoul’s bohemian Mapo District. In 1998, Astronoise had a song included on a compilation released by Kangaji Records. When the compilation failed commercially, the label owner offered to release an album for them as compensation. Choi and Hong opted for a Puredigitalsilence release, brought in experimental artist Hankil Ryu (aka Daytripper) to collaborate on a track, and Circumfluence was released as a limited-edition CD.

Puredigitalsilence stopped performing in 2002, but Choi and Hong kept playing, and have long operated free improvisation/noise music collective and record label Balloon & Needle together. When Cambou contacted them about reissuing Circumfluence through Daehan Electronics, given its 20th anniversary, they quickly agreed. “At the time, no one understood their music,” Cambou says. “They told me that every time they played a concert, everyone was like, ‘What the fuck did they even just do then? What was that? What is the point?’ They’re an anomaly; there was almost nothing like this in Korea ever.” Two decades later, Puredigitalsilence are poised to enjoy the critical reassessment they deserve. At the Circumfluence release party in December, they reunited on stage. By all accounts, they’ve still got it.