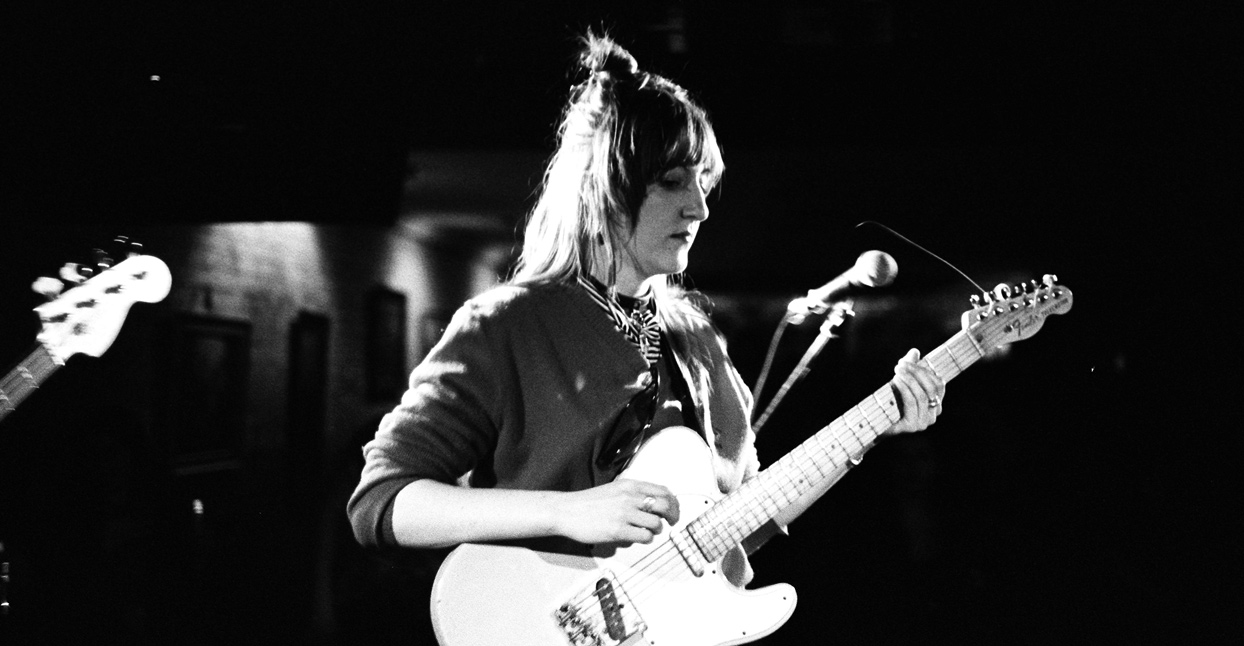 On her previous albums—both solo and with Australian underground favorites like Straight Arrows and Circle Pit—Angela Garrick’s approach to music has been raw, loose, punchy, and brimming with a kind of melancholy agitation. On her newest solo LP, Shyness, she strips that sadness down to its barest components, using piano as the central instrument as opposed to guitar. The result is almost uncomfortably intimate—minimal and breathtaking in a way that recalls Cat Power and Shannon Wright.

We caught up with Angie to learn about her stylistic shift, her poetry, writers she loves, and making room for different approaches to making music.

Why did you choose to build this album around the grand piano? What was it about that instrument that attracted you?

My decision to make a record on piano was the result of a combination of spontaneous and serendipitous situations. I do have a background in piano—I learned it when I was a small child, but rejected it once I became a teenager and became enamored with electric guitar. I wouldn’t go near a piano for years, until an old out-of-tune piano turned up in a share house where I was living. Occasionally, I would tap away at it when I was sure no one was home and record small things into my phone.

More recently, I became intrigued by the process of improvisation on piano, and attempted to learn Erik Satie’s infamous “Gymnopedies.” It was at this time I revisited those demo improvisations and, when I was trying to replicate them, I found it impossible as they were written on a piano that was completely out of tune. I hired a piano teacher to help me notate the recordings in a way that I could perform and develop them on a normal piano. Those tracks became the core of Shyness.

Your lyrics take a kind of “metaphysical” approach. Is that a reflection of your thought process, or is it more a way to mask your feelings?

I once gave a collection of my poems to an elderly man who comes into my work, and he came back a few weeks later telling me that he found my poems to be “fragmentary realizations,” in the sense that they are everyday revelations that allude to darker presents and pasts without ever really revealing their origin. It’s something ephemeral—something beyond yourself.

I suppose I’ve never been one to really be too ‘present’ in my work. There is a definite sadness, but it’s a kind of muted sadness—like a sadness without language. I don’t want to dictate to the listener. I want them to create meaning for themselves. Words often simply act as a thematic guide. You want to give, but you don’t want to give too much away—like almost everything in life!

Are there any artists, authors, or poets who inspired the way you write?

I am so enamored by poetry—the fact it exists, trapping thoughts, is in itself a wonder. The biggest influence on Shyness would be, without a doubt, the Brazilian and Czech author Alejandra Pizarnik. Her two collections translated into English—Extracting the Stone of Madness and A Musical Hell—are definitely big influences. Maggie Nelson’s poetry collection Bluets would also be an influence.

Some of your previous power pop-inspired work is so energetic, which is jarring compared to the mellowness of Shyness. Why was there such a sharp shift?

I would say that it is just a stylistic shift. As far as I am concerned, I’m doing the same thing I’ve been doing for almost 15 years—making music and making art and making things. I perhaps have slowly gravitated towards more ‘relaxed’ sounds, and perhaps that’s a symptom of getting older. Also, the songs on Shyness could have been executed with electric guitars, but the choice to use piano was just something that happened. I was working somewhere where there was a piano, so I would play away on my breaks, and revisit those old demos that I made. At the same time, my friend Yoni mentioned that he could record me at this studio that had an amazing huge piano. So those two factors kind of came together and it just made sense. It wasn’t something that I really sought out to do.

Does the title, Shyness, refer to your personality, or to the way you were feeling when you made the album?

I often become fixated on particular words, and at the moment of recording, I was enamored with the word ‘shyness.’ It is just a beautiful word that never gets much attention! I love how it both starts and ends with ‘S’s.

Regarding the thematic link, people always tell me that I need to come out of my shell, or express myself; when they see me playing live, they tell me that I need to do this, or I need to do that. But sometimes, they do not consider the fact that I might be perfectly OK with the fact I’m not a natural performer—or that I’m ‘shy’ or I’m not a ‘showman,’ or whatever. There should be spaces for all kinds of performers and they should make music, perform it, sing it, tour it, exhibit, etc.

Sometimes the things that people perceive to be a ‘weakness’—I often become inspired to write when I’m in that kind of condition, and I would think a lot of creative people would experience the same thing. Sometimes, these characteristics are what make you you, and in this strange flat world of screens and ‘hits’ and more engagement with pixels than with people, it is nice to consider things like emotions, frailty, and poetry.