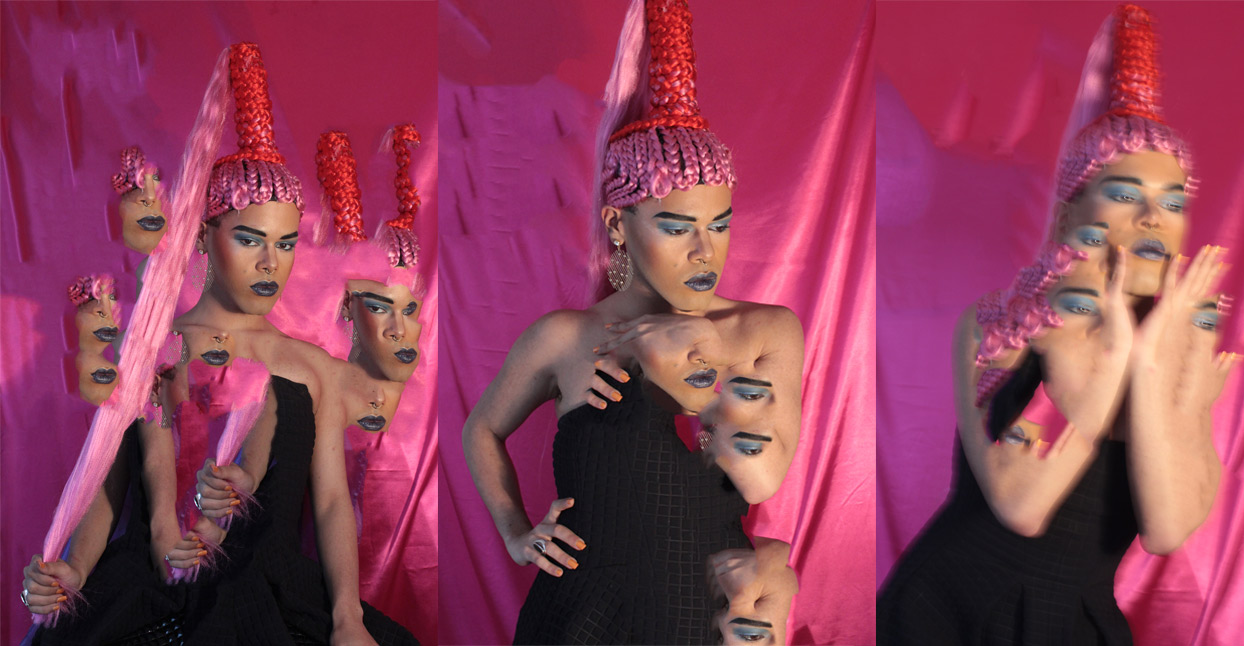 “I want to travel on a private jet, honey!” Angel-Ho croons over the phone. The 24-year-old Cape Town-based artist, real name Angel Valerio, is already plotting towards her chart-topping neo-pop stardom and the glamorous lifestyle that comes with it. This scintillating future—as portended by the lyrics of her first album and Hyperdub debut, Death Becomes Her—sees Valerio harnessing her true power as a self-described “trans goddess”: the eidolon of Manhattan’s Fifth Avenue, adorned in diamonds and buttoned-up in Gucci blouses.

To be clear, this persona’s not a walking flex. “I don’t see luxury as wealth,” she explains, defining it instead as “something that is created by your own self and your own sense of expression.”

By this definition, Valerio has been embodying luxury long before these gold-studded dreams were even within grasp. She first cultivated her personal sense of expression performing in area theater productions at 15 (she played Frank N. Furter in a high school production of the beloved Rocky Horror Picture Show). Her stage name—a reference to the 2003 reprise of Charlie’s Angels, coined by her cousins—dates back even longer. Once she reached high school, she took her dramatic repertoire in a musical direction, writing irreverent songs on her own time. (One particularly memorable piece, Valerio jokes, was about “being a Judge Judy of fashion and being really shady about what people were wearing.”)

The following two years saw several shortform works from Angel-Ho: Ascension, released in partnership with Houston label Halcyon Veil, and Emancipation and Red Devil, both released via NON Worldwide. Whereas the former two pieced together a fractured black queer trans narrative, Red Devil pushed Valerio’s existential chaos further into offense mode. Heavy with propulsive drum patterns and samples of shattering glass, her previous works seemed to spasm under the weight of its trauma. Now, she says, “Sometimes, I can’t even listen to my old music because it is so destructive to me.”

Death Becomes Her represents the polar opposites of that struggle, commemorating the good times instead—namely, the moments when pop saved her life. Valerio singles out Lady Gaga’s album Monster in particular. When she felt really isolated from the world, she says, the songs helped her reach a “celestial state of mind.” To that end, there’s an obvious psychic connection between the two albums, which temper uplifting pop with harrowing themes. Where Gaga’s lyrics contain body horror metaphors of having her heart devoured, Valerio sings of deathly hatred for a lover on the dissonant soundscape “Bussy,” and shrieks about celebrity mental breakdown on “Like That.”

Always one to champion bold statements, Valerio chooses to communicate her newfound self-acceptance through celebratory sass and swagger on Death Becomes Her. The gleefully tongue-and-cheek album struts like a self-assured material girl who’s been through some shit, but is too busy filling her closet with Dior’s finest to let the skeletons inside haunt her. On opener “Business,” Valerio sings hypnotic circles (“agga agga, Balenciaga”) around her own vocals as guttural screams pierce the background. The gauzy R&B track “Baby Tee,” produced by Asma Maroof (aka Asmara, also of Nguzunguzu), underscores her devil-may-care attitude, declaring, “Everyone’s depressed, there’s no stress though / I’m no hoe / Getting checks and I’m blessed, yo.”

Prior to Devil, Valerio confesses she hid behind her DJing and her performance art. Like armor, she used her body as a defense mechanism to “initiate discussions on identity” at a time when she thought her voice “wasn’t what anyone wanted to hear.” Flaunting her brazen vocal and lyrical abilities now for the first time “sparked an entire universe for me,” she says. “It made me understand my freedom is boundless and I wanted that to be communicated prominently.”

True to her thespian roots, Valerio wrote the album with the intention that she’d be performing it 50 years from now at stadium sell-out shows—“quite possibly slowed-down renditions, quite theatrical, and quite Vegas showgirl,” she envisions, “and maybe on a piano.”

The logistics of her upcoming live shows are only slightly less maximalist. It will involve choreography, visuals, and at least six costume changes—think Liberace meets Grace Jones couture—throughout her “jam-packed” hour-long set. She anticipates there will be a strong call-and-response dynamic with the audience. “It will be very high endurance and athletic,” she proudly reports. “I would say I’m training to be an Olympian of music.”

The “factory of Angel-Ho,” her self-described term for her industrious creative output, stops for nothing. At the heart of Devil Becomes Her, opulence is more a state of mind; being able to pursue one’s craft is the utmost privilege. Private jets, first class, or otherwise, “I would still be sitting in the back of the plane, touring the world without any regard,” she says. “I’d rather live that life than anything.”