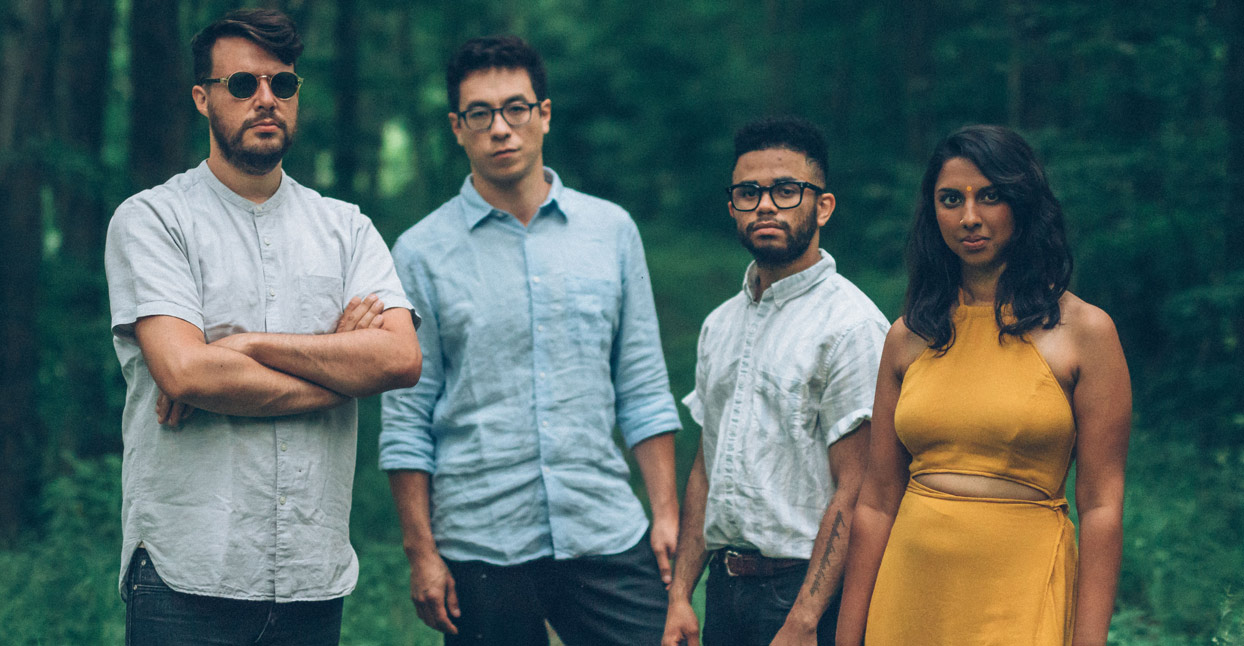 The vocalist, harmonium player, and composer focused on its words as she wrote the explosive second album by her group Elder Ones, From Untruth. “‘Untruth,’ in the Hindu philosophy, is a shorthand for ignorance,” says Kidambi. “And I feel like we’re in a very ignorant era.”

Kidambi is a prolific collaborator within New York City’s avant-garde underground; she’s appeared as a member of Mary Halvorson’s Code Girl, and presently performs in a voice-and-electronics duo with Lea Bertucci, among other projects. Her body of work provides a lens on the wide-ranging music communities she inhabits, at the intersections of free jazz, the classical avant-garde, and experimental electronic worlds. But the singular musical language that she creates with Elder Ones is entirely hers: drawing on the Indian classical music she grew up with, studying South Indian dance her whole life and then Western classical music in college, and the improv underground that helped her find her creative voice.

From Untruth follows 2016’s Holy Science, which was made around when she’d started studying Carnatic voice, the South Indian music tradition. “I was trying to find, in that first record, a way to blend this background in Hindu devotional music, my avant-garde classical technique and language, my love of spiritual free jazz and Alice Coltrane and late John Coltrane, and punk and protest music, and find a way for those things to coalesce,” she says.

“The thing that a lot of these things have in common are some level of intensity,” she adds. “Even Indian music—it might not be violent, jarring, or visceral, but it has intensity that is maybe more on the side of transcendence or ecstaticism of elevation of the mind, above this reality. That is equally potent to me… The political bent is also one of survival.”

Those influences also comprise From Untruth, but here, her world of sounds expands to incorporate electronics and lyrics for the first time. It’s a sound palette that Kidambi explains is very personal to her: “My narrative as a person troubles a lot of dominant ideas of what an Indian woman is, or a minority growing up in America. What I thought I was supposed to do, or able to do. Calling myself a composer, I’ve only been able to really do that very recently for myself. It was uncomfortable for me at first. I so had been programmed  to think that I could never be a composer, because look at me, I’m not a white man, how could I be a composer?”

Kidambi’s self-described “zig-zaggy” trajectory to Elder Ones has made for compositions that are masterful and cathartic, aggressive and challenging. On From Untruth’s opening track, “Eat the Rich,” she and her bandmates—drummer Max Jaffe, saxophonist Matt Nelson, and bassist Nick Dunston—compellingly blend the sound of the harmonium with electronics (her synth, and also Jaffe’s sensory percussion set-up that he also uses in his solo work) to prop up an ominous indictment of techno-utopianism. Over 13 minutes, the quartet tears into “mega rich people selling this vision that everything will be fine! Because we can fix everything! We can figure it out through technology! But it’s really these people profiting off of it, and if everything goes to hell, they can just go into their bunker underground and ‘Fuck everybody else.’”

To that, employing a poetic economy of words, Kidambi suggests a different type of fix: “Take apart the world  / Sell it off, piece by piece / And live forever,” she begins, stretching every syllable, before it explodes into sirening hardcore sax belts and skittering percussion weaving with her vocals. Later, a warning: “Eat the rich, or die starving.” It’s about “technology as this lie in modernity,” but also about disillusionment with technology as a tool for mobilizing activism, and how those same tools have led to an era of everyday distortion of information, of reality, of truth.

“Dance of the Subaltern” and “Decolonize the Mind” both unpack the colonial mindset, inspired by a formative year spent studying postcolonial theorists like Gayatri Spivak and Richard Wright (in an ethnomusicology PhD program, which she eventually dropped to accommodate her performance schedule). Themes of decolonization and the need to “deprogram ourselves collectively” from colonialism’s violent legacy are ever-present throughout the record, also inspired by a summer Kidambi spent in India, meeting DIY artist-activists, discussing Indian politics and colonialism and classism and her place within it.

“What we’re learning now is, none of it is over, no problem was ever solved. It’s on us to continue down this road,” she says. “I don’t know how to make music anymore that isn’t also addressing some of what’s happening in the world.”