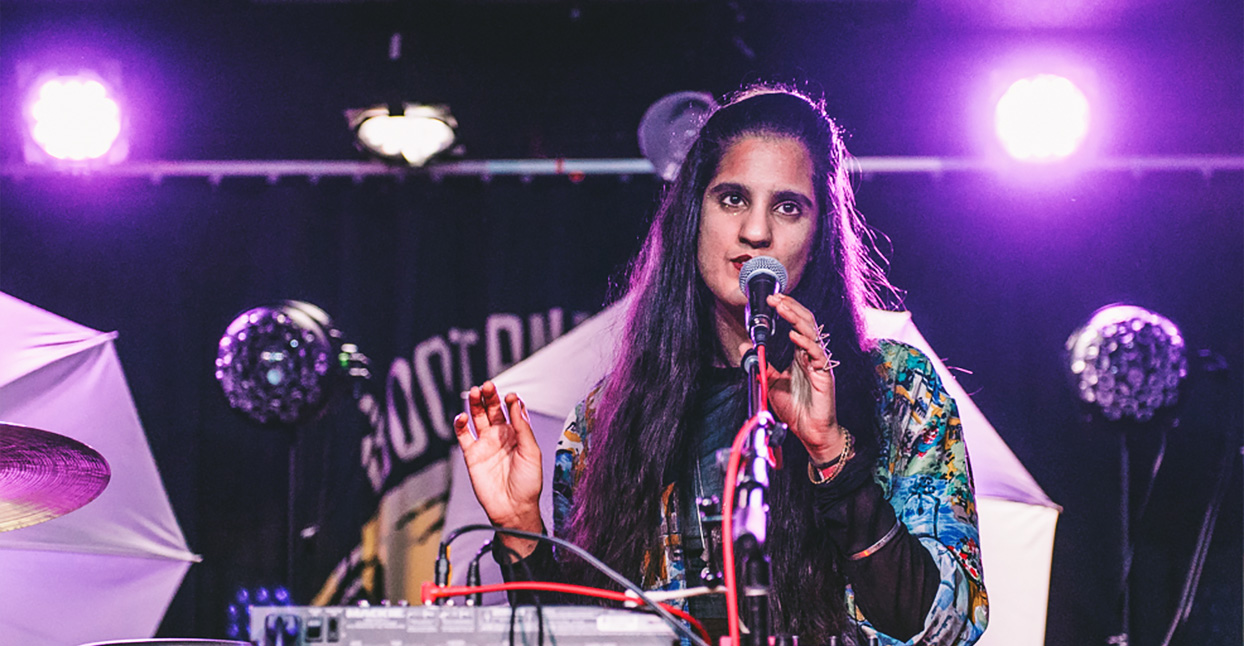 Ami Dang is a Sikh-American electronic pop artist whose work is informed by a host of deeply personal influences—among them, Ancient Indian texts and hymns, ‘80s and ‘90s Bollywood hits, and American dance music. The result is fiercely unique music, where looped sitars and winding, raga-like melodies share space with pulsing electronic rhythms. Living and working in Baltimore, Dang’s music is colored not only by her own multi-cultural background, but the tensions between forward-thinking art and politics and traditional Rust Belt conservatism.

On her latest album, Uni Sun, Dang sings in both English as well as her native Punjabi. The album as a whole is eclectic and dense, its combination of ancient and contemporary musics giving it an otherworldly feel. We spoke with Dang about how her background has impacted her creative process and her artistic vision.

To start, I’d love to hear a little bit about your family background.

I grew up in a Sikh-American household. My family are immigrants; they moved to America in the 1970s. My family is pretty religious, and I grew up with a lot of religious music being played on the stereo, as well as going to services pretty regularly. Sikhism is the 5th largest religion in the world. It’s a pretty major world religion. It is a monotheistic religion, separate from Hinduism and Islam. The divine in Sikhism has no form and no place, and is also timeless.

The majority of the scripture is intended to be set to music. Therefore, it’s written in ragas. In Western Music, we have the major and minor modes. In Indian classical music, we have countless modes. So every hymn that’s in our main scripture is set to music in a particular raga. A huge part of my upbringing was singing religious music. I was learning a little about ragas as a child, but I learned more [as I got older], when I started playing sitar and took formal vocal instruction. So, yes, a lot of my music is at least loosely based in ragas. A lot of ragas have certain [compositional] rules, so I might start with a raga and branch out of it.

Lyrically, a couple of songs on this record are hymns from Sikh scriptures, and I set them to melodies. If you look on the credits, the songs are credited to gurus who wrote them in the 15th century. That’s just a part of my process. I am not the most religious person, but musically it is exciting to take something that was so ancient and combine it with electronics and instrumentation that is more contemporary.

How did you get into playing sitar?

I grew up in Baltimore County, and my mom heard about someone who was teaching sitar and Indian classical music. She said to me one day, ‘Hey, I heard there’s somebody here who teaches sitar, do you want to learn?’ And I basically shrugged my shoulders and said, ‘Sure mom, whatever you want!’

You don’t see too many female sitar players. Does that have to do with sexism in your native culture?

There isn’t supposed to be sexism specifically within the Sikh religion, but I will say that in most of South Asia, the patriarchy kind of runs things. Within music, I would also say there isn’t supposed to be much sexism, but you will find that most sitarist are men. I don’t think the instrument has a connotation with any gender identity, but there aren’t that many female-identifying sitar players. I now have a guru, who is in Delhi, who is a sitar player. She is a very matriarchal, strong musician. She’s pretty rad.

So, let’s talk the other major component of your music: American pop.

Sure. I grew up like any other kid. My parents also listened to a lot of ‘80s and ‘90s Bollywood music, so that has a huge influence on my music—and I listened to the radio and whatever alternative music was hot at the moment. I have older sisters who were super into Depeche Mode, Violent Femmes, and Jesus Jones. I loved C&C Music Factory, and Paula Abdul was the first tape I bought at eight years old. I also listened to Technotronic, and was really influenced by diva house. Then, in high school, I got into trip-hop, and bands like Massive Attack. That was my soundscape. My family is religious, but they didn’t prevent us from being exposed to pop culture.

How did you learn to produce music?

I got really lucky. I went to a high school that offered a music technology class. It was developed during my senior year of high school. I started learning ProTools in that class, and it made me think about music in a different way. We weren’t doing anything super cutting edge—we were just recording our friends’ bands and our own bands. But it got me thinking about the interface, and interacting with music in that way. I ended up going to Oberlin College and going to the conservatory, so that led me into the music tech program.

What is your current album, Uni Sun, about? What’s that gold stuff all over your face [on the cover]?!

[laughs] That’s what my mom asked me! I am not actually throwing gold liquid over my face. The actual photo shoot, we dyed heavy cream green, and I worked with an amazing graphic artist, Andrew Strasser—he did the infamous Girl Talk cover with the fire on the suburban lawn.

The first iteration of this record was called Sun on Our Skins. The record is a lot about identity and energy. I am dealing with issues of not being black and not being white, coming from a place where people want to put a very distinct identity on who I am in my music. I was born here [in America]. My music has a mix of the contemporary and the ancient, and a mix of the East and the West, and I live in a small city which is a very urban place. There are a lot of things happening here that are both very radical and very backwards, for sure. I think my music represents a lot of those contradictions. I don’t put my music in a specific genre, because each song on the album is very different.

The songs on the album are very diverse. Some of them are in English [and] some aren’t; the styles of each song vary, too.

Each song has a different thesis or question. Some of the songs are in English—it’s about half and half. I grew up singing in many different languages, so to me it feels very normal. It doesn’t feel subversive. I grew up in a multilingual household, and later ended up learning Western classical music, and ended up singing in French, Italian, German… so to me all that is so normal, and so much more beautiful and interesting than just setting English syllables to music. I think working with English is also hard, because people want to dissect more meaning from the lyrics. I think people treat my songs more like an instrument when I set it to a different language.