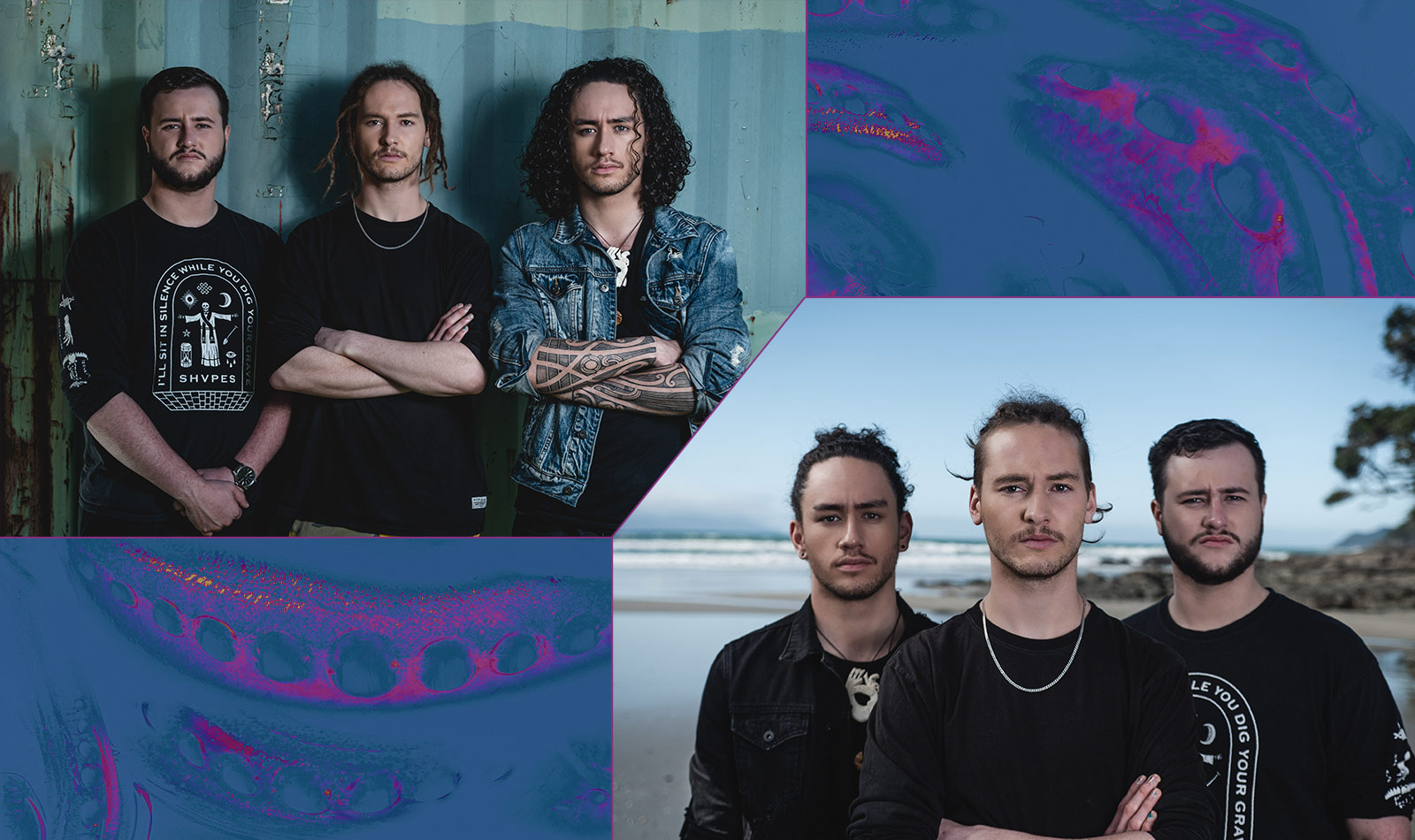 In the three decades since the trailblazing Brazilian thrash outfit Sepultura rose to international prominence, heavy metal has grown into a global phenomenon embraced in just about every inhabited part of the world. Once regarded as a European/North American cultural heirloom—albeit one with demonstrable appeal as an export to other “markets”—the genre is now rife with examples of artists drawing on traditional sounds from elsewhere. Among them, New Zealand trio Alien Weaponry provides yet another case for metal as an infinitely pliable artform that belongs to everyone. Formed in 2010, when sibling co-founders Henry and Lewis de Jong were just 10 and 8 years old respectively, Alien Weaponry has carved its own singular path by putting the de Jong brothers’s Māori heritage front and center, with frontman/guitarist Lewis writing and singing mostly in te reo, the language of the Māori people (pronounced MOW-ree with a rolled “r”).

There’s certainly charm in the image of a plucky bunch of kids causing a minor stir in their home country, but most listeners outside New Zealand got their first taste of Alien Weaponry in 2018 via the band’s debut full-length, Tū. The members may not have been of age at the time of recording, but the sound was fully-formed and mature: a striking hybrid of thrash, groove and prog, spiced with culturo-linguistic elements that would sound enticingly unfamiliar, even to many listeners of Māori descent. By the end of that year—having done the European festival rounds, toured the States as Ministry’s opening act, and featured in a Vice Asia segment hailing the de Jongs as saviors of a dying language—experience had stamped out any remaining traces of youthful amateurism. Nevertheless, if suspicions persist that novelty played a role in propelling Alien Weaponry onto the world stage, the band stands poised to quash those suspicions once and for all with its new sophomore full-length, Tangaroa.

Appropriately enough, Tangaroa (named for the Māori god of the ocean) opens with the sound of waves and seagulls as a traditional paddling chant weaves through a cycle of repeating feedback tones from Lewis and tom-tom rolls from Henry, the first indication of the rhythmic highwire act the band sustains for the album’s hour-plus runtime. (Both outgoing bassist Ethan Trembath and new bassist Tūranga Morgan-Edmonds appear on the album.) If you’ve ever longed for music that recaptures the progressive spirit of late ’80s/early ’90s metal without simply copying old blueprints, Alien Weaponry proves with Tangaroa that vintage influences can be approached with a fresh vision. The band is able, for example, to align the Meshuggah-esque sawblade riff that drives “Hatupatu” with the verses of a menacing haka (war dance) composed by Henry, who laces his beats with effortless touches of math-metal flair. It’s a flawless crossover; the half-shouted/half-spoken cadence of the haka blends seamlessly into the band’s gnashing attack, dissolving into both the main riff and the nu metal-style breakdowns that punctuate the song’s structure.

“We were taught haka, waiata [musical oral history] and all sorts of songs at kura kaupapa [Māori immersion school] as kids,” Henry explains. “So we were very exposed to Māori music.”

Still, much of their appreciation of Māori music was instilled indirectly via the album Waiata of Bob Marley, a tribute album by the Māori artists Ruia & Ranea that was played often at home. Moreover, the brothers were also encouraged to listen to a mix of styles, never feeling the pressure to identify exclusively as metalheads. This may account for the band’s smoothness and command of dynamics when it changes its approach mid-song. On “Ahi Kā” (“home”), the full-on metal drops back to make room for a dusty recording of Queen Elizabeth II delivering her annual Christmas radio broadcast from Auckland in 1953. It’s one of the most gut-punching moments on Tangaroa, letting historical irony speak for itself as the queen addresses the subjects of the Crown, intoning in her ultra-proper English diction that she finds herself “completely and most happily at home” in New Zealand. The queen’s delicate voice provides an eerie subtext for Lewis’s impassioned recounting of the British government’s bloody land-seizure campaign against native inhabitants.

Land rights disputes between Māori natives and English settlers have been a source of bitter contention dating back to New Zealand’s founding document, the controversial Treaty of Waitangi, signed in 1840. By the most charitable reading of history, the terms of the treaty were incorrectly translated into te reo, resulting in divergent interpretations by two parties that held radically different definitions of “property” to begin with. Unsurprisingly, the treaty failed to foster peaceful co-existence, and nearly thirty years of warfare soon followed, with the British army ultimately resorting to burning villages as leverage against a Māori fighting effort that managed to hold its own despite being vastly outnumbered. So when Lewis and his bandmates shout “Tahu toku kāinga/ Tohu ahi kā” (“my village burns/ my home”)—or when they celebrate the call to battle of a 19th-century Māori insurgent on “Titokowaru,” for example—they put a coat of realism on metal’s otherwise fantasy-driven battle tropes.

Of course, the de Jong brothers were born several generations removed from the scenes of violence and tragedy they describe in these songs, which don’t address the fact that, prior to the arrival of Europeans, Māori tribes didn’t identify as a single people and frequently engaged in warfare with one another. There’s also an argument to be made that New Zealand is actually setting an example for how societies around the world can begin to heal from—or at least acknowledge—the demons of their colonial past. Anyone familiar with international rugby competition, for instance, will recognize the haka, which the national All Blacks team has long performed before matches. In a more recent development, Radio New Zealand broadcasts now routinely begin with greetings in te reo. And many inhabitants commonly refer to the country by its blended Māori-English name, Aotearoa New Zealand.

These kinds of gestures may seem cosmetic—symbolic band-aids for an ugly legacy of discrimination and marginalization—but at the very least they signal an intention not only to value and re-integrate the Māori presence, but to re-imagine the country as a truly bi-cultural society. The de Jong brothers, who have Dutch ancestry on both their mother and father’s side, are the product of complex, intertwined histories. As such, they find themselves in an awkward position: they’re more familiar with the language and customs than the average Māori-descended New Zealander, but they also have Dutch last names and look white, which means, as Henry describes it, that they “get shit from both sides.” It might be too obvious of a leap to make, but maybe there is something about shuttling between two worlds that equips a person to oscillate between musical styles with such ease. This is a band, after all, that isn’t content to rely on screaming and shouting alone.

On the title track, Lewis shows an almost balletic quality as he rolls the syllables of “Tan / ga / ro / aaaaa” off his tongue, his voice so filled with melody that it takes flight above the bracing thrash riff he plays underneath. The song, centered around ocean pollution, takes its place in a hallowed lineage of heavy metal protest songs about the impending death of the biosphere. The subject has a particularly personal resonance, though, coming from the members of this band—not only do they hail from a remote island nation, but they’ve also spent their whole lives connecting with their roots in a culture forged by perhaps the most skilled navigators in human history.

“One of the first things I remember,” Henry offers, “is being taught how to swim. The ocean, the water, has always been a part of my life. It sustains me and it’s all around me constantly. For me personally, it’s hugely important that we all have that for generations to come.”

Not to mention that the Māori principle of tapu—the sanction against using scarce resources (and the precursor to the English word “taboo”)—aligns perfectly with the eco-consciousness that’s prevalent throughout New Zealand more generally. One doesn’t need to know any of this, however, to get swept up in the adrenaline rush the song arouses so beautifully. With Tangaroa, Alien Weaponry shows us that all that pie-in-the-sky talk about heavy metal as a universal language was actually true all along. And as the band travels throughout the world, the de Jongs are coming to understand that their own perspective is more universal than they could have imagined.

“It’s been really interesting to see [as we travel],” says Lewis. “We’ve had quite a profound connection with the Navajo Nation when we come to America. I don’t think we’ve gone to America without stopping in Gallup, New Mexico and playing a show for the Navajo Nation. And that’s just to name one.”

“That kind of connection that other indigenous people feel with what we do,” adds Henry, “was a little unexpected at first. We didn’t realize it would have such an impact on people who weren’t Māori, but who shared those same [types of] experiences.”