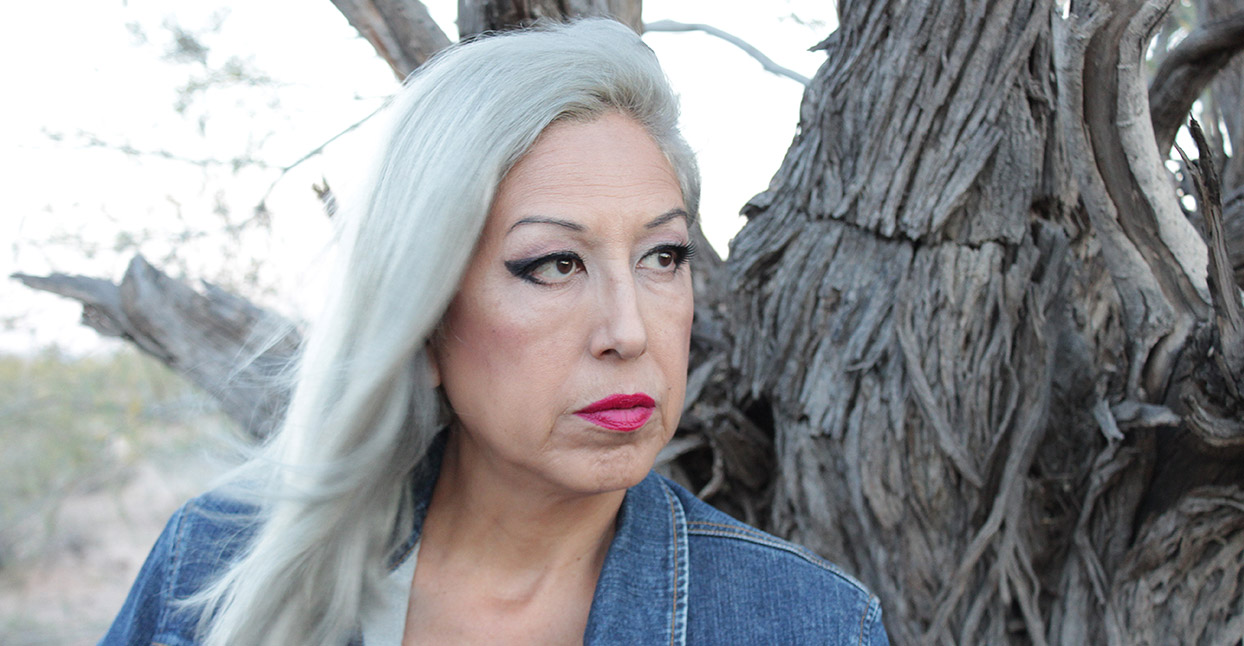 “I feel like I have to come back and strike back, not necessarily with my fists, but with my words or actions, to combat the oppressors.”

Alice Bag, lead singer of the 1970’s punk band The Bags (and, later, the Alice Bag Band), broke out of the musical and social gates quickly, both changing and documenting the vivid world of L.A. punk around her while barely out of her teens. Blending punk with the ranchera music she’d grown up listening to, Bag created punkchera, an entirely new subgenre, and helped pave the way for several generations of Latin@ punks. Throughout her career, Bag has considered herself a “feminist archivist,” always adapting to new technologies and trends. These days, she uses social media to keep her followers informed of movements, rallies, protests, and other current events.

Bag is also an author of note. In 2011, she turned her archival eye inward with the publication of her memoir Violence Girl. While Violence Girl is primarily Bag’s musical autobiography, it also highlights how witnessing domestic violence made her unflinchingly committed to her own strength and voice—and to helping other women find theirs. In 2015’s Pipe Bomb for the Soul, she chronicles her trip to Nicaragua while the Sandinistas were in power.

Now, in 2016, she’s releasing her first ever (self-titled) solo record. The songs on Alice Bag often speak directly to young women, encouraging them to think for themselves and to accept their bodies. Here, she talks to Bandcamp about empowering her own daughters, the difficulty of writing Violence Girl, and about some social movements that get it right.

What does it mean for you to release this album, your first solo album, now in 2016 in all the messiness that we have going on in America?

It’s crazy. It’s really exciting to be able to release it right now. I feel like I have so much to say that I’ve been filing away for years. By messiness, do you mean the election?

The election, which we all know is nuts, and then there’s all these other things, like reproductive rights being aggressively under attack, bathroom bills, and a lot of identity politics happening, lots of issues around guns, all coming to a head.

The thing is, I feel like I’ve lived long enough to see that these issues are cyclical and I remember living through a time when people said “Oh, there is no need for feminism because we’re all equal now. Women can work. Women can wear pants.” At that point, a lot of people checked out and felt like we were done. But we constantly have to be re-evaluating ourselves as a society and figuring out how we can make it better. There’s always going to be that person who’s like, “They got it wrong! I’m gonna go back and try to reverse Roe v. Wade.” Some advance that we’ve made is always going to be challenged, so we have to stay on top of things. We can never afford to just kick back.

Do you think your music helps people get out of their complacence?

I certainly hope so. I was really surprised when “Poison Seed,” my second single, came out, that I had an enormous amount of troll activity on my social media sites. I just had people reacting so violently that it was surprising that people were so threatened by my message. And it’s good, you know? It means it had to be said. Challenging Monsanto and challenging the businesses that go unchecked is something that we need to stay on top of.

When you feel that you don’t have power, you don’t feel confident enough to fight back, and you buy into this cycle of oppression. You’re less likely to come back swinging. I hate to use the reference of violence, but that is the story of my life. I feel like I have to come back and strike back, not necessarily with my fists, but with my words or actions, to combat the oppressors.

I am coming at it in that post-traumatic way. I didn’t realize it until I started touring with Violence Girl and I found that a lot of my issues were surfacing when I was unaware of them. Even before I thought of what I was going to write in Violence Girl, I found myself reacting specifically to the process of writing, like feeling nauseous at the idea of telling a certain story and not knowing why I was having these physical reactions to a story I wasn’t even conscious of yet. I just started writing. I would have a little picture in my mind of something that happened that I hadn’t thought about in a long time, and I started writing. I didn’t know the story, the whole memory. But my body knew that there was something I was blocking out. It started making me feel physically ill. Yes, I realized when I started writing Violence Girl that I was reacting in a post-traumatic way.

How did you get through that?

I wrote and posted it. I actually did get sick and I cried. Things that are very traumatic and descriptive in Violence Girl, I won’t go back and read them again. If I do a public reading—I remember being on a radio show where the host asked me to read one particular excerpt that was too personal and too traumatic to share. So I refused. I don’t want to constantly go back to it. I feel like it’s always going to be painful. But I feel that writing it once and getting it down and being able to look at it was important for me.

Going back to the album, a lot of the songs seem like they’re directed toward young women. What is the best way to empower young women?

I have three daughters, so I think you’re right that a lot of stuff I wrote is because I wanted to pass on what I’ve learned to my daughters.  I also have a lot of friends who are young women now. That happens when you’re older. You’re surrounded by young people who care what you have to say. I felt like I had a rare opportunity to share my own experiences. I remember being young and feeling like I was gonna make my own mistakes no matter what you say. So I try not to offer advice unless it’s something that someone asks me. Is there a specific song that you’re thinking about?

“Modern Day Virgin Sacrifice,” I wrote when I saw my girls—I have one daughter of my own and two stepdaughters—and my stepdaughters, I met them when they were three and five.  And I saw them go from being totally fearless, like any challenge was theirs. They were happy to make the world their own. When they entered their teen years, they started becoming a little insecure about their bodies—I felt like they took it all in, and they let the world force them to change. I didn’t like what I saw. I wanted to make sure to tell them they didn’t have to do that. So, I wrote that [song]. That’s actually one of the old songs on my record. Most of my songs are much newer.

“Modern Day Virgin Sacrifice” was about 10 years ago. It’s about body issues, specifically weight issues, but also because my own daughter has very dark skin, I remember having a conversation with her where we looked in magazines and we looked at the women that were in the magazines, and she was noticing that none of them looked like her. We talked about what that does to your self-esteem and how we need to find positive role models in the real world, people who are beautiful to us. Maybe because of the way they look or partially because of the way they look, but more importantly, because of who they are. So I had that conversation with my daughter when she was in elementary school, going into her teen years. I just felt like there was a need to talk to girls in general because we all went through that. I remember going through that, feeling like I wasn’t thin enough, I wasn’t pale enough. Plus I just had a different aesthetic. I was always interested in a more alternative look. I was always the weirdo that would dye her own hair and have it come out brassy orange and just try to rock that look.

Are there are any movements, large or small, where you think people are getting really empowered in ways that are punk, in the best definition of the word?

I can think of two right off. One is in L.A., we have an organization called the Ovarian Cycles. It’s a group of Chicana women that do bike rides. Their whole purpose is to talk to young girls and make them feel like they are powerful and that they can feel safe in the city. And to take up space and show visibility. The other is Girls Rock camps. I really think that Girls Rock camps are doing a good job of showing women that they can express themselves creatively. Which is huge—you have these different types of activism, and political activism is one, but also creative activism because you can speak to so many people. Having a voice as part of a band really helps young girls feel like not only that they can express themselves but that they can work cooperatively and they can have a sense of community. I’ve been working with one particular rock camp called Chicas Rockeras of Southeast L.A.  They offer scholarships for young girls in east L.A. For some, it’s the first time they’ve picked up an instrument. We show them how to use the instrument. Maybe not achieve complete mastery because it’s only a week, but have enough control that they feel like they can use it in a band situation and be part of the group and have an outlet for their expression.