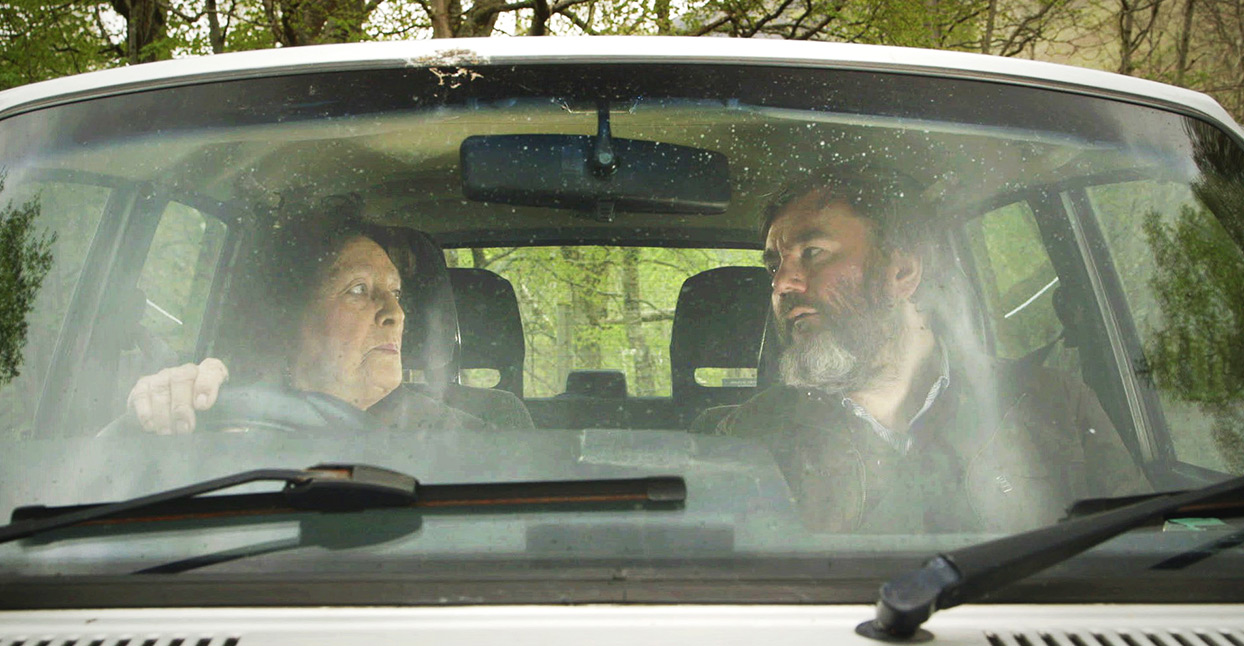 Back in the summer of 2014, Scotland was in the throes of a referendum to decide whether or not it should secede from the UK. The country was in turmoil. Vicious political rhetoric was given voice in the nation’s media, while its politicians scrambled to salvage some shred of dignity from the societal wreckage. In spite of this atmosphere—or, maybe, because of it—that was also the summer that Aidan Moffat of Arab Strap decided to record an album of traditional Scottish folk songs, altering the lyrics to reflect his darkly humorous take on modern living, and embark on a tour that would cover every nook and cranny of Scotland, from the banks of the Loch Ness to his hometown of Glasgow. The chaos that ensued is documented in the film Where You’re Meant To Be, directed by Paul Fegan.

Moffatt’s fascination with Scottish folk began with Sheila Stewart, a Traveler singer who became the face of the genre in the ’50s and ’60s; intrigued, Moffatt and Fegan tracked her down and included her in the movie. A feisty, no-nonsense woman, Stewart was initially very critical of Moffatt’s work, which she sees as borderline-blasphemous. The revision of songs that she has worked to keep alive for decades, suddenly defaced with lyrics about big city boozing and casual sex by an indie rock star, didn’t sit well with her, and she said as much during an excruciating car ride with Moffatt through the countryside. Ultimately, their push-and-pull, love-hate relationship becomes the fuel for the film, made all the more poignant when, as they’re finishing up the movie, Sheila suddenly passes away. What started as an experiment takes on new dimensions, as Aidan searches for the Scotland Sheila left behind.

So first off, how did this project go from being an album, to this sort of unconventional tour, to a documentary?

Moffatt: It started with the music. I was listening to Sheila Stewart one night, and that sort of sparked the whole idea of writing those songs. That’s where I started to learn more about her music, and I started to think it would be an interesting thing to try and put some sort of imprint on them. Paul used to be a music promoter, so I went to him with the idea of doing a tour, with a Scottish cèilidh, which was traditionally not a dance, but sort of like a talent show for a very small audience. Everyone would take a little time and do a song or read a poem, and the idea was to do a tour like that, get the audience to participate, and I would do a few songs. That was the original plan. But other things just happened—other jobs got in the way, and by the time I went back to Paul with the idea, he had started making films. So the documentary stemmed from that moment.

What is it about Sheila’s songs that you found so interesting? Was it the shared Scottish heritage, or the fact that they tend to be very lyrically dark and romantic, similar to Arab Strap?

Moffatt: Well, people have said that there was a folk element to Arab Strap stuff, which I never really understood. What was apparent right away was that sort of self-deprecating humor that Scottish people tend to have. We do like to wallow in misery quite a lot [laughs]. There’s was certainly something I could relate to in all the songs, but the humor was what struck me most of all, and that’s what we tried to keep in the tour. I tried to do as many of the funny songs as I could to keep it quite light-hearted. I wanted it to be more entertaining. Folk music always had that sort of austere reputation to me, it always seemed like people who went to folk clubs were people who just took themselves a bit too seriously. I wanted to make sure that if you came to the gigs, you’d have a good laugh.

The way the film portrays her is so moving, yet doesn’t pull any punches in regards to her tough character. Obviously, she passed away while the film was in production. At what point did you realize that she would play a central part in the narrative?

Fegan: I think it was quite late. With this film we tried to capture as many different characteristics of Scotland as possible, which meant involving a pretty broad range of characters. We were following several characters with the same intensity. But when she did what she did in the Barrowland, when she got up on stage of her own volition to sing that song herself—that moment gave us a nice counter to Aidan’s story. When we started to edit, after the whole tour, we recognized the importance of that scene, and felt that we needed to get more from Sheila, we needed to get more of her story.

When you started filming with her, did you expect her negative reaction to the songs? Her refusal to let it go definitely heightens that drama.

Fegan: We wanted to allow the viewer to see insecurity, which is something we can all relate to. We made sure that is wasn’t all glowing, perfect performances. It’s actually almost a puff piece for Sheila in that sense.

Moffatt: That was really important for me as well. You have to remember, we were going into these communities and talking about something that they hold dear. And I think that because they’re small, pretty bucolic communities, people automatically think that because we’re from the city, we’re going in with some sort of attitude—to sneer at them in some way. I think it was important overall that the only buffoon in the film is me! I’m the one that’s out of my depth.

Fegan: It was as much about making an anti-music doc as it was making one that kind of captures a much broader perspective. Twenty-fourteen in Scotland was quite an important year, so there was a lot of soul searching, and a lot of trying to understand the country. We really wanted to incorporate that into the film as well, to get a sense of the national identity. It was trying to make something that was a broader piece that would hopefully appeal to an audience that wouldn’t have necessarily come to the film knowing anything about Aidan or Sheila.

I think it achieves that, specifically because they are both such strong characters. Whose idea was it to introduce Sheila as she’s butchering a fresh rabbit in her kitchen?

Fegan: That was mine. I find that when you film people, it’s good to get them to do something that they’re comfortable with, that also reflects something of them and the world that they come from. We suggested other foods first, but Sheila loved the idea of skinning a rabbit for us. If the scene avoids you doing a sit-down, talking head-type interview, it can tell quite a lot about the person.

She seems right at home, that’s for sure. It’s funny you should mention the 2014 referendum, because you can definitely feel a sort of general tension throughout the tour.

Moffatt: It was a very interesting time. I mean part of the reason we did it, I felt, was very much a reflection of that soul-searching that was happening in Scotland at the time. Music became a way for me to learn about Scottish history. Most of the smaller shows were very hard work—you see it in the film. The first one, in Ness, was probably the worst, and by the time we got to Drumnadrochit, near the banks of Loch Ness, nobody could really be bothered with it [laughs]. We’d played a lot of small places, and it had gone pretty badly, and then here we are in a village hall where we had to set up the PA ourselves. We weren’t expecting anything from it, and it turned out to be the best night of the tour. It’s the night we used to make the album of the set. It just came as such a surprise to everyone, to suddenly be playing to an audience who didn’t know anything about it but who, for some reason, really took to it—the atmosphere was just brilliant. So that was a real turning point, because when you do something like that, obviously it energizes the band again, and we started getting more excited about it. The city gigs, we always knew were going to be quite easy anyway. The Edinburgh audience, the Aberdeen audience, we knew we already had, but I think Drumnadrochit was the shining diamond of them all, because it was a complete surprise to us and it went down so well. So it wasn’t all bad.

Right. And of course the kind of crescendo of the film is the last gig at Barrowland where, even watching the film, you can tell how well the show connected to the crowd, and how good the songs had gotten by that point.

Moffatt: I’ve always wanted to play the Barrowland.It’s one of the best venues in the world. The first gig I ever went to was there. It was surprisingly easy, I think because we did all the hard work with the smaller gigs. When you walk into a room of that size and you know that most people are there to see you, then obviously you have a lot more confidence, and it showed in the performance. We definitely felt that that was the gig we were building up to all the way through.

Fegan: The Barrowland was the big one. The thing was, pretty much every location we chose, we did so for a particular reason. There was a story behind the location, or a character who was in some way relevant. With the Barrowland, it’s the venue to play, certainly within Scotland. All the biggies have played there. It was a dance hall in the ’60s, it just has this rich history. In 2014, it was the venue’s 80th birthday. It just tied into this sense of tradition and storytelling that we were trying to explore within the film.

It seems like that show, as well as the movie as a whole, is really one long love letter to your home country.

Moffatt: You know what? I don’t think Scottish culture has changed that dramatically in the sense of who we are. I was very quick to find myself in those old songs. These songs came from a working-class background where people had to make their own entertainment. That sort of folk culture is definitely well behind us, and won’t exist again. And it wasn’t just that music that died with Sheila—I mean, the whole Travelers’ culture is also disappearing. I suppose what I am trying to say is, though these things may change, the Scottish attitude seems pretty ingrained.

Fegan: A lot of the film and television that comes out in Scotland tends to dwell on the darker side of the country. So it was really about reassuring ourselves, and hopefully others as well, that these are the qualities that are more in tune with the Scotland that I grew up living in. Coming across those as we traveled was a nice takeaway for me, at least.

Moffatt: It’s a peculiarly upbeat and cheerful film for a Scottish documentary, which is a rare thing in itself. But it’s also a film about death! So that’s very Scottish in itself. Aye, aye, I think it’s more reflective of the country we come from.