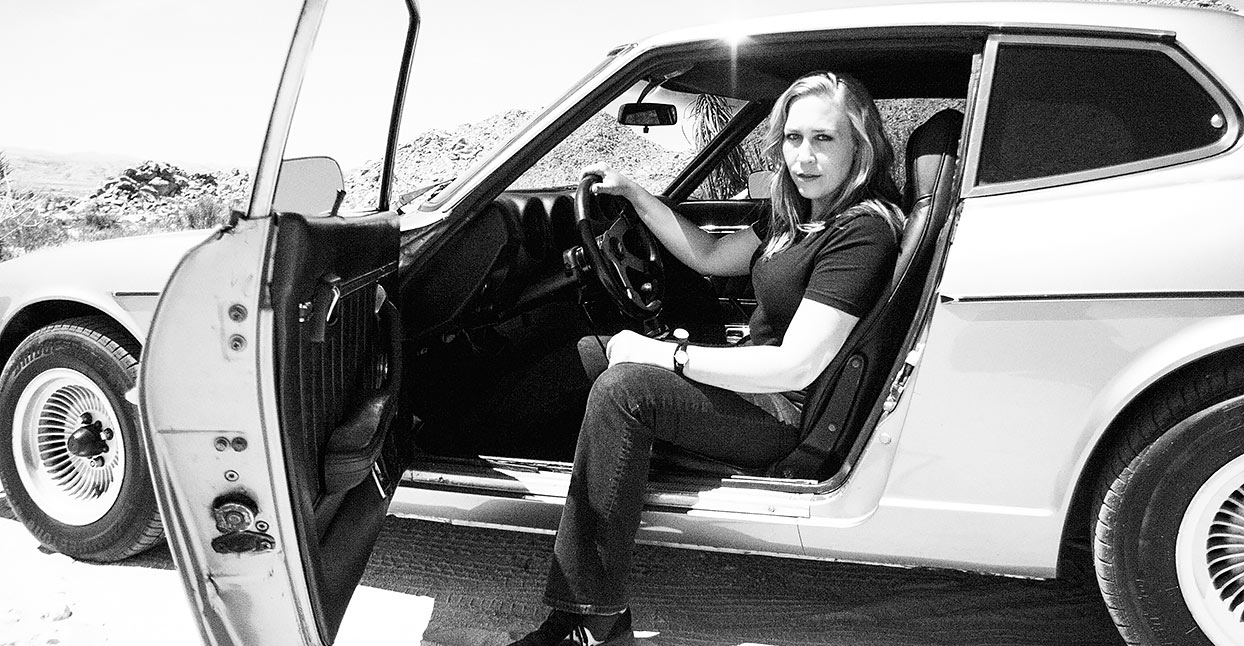 On a sticky, sun-drenched early evening in late July, Adrienne Davies is scrunched down low behind her hybrid Ludwig/Gretch drum kit, smiling, weaving her arms and legs in an intricate pattern. As she slams on the snare—which she does so infrequently it almost seems like she’s deliberately avoiding it—her eyes widen. She moves so slowly that it looks like she’s performing underwater aerobics.

She’s on stage at the Mohawk in Austin where her band, Earth, is opening for their good friends Boris on a U.S. tour commemorating the deluxe reissue of 2006’s Pink. Aside from being unspeakably hot, the show is also going to be loud, long, and slow.

At one point mid-set, the heat causes a local doom-bro to collapse on the concrete, as if gravity and Davies’ thudding bass drum are psychically commanding him to find cooler ground. As the venue’s staff drag him safely to the wings, the trio on stage is still locked in a hypnotic trance. They carry on, playing “Ouroboros is Broken,” a beautifully demented eight-minute dirge. Davies either doesn’t notice the fallen soldier, or is so locked in to the song’s heaving forward motion that she can’t break off, keeps the momentum going. She’s in control.

At a certain point about 50 minutes into their hourlong slot, Davies turns to guitarist Dylan Carlson and flicks her wrist horizontally across her throat, the universal symbol for ‘we’re fucking done here.’ Carlson, the only original member of the drone-doom band, is a Pacific Northwest legend, and onetime roommate of Kurt Cobain. He’s also, publicly at least, the face of Earth. But right now, the backbone—and, lacking a live bassist at the moment, the sole member of the rhythm section—is running the show. She’ll tell me on the phone two weeks later that it was so hot that night she was seeing sparkles.

The slowest drummer alive, Davies is an oft overlooked but absolutely essential component to the doom machine that is Earth. Because Davies does what she does at such a slow tempo—and yes, also because systemic sexism pervades both rock music and, speaking frankly, global society—what she does could be considered rudimentary, mere background to Carlson’s unwavering shredding. But Davies is not only Earth’s core—she’s one of the most methodical, reliable, and skilled percussionists in rock music today.

Born in Baltimore, Davies had to fight—physically, she says—her four brothers to get time on the family’s single drum kit. With hippie parents and a metalhead older brother, she forged both a drumming style and an ethos that she carries with her to this day. “I always thought drums were one of the instruments where people tended to showboat and do way too much,” Davies says, on the phone between Chicago and Madison, WI. “It detracts from the song. You always have to serve the song, otherwise it can be hard on the ears. I always wanted to make pretty drums.”

Davies, who has lived in the Pacific Northwest for the past 33 years, met Carlson when she was 17, but didn’t join Earth until over a decade later. She bounced around playing in what she calls “crappy, fun, shitty” hardcore bands, like the Flipper-influenced mid ’90s Olympia two-piece Hot Puke, but “didn’t seriously commit to a band” until Earth. Davies and Carlson reconnected and began dating in 2000 and, shortly after, the two began playing music together—though not as Earth. Carlson, in the throes of heroin addiction and still reeling from his close friend Cobain’s death, put the project on hiatus in 1997. As a guitar-based drone band since their inception in 1989, Earth has never needed a drummer. That soon changed.

“It was therapy music, in a weird way,” Davies says, of that time. “One thing led to the next.” Earth toured the East Coast as a two-piece in 2003, playing a recontextualized version of the band’s trademark doom metal, though Davies’ drums provided some traditional form for Carlson’s famous drone guitar work. The culmination of this marriage of styles was 2005’s Hex; Or Printing in the Infernal Method, nine tracks—one for each year Earth didn’t release an album—of molasses-slow mutant country metal, like a sun-warped Ennio Morricone 45 playing at 33 ⅓ RPM. Longtime fans were surprised. Gone were the 27-minute tracks of unmitigated shredding, replaced by fully formed Western-tinged suites and even—gasp!—clean guitar lines (fans made an immediate connection to Carlson’s newly clean lifestyle). With album art that featured a sepia-toned barn and farm animals, Cormac McCarthy phrases as song titles, and auxiliary instrumentation like tubular bells and pedal steel, it was clear that the Earth of the early ’90s was, if not dead, then reanimated in a different skin. Davies’ Earth debut was met with almost universal acclaim.

“We were listening to a lot of older stuff then—country, older R&B,” Davies says, of the group’s musical shift. “You can’t put pedal steel on everything, but it was perfect for Hex. And any chance you get to have Dan Tyack [play on a record], you take it. ”

Naturally, the band’s next move was to take a few songs from Earth’s early drone days and give them a proper Hex induction: Hibernaculum, a four-song EP that is, given the tempo of a typical Earth song, LP-length. It’s a line in the sand drawn by Carlson and Davies, meant to indicate that Hex wasn’t a fluke, or a one-off musical shift. It’s also, predictably, Davies’ favorite material to play live, a crystallization of her time spent as an Earth fan in the early ’90s coupled with her newfound influence on Earth’s musical direction.

“Dylan has tried to retire [‘Ouroboros is Broken’] many times,” Davies says, laughing. “I’m partially responsible for digging it out again. [I like] taking the really early Earth stuff, from before I was in the band, and re-approaching it, like ’Coda Maestoso.’ One of my favorite Earth songs was ‘Miami Morning Coming Down.’” These three tracks comprise 75% of Hibernaculum.

Davies, influenced by punk and metal drumming but also by ’70s session players like Steve Gadd and Jim Keltner, created a style for Earth’s rebirth that was wholly her own. It comes through on their records, like 2014’s return to heavy Primitive and Deadly, but it’s even more apparent live, where Davies is fully aware that she has to create her own lane in order to fully stand out.

“When I was developing a drum style for Earth, it was very much done to fit in with the music and to serve the songs—not to detract, but to add,” Davies says. “I was very conscious of that recording and playing live. I think you also don’t want to be a one-trick pony. You don’t want it to be like, ‘Oh, that’s the girl that plays really slow.’”

Davies has fine-tuned everything, from her pre-show routine to her kit setup, in order to maximize both her body’s energy and the economy of motion while she plays. She calms herself completely before every show—the natural inverse of musicians getting psyched up for a live performance. When you’re playing proficiently, and at a snail’s pace, it pays to have a heartbeat that beats as slowly as your right hand glides along the ride cymbal.

“I noticed how impossible it was to play music that slow, [with that] relaxed of a backbeat. If you go too slow, you lose all momentum and there’s no groove to it,” Davies says. “To get it as slow as you can get, but still have your momentum… the way I get that is to center, and envision what I’m doing before I do it. It’s meditation, in a weird way. If you can calm your physical self—your body, your heart, your cardiovascular system—there’s nothing stopping you from getting the right feel.”

Davies also learned over the years to take all of the things was taught coming up as a drummer in punk and hardcore bands—where the objective is to minimize motion in order to play as fast as possible—and do the opposite. The slow dance she does when playing live, her body rocking as slowly as a hypnotized snake, her arms cutting a labyrinthine path around her toms before she strikes—it’s all intentional.

“I’ve kind of developed my own thing. What I’m doing is very circular; there are no right angles. Even the way I set up the drum set isn’t for economy of ease of movement. It’s for making a forced drag,” Davies says. “You’re wasting movement. It wouldn’t work for anything else, but for very slow stuff, I’ve found that really helpful. I’m not trying to be theatrical, but it’s the way I’ve found that works the best.”

Two weeks before, at that Austin show, Davies misfires exactly once, knocking the rim of her snare drum. The only reason I notice it—the only reason anyone possibly could have noticed it—is because of the precision with which she wields her two sticks on a nightly basis. It’s a double-edged sword: Davies has galaxies of empty space in which to play, an open-ended field of possibility. But it also puts her on an island, and affords her zero leeway in the way of mistakes. Therein lies the weight that falls on Davies’ shoulders at every Earth show.

“It’s really about feeling comfortable enough in your skills as a musician to not have to think about it. It has a life to it—a buoyancy you strive for,” Davies says. “Not every live show has that, but that’s my favorite part of playing live, and why I’m smiling. When you hit that magical subconscious zone, where you’re almost not even aware that you’re there—it’s weirdly kind of close to spiritual. It’s an amazing feeling. It gives you a lot of leeway to get weird.”

When Davies strikes the rim of her mahogany Ludwig snare, I watch to see her reaction, expecting a look of horror. She just gives her now ex-boyfriend Carlson a goofy grin, raises her right arm, and slams it down on the ride.