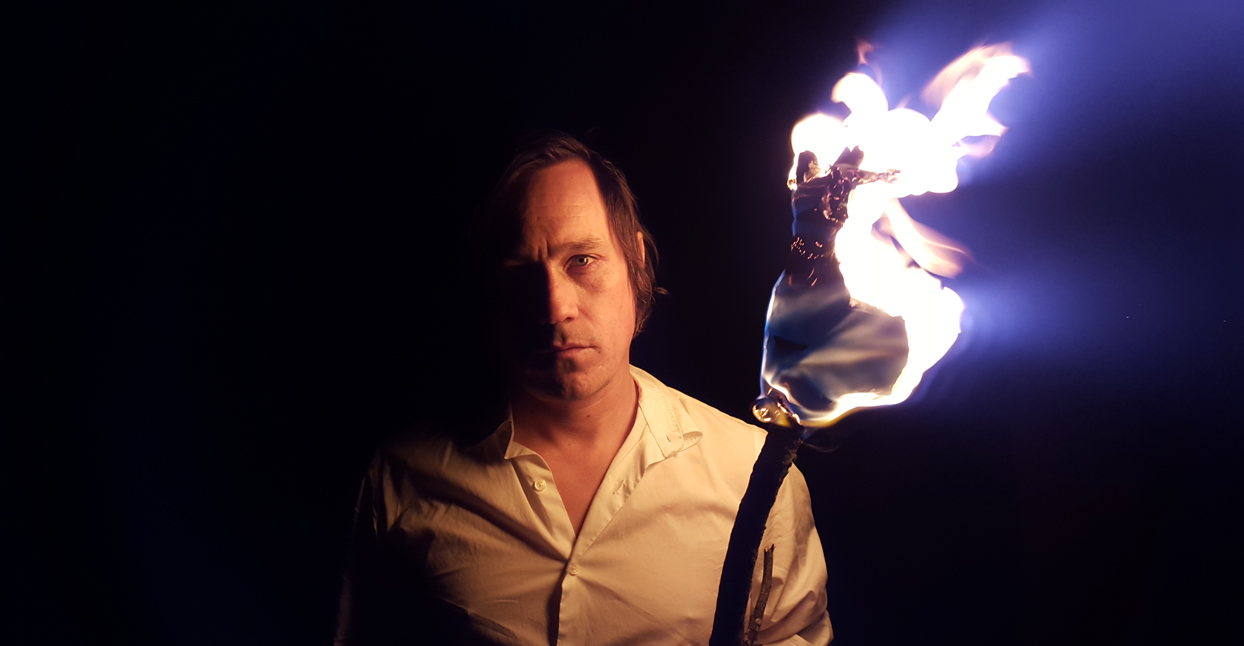 Though the final product can take on a host of different forms, at heart, Adam Gnade is, at heart, a storyteller. In his music, he distills fragments of his life into what he calls, “talking songs,” which he delivers over a wide range of musical accompaniment, from the tense post-punk of his collaboration with Youthmovies to the stark acoustic chords he strums in his solo work. As an author, he has written everything from fiction to self-help guides, instilling each with a sense of sincerity and wonder.

Gnade’s latest release, Life is the Meatgrinder That Sucks In All Things, combines two of Gnade’s artistic pursuits. Part song, part audiobook, Meatgrinder is set in the days just before September 11, 2001, and centers around a group of characters who are all on the cusp of a big shift. Gnade’s words are accompanied by a spare and haunting soundtrack by the trio Planet B, which includes Justin Pearson, founder of the label Three One G. A 25-minute movement that takes up all of the cassette version’s A-Side, Meatgrinder serves as an audio prequel to Gnade’s 2016 novella, Locust House.

Meatgrinder begins en media res; the first sounds that appear are a dark, whooshing rush of instrumentation before Gnade appears to give voice to the story’s character and narrator Joey Carr, who has appeared in several of Gnade’s previous works. Even though the story takes place over a decade in the past, its themes of resistance and lost innocence are an eerie parallel to the current political climate.

We caught up with Gnade to talk about his writing process, how advice from Richard Hell helped create a blueprint for his current artistic pursuits, and the value of storytelling in dark times.

There’s a line in Life is a Meatgrinder that goes, ‘Your enemies are always louder than your friends, but that doesn’t mean that they matter more. Don’t let the shrieks of horror drown out the kind voices.’ Would you say that philosophy is you speaking through your characters? Or is it just representative of who they are?

I’m definitely speaking through all my characters at some point. I mean, I’ve had a lot of different characters throughout the book and my records that all connect. In some way, they’re all a little bit of me. The great thing about fiction is that you can let your characters say things you want to say. In this story, and usually when it’s the character of James [one of the book’s two narrators—ed.], that’s as close to my own self as any of the characters are. With this book, these are all things that I’m trying to say that I want people to hear.

Another quote that stuck out to me is spoken by the character Michael: ‘Enjoy life violently, but never be violent.’ Do you try to modulate the advice to fit each character?

Yeah, all the characters, obviously, are coming from a different place. Some of them, I’m using as a chance to say certain things, and some of them are giving bad advice, or advice that I don’t agree with. But everybody’s got their own philosophy. I kind of want all my characters to be different from me, but also there’s a bit of propaganda in there, in the sense that I have some ideas that I want people who read my stuff or listen to my stuff to take away from it—even if there are characters that are anti-heroes, or who might give the reader advice that’s not that great to take.

This book is technically a prequel to Locust House. Did you sketch out a backstory for the characters before you wrote Locust House? Is that how Meatgrinder came to be?

I’ve got a basic structure for all of these stories, and I kind of have an idea of where the characters are going to go. I wrote Locust House first, but while writing Locust House, I had the storyline for this one in my head. I knew that the characters would do certain things, and that this is what they’d be going through. Usually when I write the books, the first draft is usually three times longer than the final product. Locust House had a lot more to it, and because I wanted it to be a better book, I cut a lot out. Meatgrinder is set right in the days before 9/11, which is kind of a pivotal storyline in Locust House, which deals with loss of innocence and change.

I really like writing about moments before change, whether it’s the moments before or after. For Caveworld, I wanted to write about what it was like before the Internet was controlling us so much, and everything was so tied into social media. So the characters in the book in Caveworld have the Internet, but it’s not a big part of their life. I wanted to write almost this pre-technology book. Locust House is sort of after 9/11, and it’s about how things changed after 9/11. So the prequel is right before things changed, and how different life was. I’m writing a new book right now, and I don’t want to say too much about it because it’s not done, but I wanted to write a book that’s like, pre-Trump. This book that I’m working on right now is set in 2014. I want to write a book about how things were different then. That’s one of the things I’m really interested: the moments before things change, and the moments after things change.

Do you feel like part of what interests you about change is this idea of ‘lost innocence’?

Definitely. I feel like one thing that I’ve noticed in my life is a change in innocence and a change in life’s simplicity. Like, you feel like things are hard in 2014, and then you look at 2017 and you’re like, ‘Oh my God, we had it so easy.’ Maybe it’s because things have gotten progressively weirder and harder and darker. This has been a crazy time to be alive. Hopefully something good comes of it, but it feels like things are getting harder, and things are getting darker. This country is a strange and precarious place—just a hard, cynical, scary place where everybody’s worried, and everybody’s afraid.

You draw upon your experiences for your work and, of course, the characters you’ve written take on a life of their own. Do you feel to some extent that these characters are as close to you as relatives?

Oh yeah, definitely. Which can be a problem, because in my new book, I initially killed off one of my characters, and then I just couldn’t do it. I turned back and I was like, ‘I like this character so much. I can’t do it.’

There’s a documentary about John Cassavetes where he’s making his movie The Killing of a Chinese Bookie, and in the documentary, one of his producers was talking about how they were all out at a bar or a restaurant or something, and Cassavetes was like, ‘I can’t do it. I can’t kill the bookie. I like him. I’ve spent enough time with him now. We can’t kill him. We have to do something else with this movie.’ And the producer was like, ‘This movie is called The Killing of a Chinese Bookie. You have to kill him. This is essential to this.’

You grow to like your characters. I try to write characters who are pretty human. Some of them are jerks, but I also wanted to write a couple characters you love and root for, that you believe in, and that are noble and kind and just. I’ve written a couple of characters like that, where I don’t want them to even get a papercut.

So you knew where you wanted this story to go, and you knew essentially what had come before, but when you were first starting out, did you know that you were going to tackle Meatgrinder as a talking song?

I knew that I was going to do that. At first, I was thinking it was going to be an audio book. I think there’s a lot of people that aren’t into reading, but they still like literary stuff, and they have podcasts or whatever they like.

When I was younger, I used to write letters to Richard Hell all the time. I would ask him advice, like, ‘I want to write poetic works, but how do I make a living doing this? I don’t come from a rich family. I don’t have anything to fall back on. I’ve got to make it happen or I’ve got to think of a different career.’ And he was like, ‘You’re going to have a hard time making money writing poetic works because most people don’t want that.’

But he wanted to do the same thing, and what he did was, he started a band—Richard Hell and the Voidoids—and his poetry was sung. He knew that people weren’t going to read poetry, so he made records. I was like, ‘I should do that—I can make this part into two verses, make it nice and short.’

In times like these, what do you think the cultural value of stories and storytellers is?

One of the most important things for me, whether a story is political or if it’s just totally personal, whatever it is, stories are what we tell to give us a little bit of light in darkness, and make us feel less alone. They connect us to our culture, to remind us who we are. For a while, I freaked out about writing literary works. I was thinking, ‘God, I should just go quit and be an activist and fight for social justice and things like that,’ and then I realized some of the most important and fundamental things that saved me over the course of my life have been stories that have reminded me that we’re all dealing with hard things. We’re all just people. And I think stories are good. We were telling stories around the campfire, in primitive situations. It’s probably one of the first things we did. It connects us to who we are.