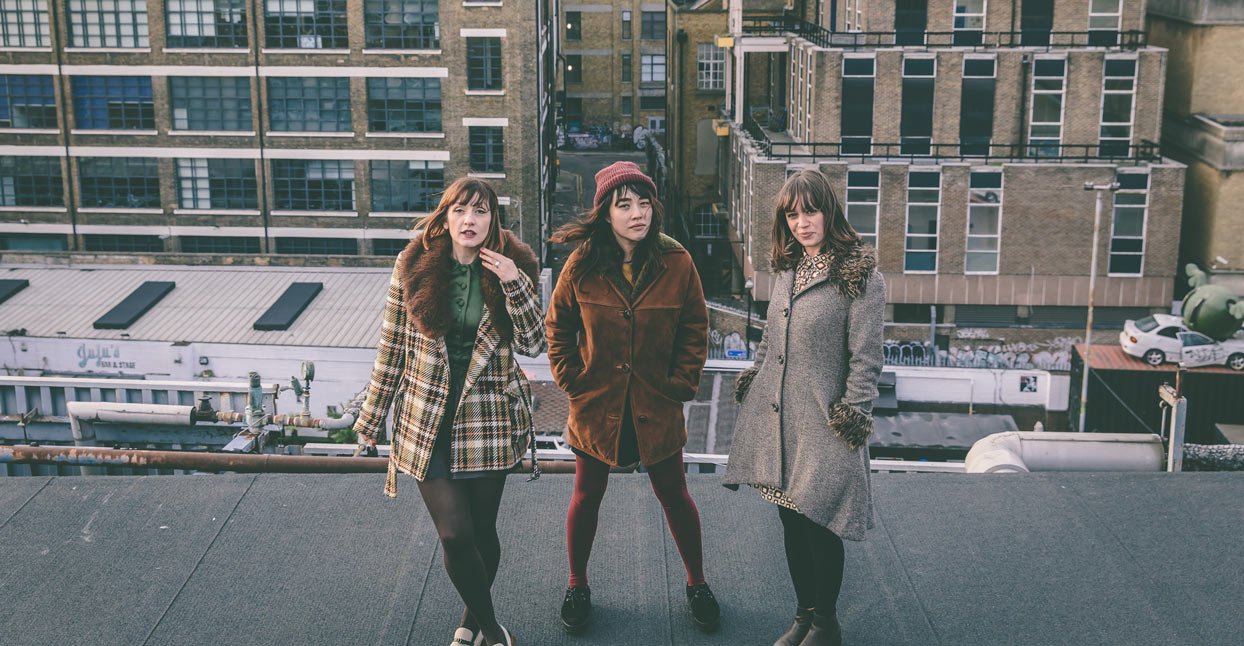 The upstart garage punk trio Abjects—with members who are known solely by their first names—have a global outlook that’s as sunny as it is realistic: Yuki (bass/vocals) comes from Japan, Noemi (guitar/vocals) from Spain, and Alice (drums/vocals) from Italy. They make anthemic music in English and Spanish, with broad lyrics that stress keeping your chin up and having fun. The music video for their recent single “Never Give Up” features the band members ditching their day jobs and chores to play music with each other. Together, with instruments in hand, they triumphantly sing, “We’re gonna fool around and take another chance / We’re gonna share a bit and have some fun!”

Accordingly, their debut album of the same name, Never Give Up, is filled with songs that give a much-needed shot of endorphins while still acknowledging the harsh realities of the world. The band’s blissful take on garage rock pairs three-part harmonies (that bring to mind Vivian Girls) with chugging, no-nonsense chords reminiscent of The Sonics. The lyrics, in classic twee-pop style, tackle sobering topics ranging from Brexit (“Fuck Brexit”) to emotional intimacy (“The Secret”).

For Abjects, the appeal of this tried-and-true style of music is partially owed to its accessibility; after all, one needn’t be a prodigy to play in a punk band. “We didn’t know how to play our instruments very well,” admits Noemi, “so we went for [influence in] bands that didn’t know, either. And they just made whatever they could with their abilities, the skills they had.” As an all-female, multilingual band, they recognize—and actively challenge—the subgenre’s long-standing associations with white, male gatekeeping: “We tried to give [punk] our own personal style, ’cause obviously, most of [the punk canon] are male bands, and they talk about things from a male perspective,” she continues. “We try to translate—get about their point of view and make it our own.” (Noemi doesn’t use the term “translate” for nothing: she sings two the album’s highlights, “Mañana” and “Aburrido,” entirely in Spanish.)

Whereas Noemi’s mission statement scans as the spoken equivalent of reaching across the aisle, Never Give Up is more of a well-deserved slap to the face. Take “Fuck Brexit,” a scorched-earth shredder that, with its jittery riffs and disembodied harmonies, mirrors the existential uncertainty gripping many in the U.K., including Abjects’ members, who make frequent trips back home to their respective homelands.

“It’s gonna become more difficult for us to be here [in London] to meet. It’s getting more intense with the visa situations, bureaucracy all around, so it was important to talk about it because it’s something that is affecting us,” Noemi says. A similarly-forlorn mindset guides the spacey “A Long Way To Go,” which has the whole band issuing a sober proclamation over a surfy instrumental: “We can only try to make it through this very long road.”

Still, the band doesn’t dwell on being downtrodden; on “The Secret” the band pleads, “What’s making you sad? Why can’t we talk about the things that are going right?” In a world where bigotry is rampant, sometimes lightheartedness can be a lifesaver—and Abjects have plenty to spare. “We want to keep a positive attitude, and feel that we are going to be able to get through it anyway,” Noemi says.