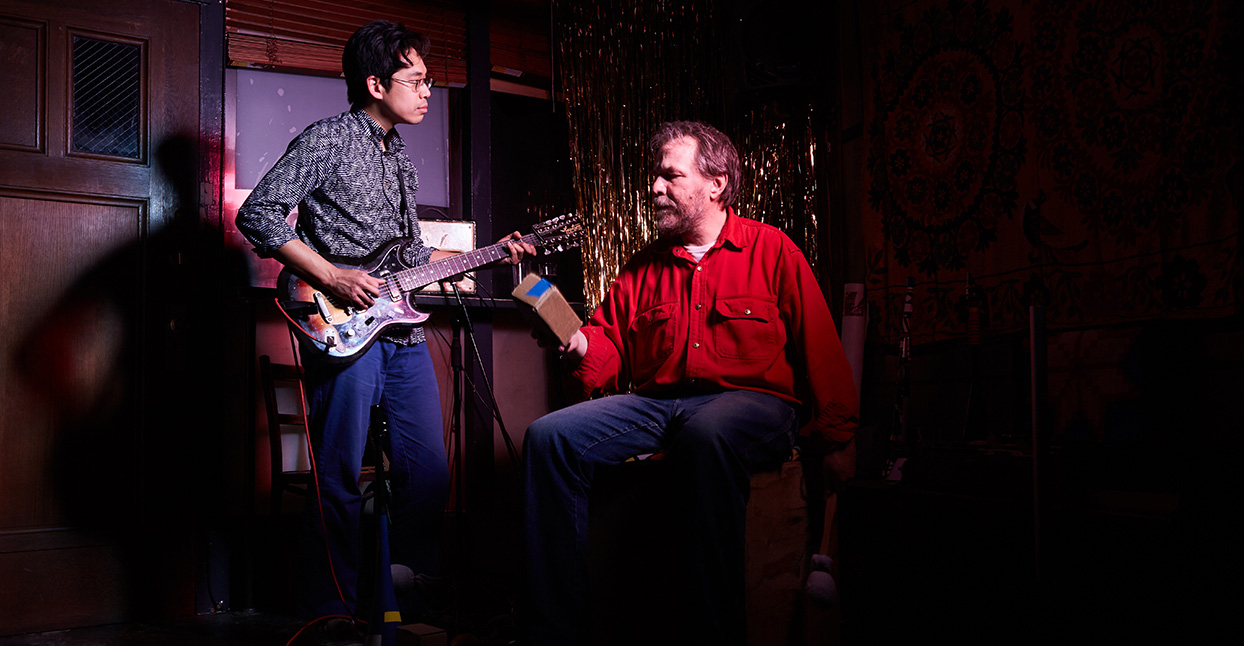 A few years ago, Rick Brown was walking down a New York City street when he noticed a wooden box sitting untended. Most people in this situation would keep walking. But Brown is a drummer, and he wondered what the box might sound like. “I went right over to it and hit it with my fist,” he recalls. “It sounded good and, combined with my natural pack-rat tendencies, that meant I had to have it.”

The box sat on a shelf in Brown’s home for a while, until he started playing it in impromptu group jams, striking its sides with a mallet while seated on top. One of his fellow jammers was guitarist Che Chen, who was mulling over ideas for a new project. “I was starting to play in a more riff-oriented way, and I wanted to do something that was rhythm-centric,” Chen remembers. “As soon as I heard Rick playing that box, I thought, ‘That’s the sound.’”

In 2012, Brown and Chen began playing together, naming their duo 75 Dollar Bill. “When we first sat down, it was like, ‘Boom!’” Brown explains. “We played a lot in a short time and made up a bunch of stuff really quick.” In the four years since, they’ve filled five releases with hypnotic, Zen-like instrumentals, some of which last as long as a half hour.

Chen’s curling guitar lines bear the influence of many international styles, including those he gleaned from lessons with a teacher in the North African country of Mauritania. Brown’s drumming—honed through his years in New York bands going back to late ‘70s No Wave (including Run On, with Alan Licht)—is rock-solid, yet always evolving. Though 75 Dollar Bill’s music feels impulsive, it’s not strictly improvised. Every song is based on a nugget of an idea, be it a single riff or a full melody.

On their new album, Wood / Metal / Plastic / Pattern / Rhythm / Rock, the duo are joined by a host of guests, who add trumpet, saxophone, contrabass, and viola. Similar collaborations dotted previous 75 Dollar Bill recordings, but the integration is deeper this time, adding density to songs that have been around since the band began. “I’m surprised and excited at how adaptable what we’ve got at the core has been to these expanded lineups,” enthuses Brown.

The best example is the album’s closing track, a 15-minute journey called “I’m Not Trying to Wake Up.” As Chen and Brown build a ringing loop, their accompanists insert wide tones that make the song sound three-dimensional. Part of that expansive aura comes from what Brown likes to call “compound rhythm.”

“It’s a way of playing what might appear to be complicated rhythms by using the simplest element,” he explains. “In that song, it’s a pattern that’s 18 beats long, but it’s built from components that are three and four [beats]. And once you do that, you look at different ways to divide that same period of time with those same simple numbers.” Chen notes that the vibrant blocks on the cover of Wood / Metal / Plastic / Pattern / Rhythm / Rock correspond to this compound beat: “It’s an 18 by 18 grid, and every vertical column is a different way of dividing 18.”

That may sound like heady stuff, but the resulting music is refreshingly uncomplicated. Both Brown and Chen place a premium on simplicity. “The limitations of the wooden box work well for my playing, which is a lot of modal, simple pentatonic scales,” Chen says. “I’m just doing what I’m capable of doing. I’m not a schooled musician. I don’t have a good grasp of a lot of technical things outside of what we’re working on.”

“I was always the one in my groups who was playing the simplest stuff,” Brown adds. “‘Elemental’ is the word that I use a lot. Drummers often talk about rudiments in practicing their paradiddles, but to me the real rudiment is the simple ‘boom,’ when you just hit something with something.”

This emphasis on simplicity, combined with a preference for what Chen calls “more of a folk volume than a crazy rock volume,” has made 75 Dollar Bill well-suited for street busking. They’ve only done it a handful of times, but it has produced some of their most memorable moments, especially a 2013 sidewalk jam in Chinatown immortalized on YouTube.

“We stumbled on a cool spot, both for the sound and in terms of a captive audience,” Brown says. “After we set up, this fruit salesman showed up, and there was a crowd of people standing in line to buy fruit, so they had to hear us. They weren’t mad.” Adds Chen, “He had these helpers who were unloading produce and then crushing these cardboard boxes behind us constantly, which was a nice added percussion element.”

Brown’s own percussion element, the trusty wooden box, has gotten so much use that friends worried it might crumble. So he had his brother construct a replica—but it didn’t quite work. “I realized that the number of plies in the plywood is extremely important,” Brown explains. “There are all these factors that I couldn’t really recreate, because I couldn’t find exactly the same wood.” Eventually, another replica made in Amsterdam during a European tour sounded close to the original. Its wood has since been combined with his brother’s to form the box Brown now uses most, though he still breaks out his original from time to time.

Perhaps that box will always define 75 Dollar Bill to some degree. But as their sound continues to expand, it’s clear that their music will never be reducible to any single element. “We’ve got so many ideas for directions to take this,” says Chen. “It just keeps propelling itself that way.”