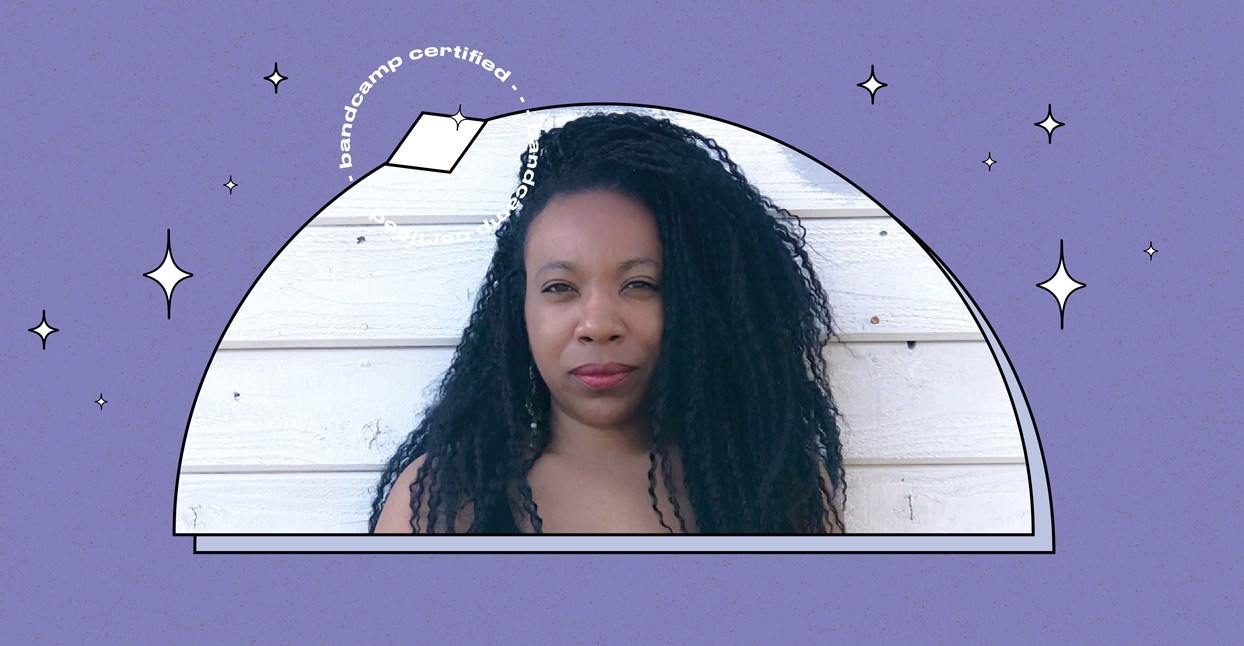 Certified is a series on Bandcamp where we spotlight artists whose work we think is worthy of additional attention. You can also listen to an interview with Tenesha The Wordsmith on Bandcamp Weekly.

On August 5, Pulitzer Prize-winning novelist Toni Morrison died. It was a devastating loss to the world in general, but it hit Tenesha Smith particularly hard. The teacher, poet, and spoken word performer had discovered Morrison’s novels as a teenager growing up in Oakland, California. She recalls poring over Morrison’s Beloved more than once, trying to fully absorb the layers of depth, history, and magic of Morrison. Days after the icon’s death, Smith, aka Tenesha The Wordsmith, still finds herself thinking about Morrison’s momentous impact on her life.

“Toni Morrison talked about the spiritual aspects of being a person who is black,” says Smith. “In Beloved, she spoke from the spiritual realm—places that are not just of our flesh but our spirits.”

Talking about books is comfortable terrain for Smith. It was reading writers like Morrison that were integral to Smith’s evolution; Langston Hughes’s profound question “What happens to the dream deferred?” caused Smith to think about the lives and dreams robbed by racism and inequality. Octavia Butler’s futuristic fiction inspired Smith to see a black future of unlimited freedom and empowerment. Lucille Clifton taught her finesse—“How to utilize different styles of poetry by experimenting with line breaks, lengths and storytelling”—while Piri Thomas taught her that it was OK to be passionate and emotional about your work, and to reveal to audiences the things that inspire you. And then there was Gwendolyn Brooks, whose words illuminated the idea of young womanhood for Smith, back when she was a nine-year-old bookworm longing to be understood.

“I didn’t see myself reflected very often, and when I did it was often negative or marginal,” Smith says. “These writers put my experiences and thoughts on paper in a way that I had never seen before. They crystalized who I was.”

When she was a child, Smith would “write in the margins” of books that were gifted to her by members of her family. At 11, she attended a summer camp in Norcross, Georgia. When one of the teachers asked students to write about their camp experience, Tenesha The Avid Reader became Tenesha The Wordsmith.

“No one had asked me to write about my experiences before,” Smith says. “I thought about it, and wrote about ladybugs, watching them crawl on logs, raccoons and squirrels and disturbing their peace. I really got into it.” Impressed by the vivid story, a camp counselor told Smith’s mother that she had a budding writer on her hands.

From that moment on, Smith started using writing as a way to navigate the world around her. Living in Oakland—a city she says is essential to who she is—made her aware of the city’s sensory overload. “There was access to everything, which was sometimes a good thing and sometimes a negative thing,” she says. While Oakland offered beauty—the museum, public library, lakes, parks and hiking trails, as well as a plethora of black-owned businesses—there was also violence, drugs, and a culture of prostitution.  Writing helped the 13-year-old Smith process those dichotomies. “As a teenage girl I learned how to filter—to filter what was good for me, and what I wanted to internalize, and things that were not necessarily good for me, things that I wanted to keep external,” she says. Her reputation as a bookworm also earned her some surprising allies.

“I met women who were prostitutes—by virtue of living in the same community, it is not unusual to meet people who are considered criminals—who told me that they admired me and wanted to see me do well, and they respected me as a young woman. I think the stereotype is that people who commit crimes try to pull everyone into doing the same thing, and that’s not necessarily true. It was an atmosphere where people were, ‘Look at that girl, she loves to read.’ They were proud of me.”

As an adult, Smith moved to Albany, New York where she began collaborating with hip-hop artists like JB (aka Dirty Moses) and Emcee Graffiti, as well as R&B singer Anneice Cousin and singer/poet Luis Pabon. She also produced shows that spoke to community needs, like Artist United, an event that featured local artists from different genres to raise money for The Albany Arts & Literacy Center, and themed shows such as The Cotton Club Comes to Albany, a 1930s Harlem-inspired night. She also established the recurring open mic showcase Do You Thursday featuring various musicians and poets. Those years were instrumental in helping Smith cut her teeth in the spoken word scene.

In 2016, Smith released her debut album Body of Work, an unflinching look at intimate violence (“My Best Friend Has a Secret”), innocence lost (“Bring Back Our Girls”), and misguided competition among women (“Good Pussy”). The album was both a diary and a manifesto, a chronicle of Smith’s own life experiences and those around her, as well as a call for empowerment. It was a lesson she learned from her maternal grandmother whose confidence and unapologetic self-love inspired her as a young girl. It was that same confidence Smith tapped into after a teacher, admonishing her for getting an answer wrong in class, aggressively grabbed her braids and marched her up to the chalkboard.

“I remember at that moment thinking I wasn’t going to allow people to treat me like that again,” Smith says. “Even as a little girl, I knew that that was not OK. Standing up for myself—for my dignity and my humanity—was natural to me, because of watching my grandmother. She didn’t take crap from nobody. It wasn’t just about being a black woman, it was about, ‘No, I don’t have to allow you to cause me harm. I’m going to say something.’” Today, Smith, an educator herself, teaches students from elementary school through high school and makes her classroom a place where children are seen and respected—and are taught to do the same for others.

Smith’s 2018 song “Madea/Dangerous Woman” drew on that mindset of respect and empowerment. It was a celebratory ode to unapologetic women, one in which Smith gleefully spoke the words: “Jesus didn’t come to change you / He came to make you divine / God loves hoes like us.” But for as introspective as Bodies was, Smith’s latest album, Peacocks & Other Savage Beasts, goes even deeper, delving into some of the darkest moments of her life.

Shortly after her recent move back to California, Smith unexpectedly stumbled across the place that had changed her childhood forever—the apartment building where her mother was stalked, raped, and almost killed by a stranger. “There was the building,” she says. “There was the liquor store where the man probably saw her. Everything was the same. I was at the intersection, and I just sat there. It shocked me.”

Smith recalls the devastating aftermath—especially the ways that people blamed her mother’s appearance for attracting the man’s attention. “It made me realize how traumatized I was from the experience,” Smith says. Even though it didn’t happen to me, the trauma had this ripple effect for everyone—for her children, for the people who loved her and saw how she was affected. Nothing was quite the same. Nothing was quite as safe. I was putting Peacocks & Other Savage Beast together, and that song became the title track because I realized that the album does deal a lot with trauma. That wasn’t my intention, but that’s the way it developed.”

“I will only tell the part of the story that belongs to me,” says Smith on “Peacocks,” describing curse words as “city sounds,” and the corner store where the men would harass her mother. The sound of throbbing beats against Smith’s stoic voice grow more chaotic as she speaks, adding a sense of threat and anxiety even in the midst of the song’s beauty. [Note: Smith’s mother gave permission for her story to be shared in this story in order to help other rape surviors feel less alone.]

This isn’t the only darkness Smith stares down on the record. Nothing—not misogyny, inequality, family, spiritual exploration, love, sexual abuse of children, or mental illness—is off limits. Along with “Madea” and “Dangerous Woman,” her sophomore album includes tracks like “Why White Folks Can’t Call Me N*gg*,” which calls out white racism for its exploitation of, and brutality towards, the black community, and “Again,” a song about the end of a tumultuous relationship. DJ Khalab created the lush beats that frame Smith’s words in a cocoon of African dance beats and dazzling, frenetic jazz rhythms. Smith says that she wants her music to inspire listeners to think more critically and expand their minds. And if her truth makes some people uncomfortable, so be it.

“I was never given a choice about what would accommodate my comfort,” she says. “Being a Black woman in this world requires you to often be in uncomfortable spaces. I have chosen not to passively accept that I must allow others to be comfortable at the expense of my humanity or self respect. As an artist it’s not my job to not offend.”