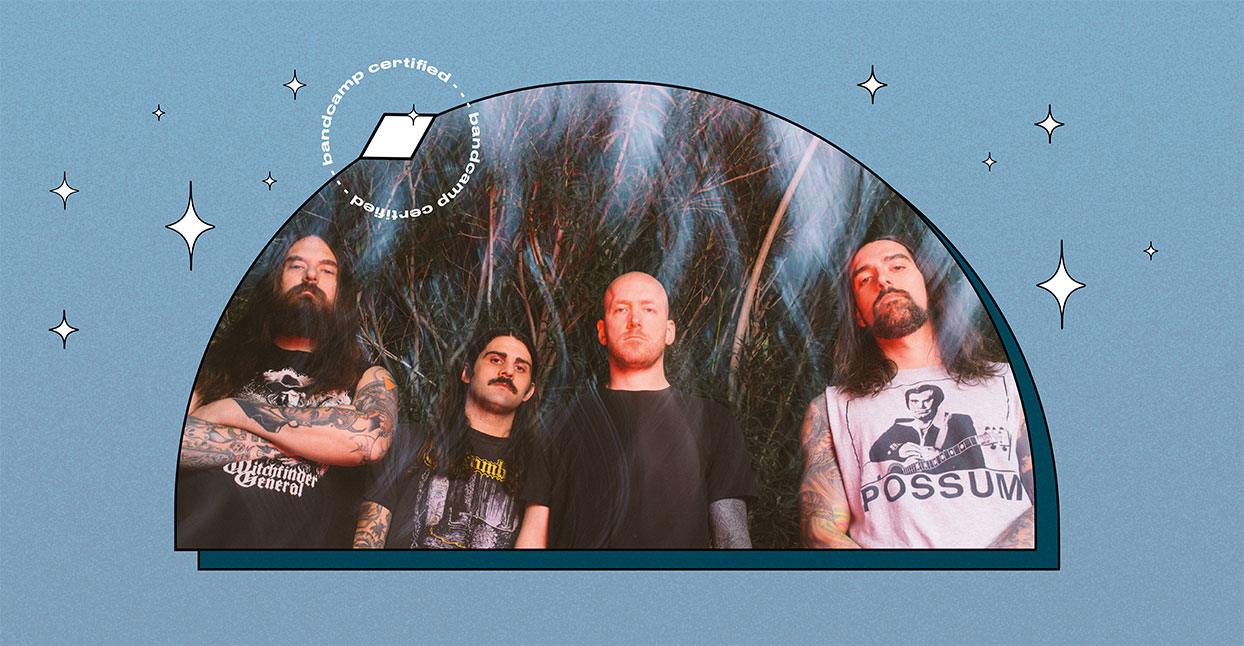 Arena metal. It’s a vivid phrase in search of a practical meaning. Outside of a few hallowed names—Metallica, Maiden, Priest—nobody playing heavy music can actually fill an arena these days. That makes the relentless, Sisyphean drive of Spirit Adrift’s Nate Garrett all the more inspiring.

“You can use the word ‘arena,’” Garrett says in response to a sheepish suggestion that Spirit Adrift’s third album, Divided by Darkness, sounds like it should be performed in huge rooms. “Hell yeah.”

Arena-level popularity certainly seems to be what Divided by Darkness is going for. Its eight tracks are some of the biggest-sounding metal songs in years: monolithic crushers overflowing with memorable riffs, lockstep guitar harmonies, passionate vocals, and heroic solos. Throughout the album, Spirit Adrift pay tribute to heavy metal’s glorious, chart-topping past without nostalgia-baiting or devolving into subgenre cosplay. At the same time, it’s aware of its lineage, and it wants to belong to the exclusive club of metal legends. A song like “Angel & Abyss” pulls off no small feat, at once evoking prime Metallica and solo Ozzy while feeling like an immediately canonical achievement in its own right. Or take “The Way of Return,” the instrumental album closer that seems to quote Pink Floyd’s “Dogs,” but also sounds unlike anything on a metal album this decade.

“A lot of people like Judas Priest, a lot of people like Black Sabbath, and I want to be in a band like that, because it seems like a lot of fun,” Garrett says. “When I’m coming up with new material for Spirit Adrift, there are no touchstones involved unless I consider them to be one of the best bands of all time. I listen to stuff that’s just fun or whatever, but the last few years, I’ve been obsessed with what history has proven to be the best music in the broad genre that I’m working.”

Divided by Darkness marks the culmination of that obsession. Ever since Garrett first set pen to paper for the project after getting out of alcohol detox in 2015, he’s been chasing metal’s greatest dragons. On the first two Spirit Adrift releases—the Behind – Beyond EP and debut full-length Chained to Oblivion, both released in 2016—Garrett was attempting to express his classic metal proclivities via long-form doom metal. Priest and Sabbath were in the mix, but by way of Pallbearer and Khemmis. The following year’s sophomore LP, Curse of Conception was the game-changer. That’s where Garrett abandoned genre study and discovered how to sound like himself while still paying homage to his household gods; it garnered the kind of year-end list acclaim that suggests a band is “on the rise.” Divided by Darkness was always going to be a pivotal album for Spirit Adrift, and fortunately, it crushes even the highest expectations. Give Garrett credit for working himself to the bone to make that possible.

“I started writing Divided by Darkness before Curse of Conception even came out,” he explains. “My idea was to write stuff that challenged me to the point that, when I wrote it, I couldn’t even play a lot of it. If I planned in advance on having a lot of time between demoing and recording the material, it would give me a goal to get better at guitar and better at singing so I could perform the stuff at full speed.”

Obsession is a constant theme in Garrett’s life—not an uncommon trait for an addict in recovery—and his obsession with improving his guitar and vocal chops almost sent him into a spiral: “I was like, Am I really trying to make the best album I can, or has this gone to some place that’s completely separate from trying to make art? Am I trying to just torture myself? But I feel much happier now that it’s done and out there.”

Compounding the degree of difficulty was the fact that Garrett played everything except the drums on the album himself. Spirit Adrift boast a rock-solid live lineup that includes Garrett’s Gatecreeper bandmate Chase Mason on bass, Jeff Owens on guitar, and Marcus Bryant on drums, but only Bryant was able to play on Divided by Darkness. That means all those Tipton-and-Downing-level guitar harmonies on the record are the result of a mind-meld between Garrett and himself. When the songs make their way to the stage, they’ll be rearranged for the full band.

“There’s so much going on that we’re never going to be able to fully recreate it,” Garrett says. “I’d say there’s album version of the songs and live versions. [Fans are] paying their hard-earned money to come see us, and I want to give them something a little different, a little special.”

That determination to make the live show something special, even when the record pushed him to his absolute limit, is fully of a piece with Garrett’s drive to forever be improving himself—as a musician, a composer, a person. “It’s like what the old country guys talk about! I’m working on arrangements,” he says, somewhat incredulously.

It should also come as no surprise that with the band fully in the throes of the Divided by Darkness campaign, Garrett is doing anything but taking a break: “I actually have five songs demoed for a new Spirit Adrift album,” he says. But he can’t stop, any more than he can stop eating or sleeping. Garrett has often described Spirit Adrift as a form of therapy. It’s been a mirror for the state of his soul ever since he left that Arizona rehab facility and started writing.