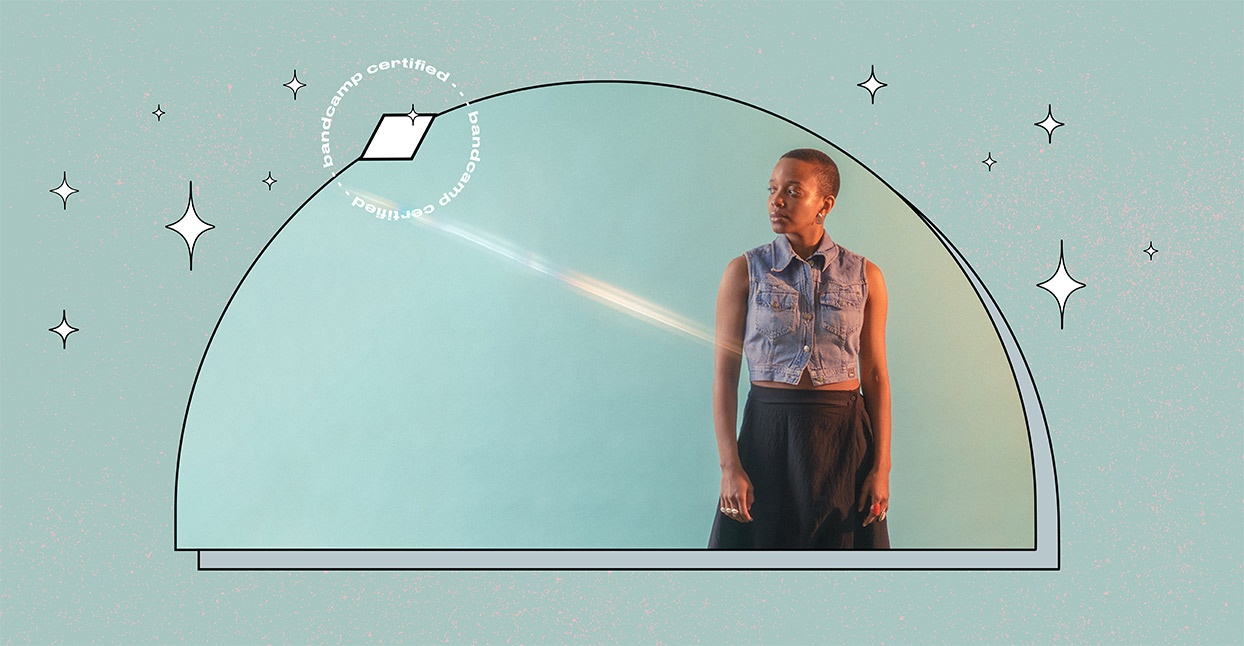 Certified is a new series on Bandcamp where we spotlight artists whose work we think is worthy of additional attention.

Jamila Woods likes to surround herself with artifacts of the recent past. A meticulous researcher of black artistry, Woods devours these artifacts—filmed interviews of Jean-Michel Basquiat found in the recesses of YouTube, or the collected writing of Zora Neale Hurston—repetitiously, then studies them for nuance and relevant bits of wisdom.

“Sometimes I scroll through [my phone] and say, ‘Oh, what are these things I’ve just collected? And how can I apply them to this world?” asks Woods. Her curiosities and interests became the root of influence for her sophomore album, LEGACY! LEGACY!.

If HEAVN was an ode to Chicago and black womanhood told through the prism of contemporary life, then LEGACY! LEGACY! broadens the scope of Woods’s storytelling. There has always been some level of universality in Woods’s tales of Chicago’s Lake Shore Drive and the South Side, but on LEGACY! LEGACY!, Woods peels back a layer, revealing the intricacies of how she works, and utilizing her creative process of research, sourcing, and collecting as the lyrical foundation for her new songs.

“I’m just starting to read Questlove’s book about creativity, and he says, like, ‘I don’t even know if I’m a creative person, because all I do is just look at the work of other people and get inspiration from them.’ That really resonated with me,” Woods says. “I think part of being an artist is that consumption and marination part of it. I’m just trying to lean into that as much as possible, and not feel bad about how much I like being inspired by other people.”

Woods has always surrounded herself with “things,” but now those things have a more prominent place in her music. The song titles on LEGACY! LEGACY! are a veritable “who’s who” of the black creative elite: “GIOVANNI,” the album’s first single, was named for the beloved radical poet Nikki Giovanni. Woods drew on other reference points for the video, which she co-directed, including a film by Arthur Jafa, and the large sculptures of Robert Therrien.

“I try to always stay open to what inspires me and just collect it to see if it will ever be relevant to another idea,” says Woods. “In [“GIOVANNI”], it was going off of the ego trip and poem full of hyperbole and exaggeration—wanting to exaggerate these icon items of black culture. Like, sitting on a huge Ultra Sheen bottle, or having those huge rat tail combs that come from that Robert Therrien piece that I saw, but switching it up and making it my own.”

“ZORA”—named for Zora Neale Hurston—is a richly textured wonder, coupling steady drums with a lovely, layered piano and synthetic melodies, and lyrics that reflect Woods’s strength. “I may be small / I may speak soft / But you can see the change in the water,” she sings.

The accompanying video, created in collaboration with VAM and directed by Vincent Martell, draws on imagery from the track, creating a delicate ode to Hurston’s cultural anthropology and fiction. It’s fitting that the video was shot on location in the Johnson Publishing Archives (home to critical black publications like Ebony and Jet) at Chicago’s Stony Island Arts Bank.

“I feel like [when] making a video for a song, you get a chance to make the world that you saw in your head when you [were] writing the song. Make it come alive so other people can, too,” says Woods. “I didn’t even think about it until later, but just the way that [the Stony Island Arts Bank is] preserving elements of black culture—the Ebony and Jet magazines—and how much of Zora Neale Hurston’s work was also about preserving black culture, like recording folk songs, dialects and things like that. It ended up being really perfect.”

To match the expansiveness of the lyrics, Woods branched out on production, working with collaborators like Slot-A, a Chicago DJ who sent her tracks. She had already begun writing songs—including “GIOVANNI,” “SONIA,” and “FRIDA”—before she met him. “I was like, Oh, I have to work with this person,” Woods says. “We had days where we would sit and talk about the person [the song is named for]. So once we were kind of in it together, it was  fun to be intentional about the sound that we were creating.” Other producers and collaborators on the new record include Saba, Nico Segal, oddCouple, and Peter Cottontale.

In the hands of a lesser artist, Woods’s methods might end up feeling too on-the-nose; as a black female soul musician writing during the genre’s generational renaissance (consider recent critically acclaimed, artistically challenging releases by Solange and Anderson .Paak), finding comfort and influence in the sounds of the past is no surprise.  But Woods navigates beyond mere influence, landing somewhere far more profound. On LEGACY! LEGACY!, Woods positions her new work among the artifacts of those who came before her, suggesting there is a place for her creation among these crucial pieces of black culture. To create in the image of one’s cultural ancestors is to align one’s art in the lineage of its greatness.

Dr. Margaret T. Burroughs, founder of the DuSable Museum and a source of inspiration for Woods, once asked: “What will your legacy be?” For Woods, the answer is easy. “It’s reassuring, I think, to revisit their work and to see how they were able to carve out their spaces of authenticity,” Woods says. “That gives me permission to do the same in my moments in time.”