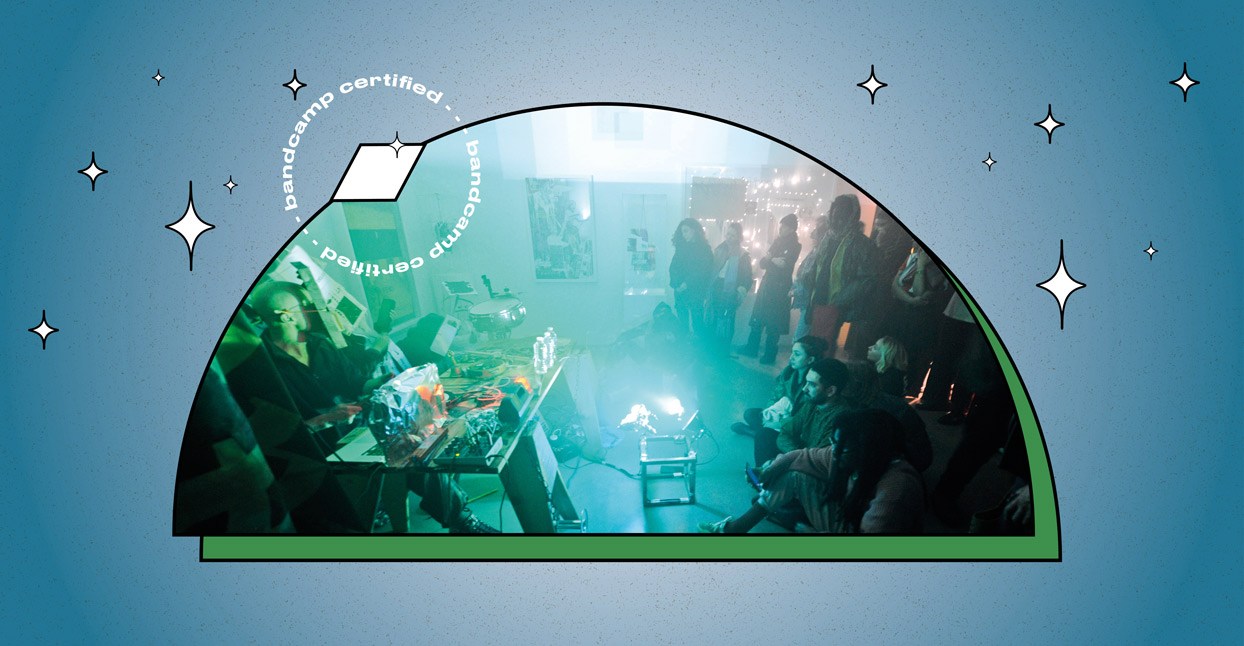 “We have a yin yang of being in the dirt, in the gutter, and being celestial, spiritual beings,” says Justin Tripp, one half of the experimental electronic duo Georgia. He’s talking about Sound Love, a sprawling, 100-minute cassette released on Good Morning Tapes last year, which feels like it cuts to the core of the pair’s musical philosophy. Of its two longform tracks, the first is full of tumbling polyrhythms—playful, noisy, infectious—while the second moves to a slower, more cosmic tempo.

“One side references a street level,” continues Tripp. “You’re jammed into a city with a million other people. The other is reaching to the sky.”

Tripp and Close met at a bar in Soho, New York during the late ’00s. Close was running a graphic design studio, but looking to explore other creative practices. “Even as a graphic designer making imagery, music was always the weapon,” he says. “It was always the thing closest to the ether for me, less understandable. Sound is something with a lot more space, and therefore a lot closer to magic.” The pair began working together more substantially in 2011, forming Georgia not only as a music project, but also as a “creative production center,” with clients ranging from Reebok to Vogue. This represents another of Close and Tripp’s dualities: their ability to traverse corporate and underground culture.

In Georgia’s early years, Tripp and Close slowly hashed out what would become an instinctive practice, involving bits of weird, esoteric gear, acoustic and electronic instruments, filtered through an array of compositional approaches. While Tripp tended towards collecting mountains of kit, Close was keen to maintain organization and cleanliness in their Chinatown working space. “Usually when you walk into someone’s studio, it’s the worst environment,” Tripp tells me. “They’re really masculine, uninspiring environments. Brian was always like, ‘I want a giant white room and I’m bringing one piece of gear and I’m sitting on the floor to play it.’ That’s kind of the ideal, but it’s impossible to attain.”

On the recently released Side Tracks, another cassette made up of two extended compositions, the duo created their own sample pack out of sometimes silly source material. Close recorded a cawing rooster with his iPhone while visiting a New Mexico Earthship, a strange type of retro-futuristic eco-home originally devised in the ’70s. Another was made from filling a cardboard box with garbage and pushing it down the street. Such sounds were manipulated into new shapes, marooned from their place of origin but at home in Georgia’s often generously absurd soundworld.

What endures across all of Georgia’s work is the sense that Tripp and Close both process and enhance their surroundings at the same time: Reality and fantasy sit side by side. “In a sense, it’s a projection of [our] ideal[s],” says Close. “We can walk around the street or drive a car and really feel the world how we want to. That’s the New York we want to see, or the L.A. we want to drive through. That’s what it sounds and looks like.”