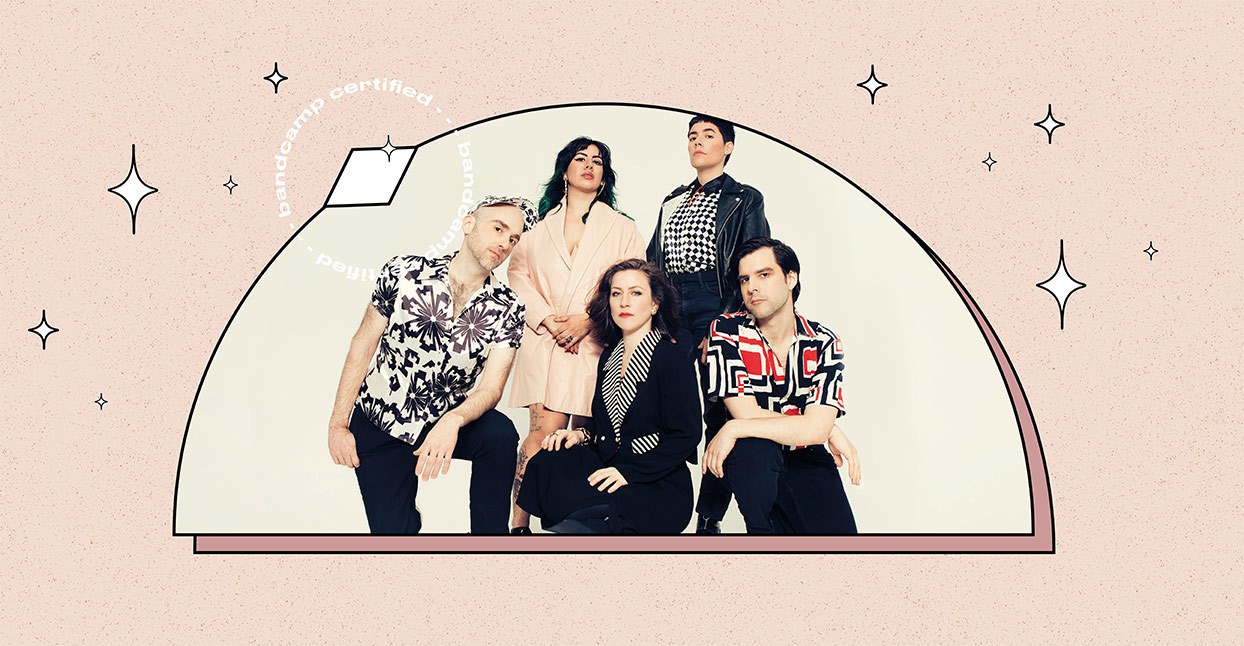 The members of D.C. post-punk party band Gauche can’t stop shouting each other out.

“Gauche is the most fun band to play with because everyone is so good at their instrument and also sound so uniquely themselves,” says drummer and vocalist Daniele Yandel enthusiastically. “It’s a real joy to play with the other people in Gauche because the stuff they play is so fucking sick, and I always want to play along to it.”

“And playing with Daniele, it’s so easy to get in the pocket,” interjects guitarist Jason Barnett. “Our internal timing locks in so fast. Sometimes in other bands there’s issues with tempo, but we rarely have that. It feels really good and natural.”

“I love trying to find the little spaces between the badass drum lines, and Mary is just so good at coming up with really melodic, beautiful things on bass. All you guys rock!” exclaims saxophonist Adrienne Berry with complete sincerity.

Rarely is interviewing a band an inspirational experience, but it’s impossible not to get swept up in Gauche’s admiration for each other, considering what’s on the horizon.

At the time of our conversation, Gauche are a month away from the release of their first full-length, the boldly titled A People’s History of Gauche, on Merge Records. They’re super excited about it, and they should be. A brash racket of danceable post-punk delivered with all the unbridled rage and frustration 2019 deserves, A People’s History of Gauche is a fully formed musical statement of intent from a group who are themselves a little taken aback by how seamlessly their individual strengths as musicians combine to create “this little machine that is the Gauche sound,” as Berry puts it.

“We come up with such good material and it’s usually through jamming and improv. It can feel magical when the group is together. We create stuff so easily,” says Barnett.

Though Gauche are far from the first band to deliver hard truths about sexism, exploitation, and colonialism underscored with bouncy basslines, circular keys, stylish sax, and disco beats, what’s striking about A People’s History of Gauche is its immediacy. This band doesn’t deal in abstracts. They always zoom straight to the point both lyrically and musically, acknowledging feelings of powerlessness while generating good feelings with music that’s defiantly jubilant and celebratory.

“You’re navigating through these institutions that are really against you and trying to figure that out and keeping your head above water without going mad,” says bassist Mary Jane Regalado, who writes the majority of the lyrics. “It’s a tool for survival.”

Everyone in Gauche sings, more or less, and the clamor of voices throughout their spiky songs is a key part of their appeal. On “Pay Day,” a keyboard-driven track with a cracked-up funhouse atmosphere dealing with the reality of living paycheck to paycheck while being exploited by your employer, Regalado sings, “I know I can’t survive like this,” over and over while Yandel retorts, “Shut up, I know!” in the background, the two voices bouncing off each other while sharing a single thought: this is bullshit, and we all know it.

Regalado is a powerful, expressive vocalist in her own right, unafraid to bellow, yelp, chirp, or warble her biting lyrics. On “History,” she just straight-up screams about having her accomplishments stolen by men, her voice nearly breaking with foot-stamping, hair-pulling frustration that’s cathartic in its demand for visibility: “It wasn’t him / It was ME! / MEEEE! / MEEEEEEEE!”

Gauche was formed by Regalado after the dissolution of her former group, Neonates, whom she had played in with Yandel after moving from Los Angeles to D.C. From there, “Daniele and I just kept jamming and we ended up playing with Jason and [keyboardist] Pearie [Sol] and formed Gauche. It turned into a beautiful project where we compulsively did it because it made us feel better,” says Regalado.

“Initially I wanted it to be a feminist supergroup jam band where we’re all rocking with no structure, but then it kind of developed into something with more particular parts,” remembers Regalado of the band’s earliest days. The move to a dancier sound came about from bonding over a mutual love for bands like Girls at Our Best, Dolly Mixture, Bananarama, and Essential Logic.

Gauche’s first EP, Get Away with Gauche was recorded by Barnett and released on Yandel’s Sister Polygon Records in 2015. In seven bright, punchy songs, Gauche established themselves as a band with a distinctive sound with a refreshingly straightforward way of expressing themselves. The band rerecorded most of the songs on the EP, in addition to a few new ones, for A People’s History of Gauche after Regalado asked Berry to join the line-up. “We’re kind of a collective sometime,” says Regalado, who first played with Berry after joining Downtown Boys in 2015. “The model of Gauche is I just invite my friends.”

Berry immediately zeroed in on the band’s core strengths. “As someone who came in a little bit later I thought, ‘Topic-wise this band is on point, but I really want to be in this band because it’s super dancey,’” they say. “It automatically makes you want to jump and move around. It’s a huge draw.”

The addition of Berry’s saxophone on A People’s History of Gauche kicked Gauche’s already-potent party sound into high gear, adding a stylish new wave sheen that integrated perfectly with their existing aesthetic. The upgrade was immediately apparent to the band.

“Once we started mixing [the record], it was pretty clear that we thought it sounded really good and we were really excited,” says Yandel. The record made its way to Merge via a friend of Regalado’s. “They asked if they could share it and we were like, ‘Yeah, but don’t be too obvious about it.’ And one thing led to another. It was a really natural process.”

“Natural” is a word that pops up repeatedly during our conversation, especially when it comes to how shockingly easy it is for the band to write songs. This is a plus since all the members don’t live in D.C.—they’re not even all present for this phone interview, and Berry is calling in from Providence.

“For most bands, songwriting is a lot more frustrating,” says Yandel. “One of the funnest parts of this band is it feels so seamless and smooth. It’s so quick, it builds so quickly in a really natural progression.”

“The lyrics just like came out of my mouth like vomit. It was really simple,” agrees Regalado.

The members of Gauche would know what it’s like for other bands as they’re “all up in” the D.C. music scene: Yandel plays in Priests in addition to running Sister Polygon, Barnett records bands and runs a label, Regalado “plays in like seven bands,” they all book shows. The city offers them an established punk infrastructure and a supportive, all ages scene that none of them take for granted.

“There’s this energy that I’ve never seen in any other city where everyone is so supportive and kind in a way that’s truly special,” Regalado says of D.C., her voice brimming with emotion. “I’m just so scared to leave because I might never find a community like this again.”

While Gauche take their platform seriously, creating good vibes is also a big priority for them. During shows they create a positive party atmosphere by encouraging the audience to dance and taking obvious joy in their own performance. It was something they wanted to translate to the record, overdubbing the intro to “Rent (V.)” with clinking glasses, whoops, and happy chatter after experimenting with the song live. “We just wanted to get the audience excited. It wasn’t on the initial recording, but we were like, we have to put the party vocals on there to set the mood,” says Barnett.

For Gauche, giving their audience permission to party is just as important as sharing in their frustrations, and being honest about their reasons for doing both. “I create art because I want to create a world that I can live in. That pairs the powerlessness with the sense of agency. Creating music that’s really dancey is cathartic because you’re creating your own space in the world that you can exist in,” says Yandel.

We’re lucky to exist in the same world as Gauche.