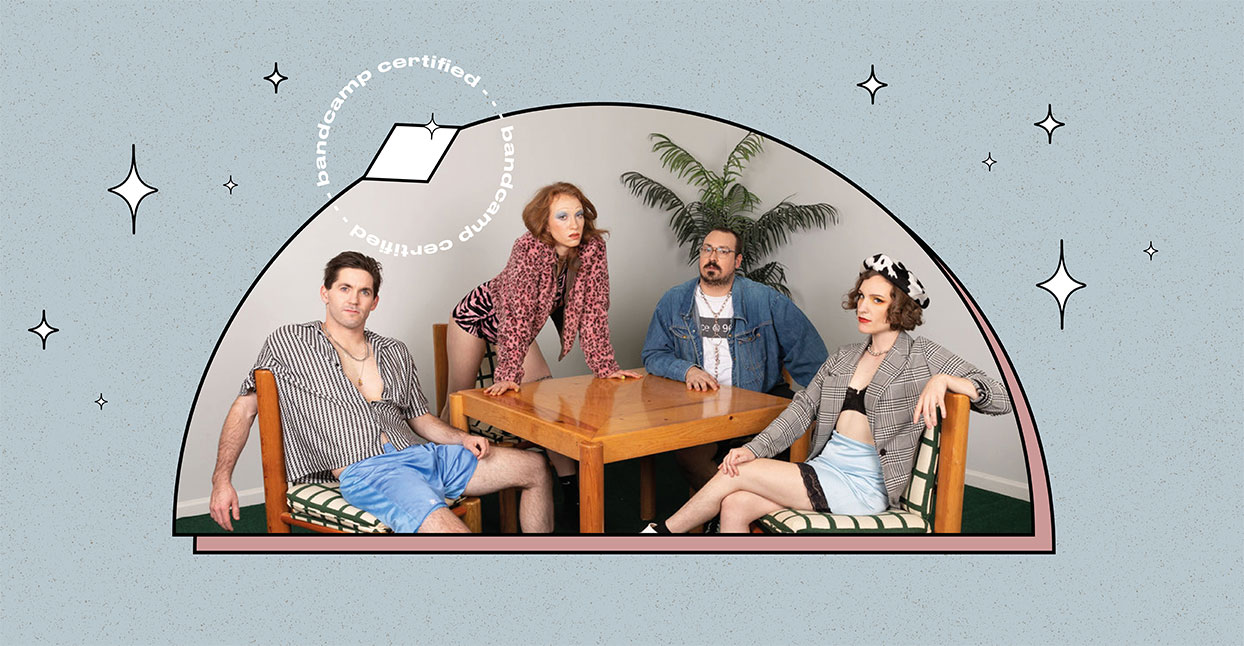 When the four-piece group French Vanilla first met around 2010, the queer punk scene in Los Angeles was flourishing. Acts like Sister Mantos, Little Debbie, Xina Xurner, and Big Bugs were creating space for traditionally marginalized voices, and building a welcoming community among like-minded bands. To the members of French Vanilla, it felt like a refuge from the “bro-y surf rock” that was en vogue in the wider L.A. underground. “Being able to see amazing performers who didn’t care at all about how many people were in the audience, but were [instead] confident in their work, was very inspiring,” recalls guitarist and bassist Ali Day. In love with the energy and inclusivity of that community, Day, vocalist Sally Spitz, saxophonist and bassist Daniel Trautfield, and drummer Greg Shilton soon decided to form a band of their own.

French Vanilla’s brash self-titled debut reflected the casual nature of the group’s origins, built on defiantly lo-fi production and powered by scorching energy and in-your-face lyrics. But for their follow-up, How Am I Not Myself?, the band decided to add studio polish to their punk roots, tapping Sean Cook (St. Vincent, Sharon Van Etten) as a producer instead of doing it themselves. “It’s an extension of the first album in spirit,” says Spitz. “[But sonically,] we wanted to entertain ourselves and seek creative fulfillment, making music we could enjoy in-process.” That meant coming to terms with the fact that more refined production isn’t necessarily a bad thing—especially if a crisper sound is the best way to capture the band’s musical development.

And the band has developed; How Am I Not Myself?, which took two years to make, is built on groove-oriented tracks that blend elements of post-punk a la ESG and Essential Logic with disco, new wave, and pop. Album opener “Real or Not,” a song, fittingly enough, about seizing opportunities to change, eases listeners into the band’s fuller sound: Trautfield’s sax lines dance around Shilton’s slippery rhythms, and the bouncing bass notes pogo in between. A sassy saxophone melody on “Bromosapien” and the elastic walking bassline on “Suddenly” have all the swagger of camp pop—a genre French Vanilla started exploring after falling for Eurodance group Vengaboys—without overblowing it to the point of becoming pure kitsch.

But that giddy music is just the neon-colored set dressing for serious themes. Take “All the Time” for example, a song in which Spitz comes to terms with her own sexual identity. During a tour with U.K. dance post-punk trio Shopping, Spitz found herself falling for frontwoman Billy Easter—despite spending half of her 20s in a committed relationship with her boyfriend.

“My whole life turned upside down,” she says. “Basically, music became a clear priority in my mind, and my sexual identity became more defined. It was painful and generative at the same time, and I feel like I’m a better musician for it. My boyfriend and I never fought, but all of a sudden I was opening up space for a more ambiguous path. It was difficult to realize, because I was leaving behind a home life that was extremely comfortable. I had a sense of a queer identity since I was little, but because of my upbringing and the way I was socialized, I spent my life assuming a heterosexual identity and trying to please my parents. [Easter] happened to be a woman for whom I developed sexual feelings, and I started to feel more understanding of myself when I was with her, too. It felt liberating.”

There are dozens of small moments like that on How Am I Not Myself? with Spitz digging deeper into the spectrum of sexuality and identity. On “Joan of Marc by Marc,” she conflates bravery and fear: “The flames that followed Joan of Arc / As she came riding through the dark / Her mouth in the shape of an ‘O’ / Oh how she loves me so.” On “Sensitive (Not Too Sensitive),” she asserts her own self-worth, singing “I won’t sacrifice / What I don’t want to change.” She drew inspiration from her journals, post-therapy ruminations, and canonical queer writers. She was fascinated by two feminist writers in particular: author Dodie Bellamy, whose book The Letters of Mina Harker follows Dracula’s secretary as she’s reincarnated in San Francisco during the AIDS crisis, and philosopher Avital Ronell, whose Complaint: Grievance Among Friends examines the female experience of technology versus the body. Both books factor heavily in the album’s lyrics, which center on a person making a concerted effort to understand themselves.

That the songs on How Am I Not Myself? are ultimately unable to answer the question posed by the title seems beside the point; the fact that French Vanilla are even asking is a reflection of their self-awareness, their honesty, and their drive to keep learning, even when the lessons aren’t obvious. “This process has made me question who I am, what kind of friend I am, and how to improve,” says Day. “It can really break you down at times, but I think in the end, we’ve all become better people.”